Bar One Racing Broadcaster, Kieran Burke previews tonight’s UCL action and outlines some of the most popular offers with punters so far today.

The Champions League returns this evening with matchday three being headlined by a battle of Britain between Liverpool and Rangers at Anfield. The Reds again failed to claim maximum points in the Premier League on Saturday as they played out a 3-3 draw with Brighton, a result that means Liverpool have now dropped points in five of their opening seven league matches. Rangers, meanwhile, have suffered just one league defeat this season, a 4-0 hammering at the hands of their Old Firm rivals Celtic, and they’ve bounced back well domestically with wins against Dundee United and Hearts. However, the Gers were thumped 3-0 by Napoli on matchday two in this competition which means they are already in danger of being cut adrift in this group having also lost their opening game against Ajax.

Amazingly, this will be the first-ever competitive meeting between Liverpool and Rangers and despite the struggles of Jurgen Klopp’s team so far this season, the Merseymen are as short as 1/7 for victory tonight. Rangers caused many an upset during their run to the Europa League final last season, including dumping out Klopp’s old side Dortmund but overall, there does seem to be a feeling that perhaps the Glasgow side are out of their depth slightly at this level and particularly in a group as difficult as this one.

Bar One Racing has a whole host of Price Boosts available on tonight’s game at Anfield, here. 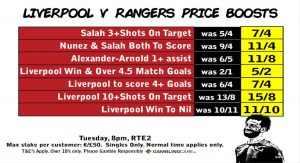 Elsewhere, from a Premier League perspective, Tottenham Hotspur will bid to bounce back from their North London derby defeat when they travel to Germany to tackle Eintracht Frankfurt. Not only are Spurs bidding to react to Saturday’s defeat to Arsenal but of course, Tottenham were turned over by Sporting Lisbon on matchday two in the Champions League. Despite Saturday’s loss being Spurs first in the league this season, many pundits have been unimpressed with some of Tottenham’s performances and this is now a crucial game with Sporting taking maximum points from their first two matches to lead the group.

A little bit like Rangers, who Frankfurt defeated on penalties to win the Europa League last season, there was a fear the Bundesliga side may be outclassed at this level after Real Madrid easily dispatched them in the UEFA Super Cup Final and Sporting thumped Frankfurt 3-0 on matchday one. However, the Germans have since found their feet with a win against Marseille being followed up with convincing back-to-back league wins. That would suggest this may be another difficult night at the office for Antonio Conte’s side.

Be warned Spurs fans, despite your side being marked up as 23/20 favourites for tonight’s game, Frankfurt have taken full points from four of their last five starts as pre-match outsiders across all tournaments. The Germans again start as outsiders tonight at 23/10.

Harry Kane netted yet another London derby goal at the weekend with the England captain continuing to topple records in a Spurs shirt. With Bar One Racing offering Double The Odds on first goalscorer bets on this game this evening, Kane is likely to be extremely popular among punters for the game’s first goal at a price of 7/2. 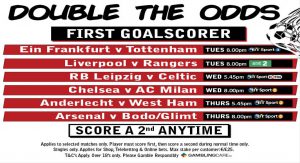 With eight European Cups between them, the meeting of Inter Milan and Barcelona is one for the football purist. Despite their well-documented financial issues, Barcelona look rejuvenated on the pitch under legendary midfielder turned manager, Xavi. The Catalans sit top of La Liga thanks to six wins and a draw from their opening seven matches while Barca fans will still be scratching their heads as to how they left the Allianz Arena with nothing after creating numerous clear-cut scoring chances in the 2-0 defeat against Bayern Munich.

That result makes the double header against Inter an even bigger occasion with both sides vying for a place in the knockout stages alongside Bayern. Inter have lost their last two in Serie A and sit in a modest ninth position. The Italians also lost 2-0 to Bayern in this competition and will have to be at their best to keep the evergreen Robert Lewandowski under wraps. The Polish striker has bagged 12 goals in just 9 matches since his move to the Camp Nou.

Our latest Football Specials can be viewed here.

Fancy winning a €25 free bet? Simply name ANY player to be booked in tonight’s 8pm matches for your chance to win. Enter via the Bar One Racing Facebook page here. (T&C’s apply)