There are no fewer than THIRTY TWO games taking place across the Europa League and Europa Conference League on Thursday night with Shamrock Rovers, Man United, Arsenal and West Ham among the teams in action.

Starting with Ireland’s only group stage representative, Shamrock Rovers, the Hoops face a stern test as they travel to Norway for a date with Molde. Rovers boss Stephen Bradley has described this as being by far the most difficult game in the group and with the Tallaght club defending horribly during the 3-0 defeat away to  Gent last time there’s got to be some trepidation among the Rovers ranks going into this evenings game.

With Shamrock Rovers locked in an intense title race at home with Derry City, it will be interesting to see how strong of an XI Bradley names in Norway this evening.  Molde are flying domestically, winning 19 of their 24 Eliteserien matches which has given them a 15 point cushion at the summit. With Rovers struggling on their travels in Europe this season, Molde could make light work of the League of Ireland champions.

Erik Ten Hag’s Manchester United will bid to banish the memories of Sunday’s humbling Manchester dervy defeat when they travel to Cyprus to take on the Cypriot cup winners Omonia, who are managed by a certain Neil Lennon. Quite simply, there should be a huge gulf in class between these two sides with Omonia ranked 248th in the UEFA club rankings with Manchester United inside the top 10. United start the game 1/5 in the betting which means it should be a case of how many the English team win by more so than anything else.

Many eyes will be on Ten Hag’s team selection with reports this morning suggesting Ronaldo will again be benched with Martial, Rashford and Elanga the rumored front three for United this evening. Bar One Racing have a number of attractive Price Boosts available on the game. 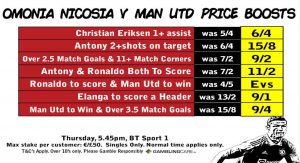 Life is good at Arsenal right now. Top of the Premier League and fresh off the back of a convincing win in the North London derby, the Emirates is once again a happy place. The Gunners have won all four of their home games this season and with Bodo/Glimt winning just one of their last three on the road, this is a good opportunity for Arsenal to keep the feel good factor going.

Mikel Arteta is expected to ring the changes for tonight’s game and this has often been a competition the Gunners have used to give some of their rising talents a taste of European football. Fabio Vieira fits that profile with the Portugese midfielder expected to start in the number ten role for Arteta this evening. Vieria scored in the recent Premier League home win against Brentford and Bar One Racing are offering a boosted price of Vieria to have 1+ assist tonight at 15/8 (from 13/8).

Brazilian striker, Gabriel Martineli has netted 3 goals in just 8 Premier League appearances this season and with the 21-year-old expected to start this evening, he may be worth consideration in terms of a First Goalscorer bet as Bar One Racing is offering Double The Odds First Goalscorer on the game. Martinelli is 4/1 to score first v Bodo/Glimt. 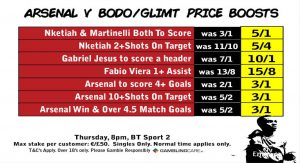 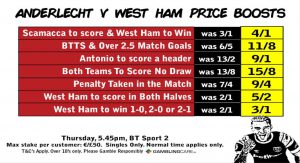 West Ham gained a much needed Premier League win on Saturday evening as new signing Gianluca Scamacca and James Bowen found the net in a 2-0 triumph at home to a struggling Wolverhampton Wanderers. While it has taken the Irons a while to warm to the task in the Premier League this season, the Londoners have taken maximum points in their Europa Conference League group stage so far with wins against FCSB and Silkeborg.

The Premier League side were given a real scare in their last group game against little known Silkeborg with the Danish side taking an early lead and then scoring late to make things interesting as West Ham came from behind to run out 3-2 winners. Anderlecht represents a step up in class in terms of opposition for West Ham but in saying that, the Belgian side have been in poor form by their standards back home with manager Felice Mazzù under pressure after suffering five defeats from the first ten league games this season.

Despite their lukewarm league form, Anderlecht have done relatively well in Europe so far, winning 1-0 at home to Silkeborg and drawing 0-0 away to FCSB. That suggests the Belgian side may prove to be a tough nut to crack for the Irons this evening. Wast Ham have scored just 5 goals in 8 Premier League games this season and while Hammers fans will be hoping Scamacca may be set to catch fire in front of goal, this could be a low scoring affair.

Bar One Racing is offering Double The Odds on First Goalscorer bets for Anderlecht v West Ham with Scamacca heading the market at 9/2. 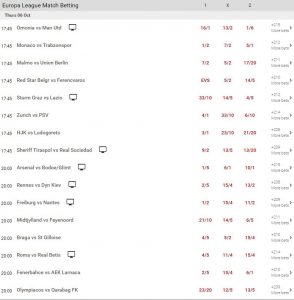 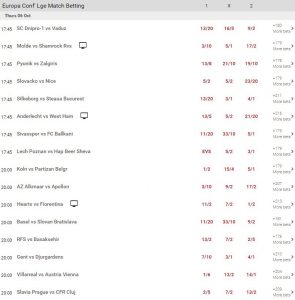