Alan Marron is back with this best bets ahead of an excellent card at Dundalk Stadium on Monday.

What a day it will be on Monday at Dundalk Stadium as we sponsor five races on an excellent eight-race horseracing card that carries €152,000 in prize-money.

Once that is finished, all eyes will be on a greyhound meeting that features the Bar One Racing Irish Sprint Cup Final.

It has been an excellent competition so far, with Serene Ace the standout performer and he’s favourite to land the €20,000 first prize on Monday night. His speed to the first bend has been a sight to behold.

The horseracing starts at 2:10pm and the greyhounds at around 7:30pm for what promises to be a superb day of sport.

I have picked out my three best bets on the day and, hopefully, we will be able to get a winner or two on what looks a very competitive horseracing card.

Scroll down to check out my views on my three selections, and hopefully there will be a few pounds in the punters’ pockets before the greyhounds head to traps for the opener on Monday evening.

The opener on the card is quite a competitive maiden with a number of top yards represented. Aidan O’Brien has a runner in the race but it looks like his son Joseph holds all the aces with a colt owned by Scott Heider and he will be my selection.

GIMMIE SHELTER, who will be ridden by Dylan Browne Mc Monagle,  looks the horse to pay most attention to here. This colt caught the eye in Killarney when finishing third on debut behind Papilio and he looks sure to improve off the back of that. Papilio has since finished second in a Listed race.

While he was green on that occasion, he was a massive eyecatcher and this race looks much weaker on paper. While he will be encountering the all-weather for the first time, it should hold no fears as he is a full-brother to Crossfirehurricane, who won the Kentucky Derby qualifier at Dundalk in 2020, and is a half-brother to My Generation, who won that same Kentucky Derby qualifier in 2021.

I think he should take a world of beating and will be my NAP on the day.

My next best on the card will be in the third race and will be BLAZING SKIES who is trained by Willie Mc Creery and will be ridden by Nathan Crosse.

This filly caught the eye in a race that has worked out really well at Gowran Park on her debut where she finished fourth behind the JP Mc Manus-owned Didnthavemuchtodo. That filly has really franked the form since, having landed a 22k race in Killarney before finishing a close second in the Listed Hurry Harriet Stakes at Gowran Park on Wednesday last.

Blazing Skies improved off the back of her debut when she went back to Gowran Park and was second behind Sistine Madonna, who was an impressive winner on that occasion. She was nearly four lengths clear of the third that day and, if she can improve just a little again, I would expect her to be involved in the finish.

This filly has a nice draw in stall three and, if she can get a good position early, she will hopefully stay on well and get involved in the finish. 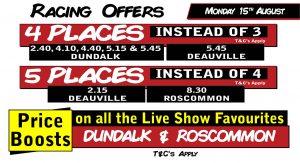 My final selection of three will be the Ger Lyons trained IDES OF AUGUST who landed this race – the €50,000 ‘Red God’ Handicap – last year and will be hoping for a repeat performance this time around.

I have followed this horse on his last few runs and, while he hasn’t been in the best of form, his handicap mark continues to fall and he might be ready to strike. He won this race off a mark of 93 last season and gets in here off a mark of 88 with blinkers applied for the first time.

When he ran at Leopardstown last time out they decided to make the running and it was a strange change of tactics for me considering he had been held up in most of his races prior to that. He has been running in some very strong races and, while this will be another competitive race, I could see him going close.

While many will look at his form and think that he may not have much of a chance, I am hopeful that a return to this surface and the first time blinkers may do the trick. He should be a decent each-way price and will hopefully run well. 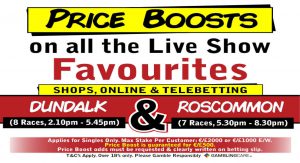