York’s four-day Ebor Festival starts on Wednesday with the Group One Juddmonte International the opening-day highlight. The unbeaten Shadwell superstar Baaeed will step up in trip to a mile and a quarter for the very first time as the world’s highest-rated racehorse seeks to extend his unbeaten run to ten.

However, Baaeed faces some stiff competition in the £1 million showpiece with last year’s runaway winner Mishriff back to defend his crown. While the Gosdens’ globetrotting five-year-old was a tad disappointing in the King George at Ascot, the return to 10f should see him lay down a strong challenge, while the Irish 2,000 Guineas winner Native Trail should not be far away either. 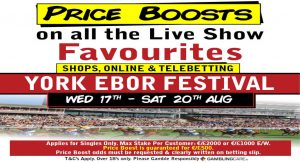 The showpiece event over the next four days is, of course, the £500,000 Ebor Handicap on Saturday, with Paddy Twomey’s recent Listed winner Earl of Tyrone currently heading the Ante Post market. However, Wednesday’s opening race is also a very valuable Heritage Handicap with the winner of the 1.50 contest scooping over £50k for connections.

While all eyes will be on Baaeed’s bid for glory later in the day, should Dakota Gold manage to repeat his 2019 victory in the first race of the day he will enter the history books as the winning-most horse on the Knavesmire with seven course victories. We’re paying SIX PLACES on the 1.50 at York.

The first Group action of the week follows at 2.25 on Wednesday with the Group 3 Acomb Stakes over 7f. Charlie Appleby’s Local Dynasty scored in style on debut in a Newmarket maiden 12 days ago, overcoming greenness to cruise home with plenty in hand which suggests he could develop into a very smart colt. Jane Chapple-Hyam’s Mill Stream was only just edged out by a stablemate of the favourite at Newmarket having already won on debut elsewhere, while Michael O’Callaghan’s Curragh raider Indestructible is another smart-looking sort in a hot race for two-year-olds.

The Group 2 Great Voltigeur Stakes is due off at 3.00 with Charlie Appleby seeking a third win in the race in the last five years with the favourite Secret State on a five-timer. Aidan O’Brien won this with Idaho in 2016 and relies on just one challenger, Aikhal, in this year’s renewal. James Ferguson’s Deauville Legend was only a head behind Secret State in a handicap at Royal Ascot earlier in the campaign but meets the Godolphin runner on worse terms this time around. 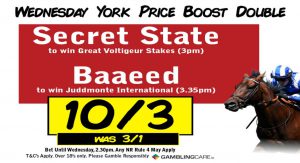 Following the Juddmonte International on the card is a Stayers Heritage Handicap at 4.10. Emma Lavelle is a trainer who knows a thing or two about great long-distance horses and she has the favourite Master Milliner in this two-mile affair. Master Milliner will be seeking a third win on the spin. We’re paying FOUR PLACES instead of three on the 4.10 at York.

There’s a real change of gears as the card reaches its penultimate race at 4.45 with the fillies sprinting over the minimum trip in a valuable class 2 handicap. Ryan Moore is an eye-catching booking on David Evans’ Cuban Breeze, who has been making hay this summer with five race wins, while Pink Crystal and Sandbeck are both in-form fillies chasing hat-tricks. We’re paying FIVE PLACES on the 4.45 at York.

The card then draws to a close with the 5.20 being a nursery over 6f. George Boughey’s Mrs USA was twice behind subsequent Naas Listed winner Lady Hollywood before landing a maiden at Sandown last time. She makes her nursery debut with Will Buick again in the saddle. Finishing a very respectable 8-length 11th in the Windsor Castle at Royal Ascot, Ramazan has since followed up by winning on nursery debut at Haydock for Richard Fahey and looks a player in the finale, while Streets Of Gold is the only unbeaten two-year-old in the line up, having plundered back-to-back maiden and novice events for trainer Eve Johnson Houghton, who has her stable in fine form. We’re paying FIVE PLACES on the 5.20 at York.

With the Yorkshire Oaks to follow on Thursday, the Nunthorpe on Friday and the Ebor on Saturday, don’t forget that Bar One Racing guarantees odds on all UK/Irish racing as soon as prices are made available, meaning you can avail of Best Odds Guaranteed as early as 48 hours in advance of selected races in the UK/Ireland.

Our latest ante-post prices can be found here.

We’ll also be offering Price Boosts on the live-show favourites in every race at York across the entirety of the meeting across all betting platforms (shops, online, telebetting).

Open a Bar One Racing account ahead of the Ebor Festival and you’ll receive a €50 free bet when you stake €10 or more on your first online bet at odds of evens or greater. Our full list of promotions/offers can be found here. 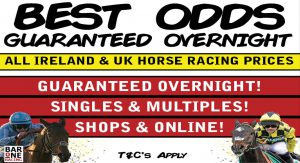