Another excellent Friday night card at Dundalk Stadium with the feature being the EBF Cooley Fillies Stakes Listed Race with dual former winner Surrounding among the declarations.

We had a couple of winners on Wednesday evening with Rocky Dreams (9/4) landing the claimer for the Denis Hogan team and then later in the evening Spilt Passion (7/1) got up in the dying strides at a nice price.

We will be hoping to continue where we left off on Wednesday and get another winner or two on the board.

DIAMONDSINTHESAND could be a very interesting runner here for the O’Shea family having made a very respectable debut at Naas on heavy ground.

He had experienced rivals Carlton Banks and Mickey The Steel in front of him on that occasion but he travelled well and just got tired in the closing stages.

He is drawn wider here but the surface could make all the difference and if he can improve off the back of his debut then I would expect him to go close.

If you take a line of form through the mark of Mickey The Steel then Diamondsinthesand ran to a mark of around 70 and that would be more than enough to see him in contention here.

Check out these RACING OFFERS available today with BAR ONE RACING, including PRICE BOOSTS and EXTRA-PLACE races at DUNDALK… 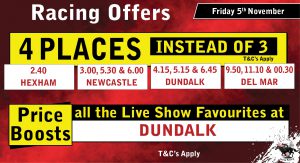 Olivia Shanahan will again be on board TOOREEN ANGEL here and this filly is just too well handicapped to ignore from an inside draw. She is a course winner off a mark of 72 over a mile and a quarter but gets in here off a mark of 63 taking Olivia’s claim into account.

She finished sixth of thirteen behind Kalaroun on her last start where she was slow away and ran on strongly in the closing stages but was never on terms.

I think this time around she might be able to get a handy position tracking the pace and could go close if she gets the gaps in running. She is definitely better over the shorter trip but it wouldn’t surprise me if she was bang there at the finish.

There should be plenty of pace in this race so hopefully Olivia can get a decent spin around and get the gaps and go close.

Barrier trial form will be on show here with ATLANTIC BREEZE who looks an intriguing runner for Donnacha O’Brien and Paddy Hartnett based on his run when fourth to New Energy.

New Energy who is trained by Sheila Lavery franked the form by winning on debut at the Curragh and then ran poorly when down the field being Glounthaune in a Group Three at Leopardstown.

Atlantic Breeze may have come on plenty for that initial effort and I wouldn’t be surprised if we see a strong debut performance.

He has a nice draw in stall nine and Paddy will be claiming seven pounds so overnight market moves will be interesting.

Should go close with luck in running in what looks a very competitive maiden on paper.

The feature of the night is the EBF Cooley Fillies Stakes Listed Race and SURROUNDING who landed this race in 2018 and 2019 before being second to Ummalnar last year will be my selection here.

Michael Halford clearly likes to aim this mare at this race and even though she didn’t show much form behind Masen at Leopardstown last time out, she ran much better the time before when fifth to Pearl’s Galore at Tipperary in a Group Three the time before.

Niall Mc Cullagh catches the eye in regard to the jockey booking  so there is no doubt that connections fancy a decent performance. Her last five runs at Dundalk Stadium have resulted in three wins and two second place finishes so track and trip are ideal.

A decent performance will be expected here.

Gary Carroll and Ger Lyons will team up here with the unexposed OZYMANDIS who should take plenty of beating based on his form shown when second to Eagles Flight last time out.

There is no doubt that there will be plenty of improvement to come off the back of that and it will be interesting to see what the market makes of him. He landed is maiden at this course also when he got the better of the Aidan O’Brien trained Jeroboam.

He looked like he came on plenty for his maiden success and the handicapper has raised him four pounds from 86 to 90. I think there is plenty of room to manoeuvre off that mark and he looks one of the more solid betting propositions on the night.

He will be my NAP on the night and should take a world of beating.

This isn’t the strongest maiden on paper and barrier trial from is again to the fore with the Joseph O’Brien trained filly OSRAIGE. This filly ran a very strong trial when finishing third to Kitty Katana and Tea Party.

Both the aforementioned fillies have run since and the form has been a little bit mixed. Tea Party disappointed at Cork while Kitty Katana caught the eye finishing second to Angel’s Wrath on her first start.

The market will be interesting to see if there is any money for this filly but she could be above average and could give the opposition plenty to think about.

The final race of the night is a competitive contest but ROSIE ROCK who I selected on her last run will be the selection here again.

Nothing went right on her last run when she was slowly away and was out the back under Colin Keane but stayed on strongly without getting to the leaders. The handicapper has put her up two pounds for that latest effort and while that seems a little harsh I think with luck in running she could be staying on late and fast under Gavin Ryan.

She is drawn in stall thirteen and while many will think that will inconvenience this filly I think she might be better dropping in and coming home high wide and handsome.

Hopefully we can end on a winner on what looks a competitive nights racing.