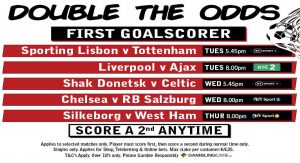 Matchday two in the UEFA Champions League begins on Tuesday night with seven matches taking place around Europe. Having not played at the weekend due to the death of the Queen, both Tottenham and Liverpool are back in action. Spurs play in one of two early kick-offs at 5.45 when the North Londoners travel to Lisbon to play Sporting, while Liverpool needs a reaction to their hammering in Naples last week when they host Ajax at 8.00. Bar One Racing is Double The Odds on First Goalscorer bets on both Tottenham and Liverpool’s games this evening! 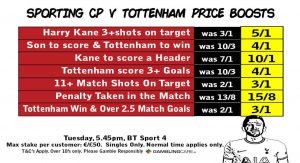 PRICE BOOSTS for Sporting v Tottenham can be found here.

Antonio Conte’s Spurs will be hoping to make it two wins from two when they line out against a Sporting side who enjoyed a comfortable 3-0 win against Germany’s Eintracht Frankfurt on matchday one. Tottenham will have to put in a better overall performance than they delivered in the 2-0 home win against Marseille last week with the Premier League team struggling for large periods. A red card early in the second half for Marseille helped swing the game Spurs way and they’ll be hoping to extend their unbeaten run to 14 matches in all competitions.

Sporting’s record at home to English sides doesn’t make for pretty reading with the Portuguese outfit losing their last three games UCL games at home to nil against English opposition. 23/20 about Tottenham could represent good value given they’ll come into this game with fresh legs. 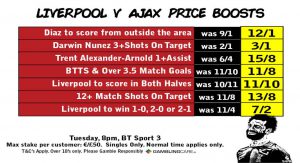 As for Liverpool, the pressure is on at Anfield tonight as group leaders Ajax visit Merseyside. Despite losing some of their top talents in the summer, Ajax are one of the most exciting teams in Europe right now with the Dutch Champions thumping Rangers 4-0 in their first match while they’ve won their last five domestic games to nil, scoring 16 goals. With Liverpool devoid of legs in the midfield, Ajax could heap further pressure on the luckless Reds with Ajax to win & BTTS a big-priced 7/1.

Bayern Munich v Barcelona is the standout tie tonight with the Bundesliga side aiming to humiliate the once mighty Barcelona yet again on the Champions League stage. Bayern have scored at least three times in their last four H2H meetings with Barca, most famously in their 8-2 win in the quarter-finals two years ago. Barca legend, Xavi has turned the Catalan club around since his arrival as manager and they’ve made a flying start to La Liga with four wins and a draw from five matches.

All eyes will be on ex-Bayern striker Robert Lewandowski who has scored 9 goals in just 6 matches since his switch to Barcelona. All in all, goals will be expected at the Allianz Arena with BTTS 1/2. 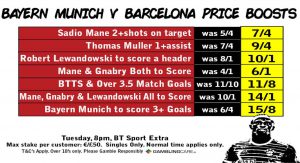 It's the start of matchday two in the Champions League! More specials available on site.