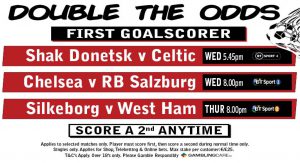 Our latest Double The Odds First Goalscorer matches can be viewed here.

Tuesday night’s action in the Champions League saw Liverpool bounce back to form with a hard-fought 2-1 win at home to Ajax, while Tottenham were stunned by two late goals in Lisbon as Sporting ran out 2-0 winners. The night’s headline fixture saw Bayern record yet another win over Barcelona but it was just a 2-0 scoreline this time compared to some of the hammerings Barcelona have suffered from the Germans in recent years.

Tonight, there’s a bumper schedule with nine games taking place due to Rangers home match with Napoli being pushed back twenty-four hours. The Gers Old Firm rivals, Celtic play in one of the early kick-offs as they travel to Poland to face Ukrainian side Shakhtar Donetsk. Despite going down 3-0 at home to Real Madrid last time, Scottish Champions Celtic matched the reigning title holders for large periods at Parkhead and will be hoping to carry the positives from that game into tonight’s match. A stunning 4-1 win away to RB Leipzig on matchday one for Donetsk indicates what a tough task this is for the Hoops with any sort of result likely to be seen as a positive. Bar One Racing’s Double The Odds First Goalscorer concession applies to this match!

Elsewhere, Graham Potters first game in charge of Chelsea comes at home to Salzburg at 8.00. Chelsea don’t lose all too often in Europe, hence the fallout that followed their defeat in Zagreg on Matchday One with Thomas Tuchel paying with his job. The Blues have been beaten in just 6 of their last 31 UCL matches and with Salzburg winning just 2 of their last 14 games in Europe, this looks an ideal first assignment for ex-Brighton boss Potter. Chelsea are 3/10 to win tonight, with this game also a Double The Odds First Goalscorer match. 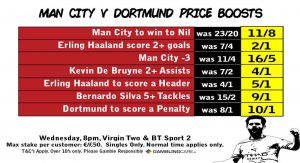 The “Erling Haaland Derby” takes place this evening as Manchester City host Borussia Dortmund at 8.00. Haaland scored 86 goals in 89 appearances for the Bundesliga side while the Norwegian striker has already netted 12 goals in just 8 appearances for Manchester City. As a result, Haaland goalscorer bets will once again prove ultra-popular with punters. Haaland to score 2+ goals is Price Boosted with Bar One Racing from 7/4 to 2/1 with Haaland to score a header pushed out to 5/1 from 4’s.

Among the hot favourites for victory tonight are PSG, Real Madrid, and Napoli. PSG are in Isreal to face Maccabi Haifa, 14-time winners Real Madrid host Leipzig, while Napoli will look to build on their crushing defeat of Liverpool with another win against British opposition in the form of Rangers.