Alan Marron is back to preview another excellent midweek card at Dundalk Stadium.

For those of ye who follow my twitter handle @almarron you may have seen I posted selections for last Friday evening’s fixture on the all-weather.

This is a competitive card, as normal, but if the form works out then we should be able to get in contention with most of the selections.

Siobhan Rutledge is flying high from a double on Friday and she has another really nice book of rides this time around.

KOYBIG (14/1) came back to form last time out in a claimer when he finished third behind Timourid who will be  in opposition again this time around.

He is a frustrating type but classy on his day and it won’t surprise me if he is contention here close home.

Should be tough to keep out of the frame with luck in running.

Here are today’s key HORSERACING OFFERS from BAR ONE RACING, including FOUR EXTRA-PLACE RACES at DUNDALK… 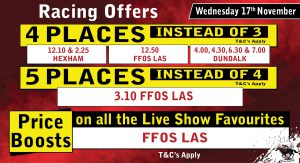 Siobhan Rutledge could be poised for a very good evening and she will be aboard BLANKIEDOODIE (15/2) here for John Mc Connell and has the perfect pitch in stall two.

This horse impressed last time out when winning over course and distance under Killian Leonard to see off Clatter Bang and Boasty. Boasty has franked the form since by finishing third behind Limit Long on Friday last.

Blankiedoodie is up four pounds in the handicap to 49 but that still looks a little lenient to me as he won off 58 at Thurles on the grass back in October 2020.

He looks a solid each way proposition here at a nice price.

It could be a quick double on the night for Siobhan as she will be aboard DUQUESA BEACH (9/4) in this race for Lee Smyth who she rode a winner for on Friday last with Sense Of Romance.

This filly will be suited by the drop back in trip as it looked like she didn’t see out the extended mile and a quarter last time out. On her penultimate run she ran an excellent race to finish third behind Royal Scholar.

There is plenty of positives to be taken from that run as she was drawn sixteen on that occasion and done well to get so close.

She is drawn in stall four this time around and it looks likely that Siobhan could pop out and try and make all on this filly, something that she did to great effect at Gowran Park in June.

Will be very tough to beat and will be my NAP on the evening.

There is no doubt that Henry De Bromhead will have his mind on Gowran Park and Haydock at the weekend but STAR GIRLS AALMAL (10/11) could provide the team with a nice win here.

This filly caught the eye in the Star Appeal Listed Stakes last time out under Chris Hayes when she was only beaten a little over two lengths by Snaffles.

That was her first start under orders but she had run in a barrier trial at Dundalk Stadium when she was victorious seeing off Lisadobber trained by Joseph O’Brien. There is no doubt that she will come on plenty from her last run and she is going to take a world of beating here.

There is one other positive and that is that she will be in receipt of five pounds from likely market rival Trent.

She will take all the beating here.

The fifth race on the night is a tricky puzzle but it could pay to side with MARSA (3/1) who is trained by Eddie Lynam and could get another winner on the board for Chris Hayes.

This filly went into my notebook when she finished second to Exquisite Acclaim over six furlongs here and I really thought she might improve for that and be tough to beat next time out.

She disappointed behind Torn on that occasion but then returned to form when fourth behind Nectaris at Leopardstown in what looked a decent nursery. She will carry joint top weight this time around has a nice draw in stall four.

It wouldn’t surprise me at all if they changed tactics on this filly and went forward with her, I think there  could be plenty more to come from her.

Will be tough to keep out of the frame with luck in running.

STELLAR SPIRIT (EVS) could be a tough nut to crack here in what doesn’t look like the strongest race on paper.

This gelding will be having his fourth start for Jarlath Fahey and looks like he is slowly getting the hang of things having finished second to Spilt Passion last time out.

There was a little money around for him and he ran accordingly just to be caught on the line close home. This horse has some very strong form from earlier in his career when he was trained by Michael Halford.

He was fourth to Swiss Swoo and fifth to Catena Zapata and that should be more than enough to see him get his head in front.

Will be tough to beat here with luck in running.

The penultimate race on the night is competitive to say the least and the Luke Comer trained runner WEE JIM (20/1) could be potentially interesting with Chris Hayes aboard.

The stable have had a decent time of it in recent weeks with victories for Guild and Bradesco and this could be another one on the board. A tongue tie will be applied for the first time and even though this horse is taking a step up in trip I could see it making all the difference.

He finished strongly when fourth behind Dreams Delivered and was doing all his best work in the closing stages. He has only had three starts on the all-weather and it won’t be much of a surprise should he contend in the latter stages.

I am very surprised by the price as I didn’t expect a double figure to be available but he is decent each way value and will hopefully be involved in the finish.

The final race of the night could see Siobhan Rutledge land a treble on the card with NO TROUBLE (11/4) trained by her boss John Mc Connell.

This horse has been a model of consistency in recent weeks and with Siobhan taking five pounds off his back then that could make all the difference.

Taking Siobhans claim into account he effectively runs off the same mark of 60 as he did last time out when he was second under Seamie Heffernan. The track and trip won’t be an issue and I think he could have too much tactical speed for Bradesco who will be dropping back in trip.

No Trouble has seen his handicap mark increase twenty pounds in three runs but I think he is in rude health and with Siobhan on board we could have the perfect partnership to end the night.

Will take all the beating.