Alan Marron is back to preview Thursdays meeting at Dundalk Stadium.

We are back at Dundalk Stadium on Thursday, folks, and it could turn out to be a very informative card with recent barrier trial winners taking their place and, also, some very competitive handicaps.

We are getting ever closer to the start of the Winter Series, which will begin on Friday 17th September and, hopefully, I will have some features on course throughout the winter.

Don’t forget folks to call into your local Bar One Racing Shop and check out all the specials and offers ahead of Thursdays card. If you are not able to make it into a shop you can check them out online or by contacting our Telebetting team.

SISTER LOLA is a very consistent sort around Dundalk Stadium and should take all the beating here with Ben Coen aboard.

She hasn’t been seen since the 15th of July, where she finished sixth to Red Heel at Leopardstown. She has been dropped three pounds in the ratings for that run and the drop down to claiming company should make all the difference.

She finished fourth behind Alhaazm when last seen over course and distance, where she did all her best work in the closing stages after being outpaced early on.

I think this grade is right up her street and she should prove very hard to beat.

Check out these RACING OFFERS we have available today… 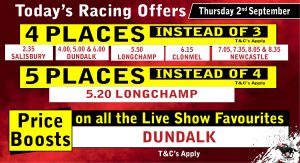 It is quite unusual to see APPROBARE declared without usual pilot Chloe Byrne but it could be a quick double for Ben Coen in a race that shouldn’t take much winning.

Approbare likes to get on with things up front and has some solid form around Dundalk, including when second to Shackleton Hero and fourth behind Zen Silence.

On ratings Thaleeq, will likely take plenty of beating but I think Ben Coen might decide to take Approbare to the front and see if he can see it out.

Small win selection in a race that won’t take much winning.

BEST ODDS GUARANTEED THROUGHOUT SEPTEMBER WITH BAR ONE RACING… 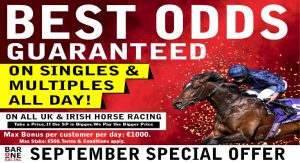 Colin Keane and Joseph Murphy team up with ACQUIESCENT and this filly could be a very interesting runner with blinkers applied for the first time.

She is a course-and-distance winner off a mark of 79 and gets in here off 75. Her last run at Down Royal can be crossed off as the jockey reported that the filly got checked after the road crossing.

When she brings her A game to the table she is a very smart filly and the fact that Colin Keane is booked suggests that a big run is expected.

She has a nice draw in stall two and should be tracking the pace and, hopefully, come with a winning run up the straight.

LIVE SHOW PRICE BOOSTS on the FAV at DUNDALK today … 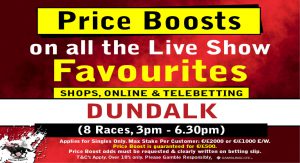 This race is one that I will be paying very close attention to. ANATOLI will be the selection here as he comes into this race off the back of two Barrier Trial victories at today’s venue.

The most recent of them was on the 18th August when he really impressed me, having been keen throughout yet still won in very nice fashion looking like there was plenty in the tank.

He was due to make his racecourse debut at Navan on Saturday last but was a non runner due to having a stone bruise.

I think he looks a very smart recruit for the John Feane team and should take the world of beating here.

**Ed – Second-best in the betting for a race we sponsor is Aidan O’Brien’s New York City, who cost 600,000 guineas and is a full-brother to Group 2 and 3 winner Invincible Army

BROKERS TIP caught the eye last time out at Cork when he finished eight behind Pretty Smart and, with Oisin Orr on board this time, I would expect him to go close.

He is a course-and-distance winner off a mark of 66 (last November) and will be five-pounds lower this time around. He hasn’t really set the world alight on grass this summer but a return to the all-weather could make all the difference.

His three runs at the backend of last year were very solid on this surface off higher marks than today’s. He comes here fresh and looks a very solid each-way proposition.

He has a nice draw and should be tough to keep out of the frame.

This looks to be the trickiest puzzle on the card to solve but the Michael Halford trained-filly HODD’S GIRL caught the eye last time at Naas when she finished fourth to Provocateuse.

That was a step back in the right direction and she looks a solid each-way proposition here. Her last run at Dundalk was a solid run where she finished second behind Ecclesiastical off a mark of 65 with Adam Farragher taking seven pounds off her back.

This time around she is in here off a mark of 66, but is drawn a little bit wide in stall 10. That could really suit her as she will sit in off the pace and then come with a late run out wide.

I would be keeping a close eye on the market but she should be hard to keep out of the frame.

Gary Halpin and John Feane team up here with FOOL PROOF and he looks to have a solid chance off the back of a good run when third to stablemate Art Of Unity last time out at Navan.

That was over five furlongs and the step back up to six should really suit as this horse is a strong traveller and will be hoping for a decent pace to aim at.

He has been dropped three pounds for his last run and, for me, the handicapper might be taking a chance. I really liked the way he travelled into the race at Navan, ultimately finding the hill a step too far.

With luck in running he should be tough to keep out of the frame.

The final race on the day is another of major interest for me as the selection will be STOUR trained by Joseph O’Brien who really caught the eye when finishing third in a recent Barrier Trial.

The Barrier Trials are hard to gauge as you don’t know too much about the opposition but this horse was a real eye-catcher and Joseph is very adept at getting winners off the back of a Barrier Trial introduction.

I am really looking forward to seeing this colt run.

He will be my NAP on the day and should take plenty of beating.