We are back, folks, for the start of the Autumn/Winter series and we will be looking to get a couple of winners on the board this evening. There are a couple of very strong races on the card and, as usual, the usual competitive handicaps.

Make sure you check out your local Bar One Racing Shop for all the offers and specials available for today’s meeting at Dundalk.

NB Bar One Racing have 5 EXTRA-PLACE races available tonight at DUNDALK and will be BOOSTING THE PRICE OF THE FAVOURITE on the LIVE SHOWS in EVERY RACE on the card!   (See below for more details)

We are back on the all-weather at Dundalk Stadium and the first race on Friday is a very good-looking two-year-old race.

HMS ENDEAVOUR is the selection as he looks like he has plenty of potential and should improve off the back of his all-the-way success at Navan.

He kept on strongly at Navan and I can see similar tactics being adopted here.

With Seamie Heffernan booked and a nice draw in stall four he could be tough to catch. Two of the opposition, Anatoli and Pennine Hills, both ran at the weekend so the run could come too quick for them.

While the Ballydoyle battalions could be in better form (although they did have a double at Naas on Thursday), I expect this horse to go very close.

Jessica Harrington has had her team in exquisite form in the last two weeks and herself and Shane Foley could be in line for another winner here with EXQUISITE ACCLAIM who will wear first-time cheek-pieces.

This horse finished fourth behind HMS Endeavour at Navan last time out and could find the six furlongs around Dundalk much more to his liking.

He travelled well but struggled to see it out behind some speedier sorts.

He should come on plenty for that run and, with the stable in flying form, this horse will be hard to keep out of the frame.

Check out these RACING OFFERS available today with BAR ONE RACING… 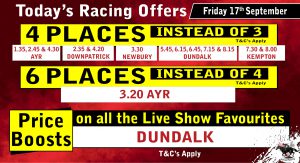 The first handicap of the night and the Edward Lynam-trained LINUS LARRABEE gets my vote with Declan Mc Donogh in the saddle.

He doesn’t have the worst of the draw in stall 10 but will need plenty of pace in the race as he needs to come through them late and fast.

While he has only one victory to his name, a second one may not be too far away. With luck in running he should be far away.

Tough to keep out of the frame.

PRICE BOOSTS on the FAV on the LIVE SHOWS in EVERY RACE at DUNDALK TODAY!   8 RACES; FIRST RACE, 4:40PM 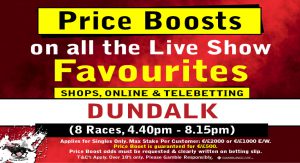 This handicap is split into two divisions and has some of the regulars that we will see throughout the winter.

MISS CUNNING is trained by Kevin Prendergast and showed a little more spark last time out when finishing sixth behind Pride Of Pimlico.

She has been dropped four pounds for that run and, with Gary Halpin taking over from Jessica O’Gorman, I could see her running a decent race. She will run off a mark of 54 here and, with luck in running, I think she will be involved in the finish.

She is drawn in stall one and could be dropped in and then come through with a late run.

Keep an eye on the market but I would be disappointed if she isn’t involved.

James Mc Auley sends out new recruit BELEAGUERMENT in this race and, if a change of scenery has done him the world of good, then I see him running a very big race.

The booking of Colin Keane really catches the eye, as does a very attractive handicap mark. This horse was formerly trained by John Mc Connell and ran some very solid races around this course.

He is well drawn  and, if he is able to track the pace, then he could be poised to pounce up the home straight. He was placed off a mark of 60 and was a course winner off 61.

He gets in here off a mark of 53 and looks to have a solid each-way chance.

Tom Mc Court has DOLLAR VALUE in flying form and, if he can find some more improvement for the all-weather, then he could prove hard to catch.

This horse has won three out of his last four starts and was very impressive at Navan, but has subsequently gone up 13lbs in the handicap from a mark of 61 to 74.

He will certainly  need to improve again but I think he is in the form of his life and could just get the race run to suit.

His National Hunt rating is 124 over hurdles, and if he can run to anything like that form then he must go close.

I think the Mc Court team could have plenty of fun with this horse over the winter. He will be hard to keep out of the frame here.

JP Mc Manus and Joseph O’Brien combine forces here with a very interesting runner in BENAUD and this horse is going to be my NAP of the night.

He was impressive at Naas on softer ground back on the 8th of May and then stepped up in grade with a very eye-catching run in the Queen’s Vase at Royal Ascot when ridden by Colin Keane. He was given plenty to do on that occasion but stayed on strongly up the straight.

He was outclassed last time when beaten twenty lengths behind Tarnawa and that form has been franked since as Tarnawa finished second to St Mark’s Basilica in the Irish Champion Stakes.

I have had this horse in my tracker for quite a while and, in what is the race of the night, I think he takes a world of beating.

Seamie Heffernan teams up here with John Mc Connell aboard SMAOINEAMH SILE and, if she can improve off the back of her last run in Clonmel, then she looks a solid each-way bet.

She is up a furlong and that should suit as she raced very lazily last time and got outpaced but she stayed on strongly once the penny dropped.

I am encouraged with the fact that Seamie stays on board here and there is no doubt that this filly will be seen a number of times on the all-weather over the winter and tonight could be the perfect time to catch her.

She looks a solid each-way proposition and should be hard to keep out of the frame.