The bottom two meet in the Premier League on Monday night with hosts Leicester City one of only two sides in the top four divisions of English football still searching for a first win of the season. As for Nottingham Forest, they haven’t picked up maximum points since matchday two against West Ham and will arrive to the King Power Stadium tonight on a four-match losing streak. The stats make for even grimmer reading from a Foxes perspective with Leicester on a five-match league losing run, shipping 11 goals in their last two games. Should they fail to win at home tonight, the pressure on manager Brendan Rodgers will surely verge on being insurmountable.

While Forest are enjoying their first top-flight campaign in almost two decades, they did dump Leicester City out of the FA Cup last season when the sides met at the City ground, a 4-1 demolition job which equally had Rodgers under immense pressure at the time. A decent run of form towards the end of the season appeared to steady the Leicester City ship but water was clearly coming aboard in pre-season as Rodgers lost a whole host of key players and didn’t appear to be backed by the club’s board with subsequent reinforcements in the transfer window. Reports have suggested Rodgers has been saved from the sack given the fact he will be due a mega payout should the club pull the trigger and remove him as boss, given some of the transfer fees Leicester have received for players such as Wesley Fofana, Harry Maguire, and Riyad Mahrez in recent years it does beg the question what is going on behind the scenes at the King Power?

Leicester’s inability to defend from set-pieces has been well highlighted for some time now but similarly, Nottingham Forest have struggled to defend dead ball situations with Steve Cooper’s side having conceded more goals from corners this season (5) than any other side.

Regarding team news, Leicester’s Nigerian midfielder, Wilfred Ndidi is expected to recover in time from a minor injury that cut short his international duty. Dennis Praet has been nursing a foot problem but has trained in the lead up to tonight’s game.

Nottingham Forest will monitor Morgan Gibbs-White, who pulled out of England Under-21 duty. Scott McKenna is a doubt because of an injury that kept him out of Scotland’s scoreless draw in Poland with Ukraine.

Over 2.5 goals, 13/20. Given the form of both sides, you couldn’t get behind either with any great confidence. However, with two leaky defences facing off in what is a high-pressure game, we could see plenty of goals. 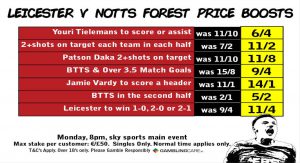 The following Price Boosts are available on tonight’s game here.