Our popular resident tipster Alan Marron is on hand to mark your card for Saturday’s meeting at Bellewstown, which is sponsored in its entirety by Bar One Racing.

The feature race is the Bar One Racing ‘Bellewstown’ Handicap Hurdle, which carries €45,000 in prize-money. The winner of this race will be eligible for a €25,000 bonus put up by Bar One Racing, which they will secure if they then go on to land the Guinness Galway Hurdle at the Galway Festival on July 28th.

With the weights being headed by Grade 2 Scottish Champion Hurdle winner Anna Burnina, the race has a good look to it.

A summary of Alan’s BEST BETS on the card can be found at the end of the piece. We are very much looking forward to a very good day of racing. The first race is due off at 4:35pm.

Bar One Racing are offering 4 Extra Places Races from Bellewstown today as well as giving Price Boosts on the live show favourite in every race on the card! 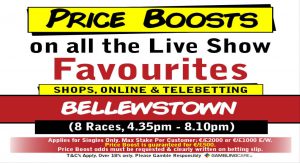 This is a very competitive race for the grade and it may pay to side with PRAIRIE DANCER who really impressed me last time out when making all at Ballinrobe.

He had Douglas DC, who reopposes, and Rebel Step in behind but he never looked in any danger. He finished eighth in the Boodles Juvenile at Cheltenham behind Brazil but looks like he has improved since. He was a decent flat performer, gaining both his maiden and handicap victories at Roscommon.

This track could really play to his strengths as he will likely set off in front and play catch me if you can.

Should take a world of beating here.

RIOGA CHOICE could be an interesting runner at the foot of the weights for the powerful combination of Henry De Bromhead and Rachael Blackmore.

This mare caught the eye on debut , finishing a distant fourth behind Kilcruit at Punchestown and she improved off the back of that on her second start when third in a mares’ maiden hurdle behind Kilbarry Chloe at Wexford.

That was a little over three months ago and its quite interesting that she doesn’t stay against her own sex and, because of this, gets plenty of weight here – a stone from the geldings in the race.

It will be interesting to see what the market makes of her but she might be hard to keep out of the frame if she has improved off the back of a break.

Michael Winters is no stranger to success and he has a very intriguing runner here in DARK SPARK who will be on a three-timer here. This Presenting gelding is extremely well-bred with his dam being the exceptional Voler La Vedette.

If he has half her ability then he won’t have any issue in landing this nice pot. This horse landed a QR race in Listowel before coming home in front at Kilbeggan, staying on well to see off Two Shoe Tom.

There is no doubt that there is improvement to come from this six-year-old and, when the trainer mentioned the “Grimes” Hurdle as his next start, it suggested to me that he thinks plenty of him. The Grimes Hurdle attracted some top names on Thursday at Tipperary so this route may be the better option.

I think this horse will be tough to keep out of the frame with luck in running.

Willie Mullins has a very intriguing runner here, COOLE OG with Paul Townend aboard. This mare hasn’t been seen since she finished fifth under Sean O’Keeffe in a Galway maiden hurdle back in October and, off the back of the break, she could be one to pay plenty of attention to.

When she landed her bumper victory Willie Mullins was adamant that she would need further over hurdles so the step up in trip here looks sure to suit. She finished fourth after that and there is no doubt that the champion trainer will have her well schooled for her hurdling debut.

The market will likely tell the tale but I expect her to be one of the main contenders here.

The first division is a tricky puzzle to solve but it might pay to have a small interest in DAZZLING DOVE trained by Thomas Gibney. This mare disappointed last time out but had been consistent on a couple of occasions before that, having finished fourth at Clonmel and then at Fairyhouse.

She started favourite on her last run but subsequently disappointed. She returns here off the back of a small break and, if that has done her the world of good, then I would expect her to be involved in the finish.

She is lightly raced but could be one of the main contenders if she can bring her A-game to the table.

The second division of this race is similar to the first contest in that it is competitive to say the least, but the one that interests me the most is the Denis Hogan-trained COOLROE LADY.

This mare will be having her first start in handicap company following some decent efforts in maiden company and she looks interesting off a nice mark.

She has been big prices in all her maiden starts but showed much more improvement last time out and the market will likely tell the tale as to her chances.

If she can improve off her most recent start then I think she will be hard to keep out of the frame.

7.40 Bar One Racing Bet In-Play Handicap Hurdle (80-109) of €11,500.00
The penultimate race on the card could bring victory for another local trainer. Harry Rogers and Rachael Blackmore team up with YENILLIK and this horse looks very unexposed for the grade.
This horse was very impressive last time out at Wexford and has subsequently gone up eleven pounds in the weights. The booking of one of the top jockeys in the weighing-room suggests to me that connections are hopeful of a big run. He travelled well through the race in Wexford and this track should play to his strengths.
This will be my NAP on the evening and hopefully punters will be sent home happy.
8.10 Bar One Racing ‘Getting Out Stakes’ Flat Race of €11,500.00
The final race on an excellent card looks to concern the Willie Mullins duo but preference for me will be for UNCLE PHIL with Jody Townend on board.
This horse was very impressive last time out at Kilbeggan when bolting up by fourteen lengths. He travelled really well on that occasion and, if he can do similar here then he should take plenty of beating.
The Donnelly colours are well known in the National Hunt sphere and they could potentially have a very smart recruit on their hands.
If he comes home in front and in impressive fashion I would keep on the right side of him even when he goes over hurdles.
Will take plenty of beating here in the ‘Getting Out Stakes‘ on the night.
BEST BETS ON THE EVENING
NAP: YENILLIK 7.40
NB: RIOGA CHOICE 5.05
EW: DARK SPARK 5.35
TOPICS:Bar One RacingbellewstownGalwayHarry RogersJoseph O'BrienWillie Mullins