Some of National Hunt racing’s biggest stars will be on show over the next five days at the Punchestown Festival and that’s evident on Tuesday, with the respective winners of the Ballymore Novices Hurdle, Queen Mother Champion Chase, and Turners Novices Chase, from the recent Cheltenham Festival, all turning out at the County Kildare venue. (Back our day 1 hot pot here.) 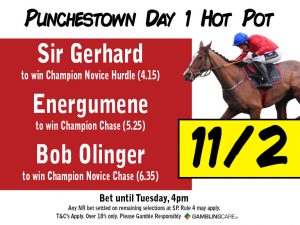 The tapes will rise for the first time at 3.40 on Tuesday with the Listed Howden Insurance Brokers Mares’ Novice Hurdle kickstarting the card. The unexposed JP McManus-owned Dinoblue heads the betting for trainer Willie Mullins with the Mare finishing fourth in a Grade 1 affair last time out. The main threat may come from Gordon Elliott’s Party Central, who has winning course form, while the smart bumper performer Grangee also carries strong claims.

Our first Grade 1 action of the week comes around at 4.15 with the Bective Stud Champion Novice Hurdle taking place over an extended 2 miles. Ballymore hero Sir Gerhard will seek a third straight top-level success with his trainer Willie Mullins also saddling up Dysart Dynamo, who was far too keen before falling in the Supreme.

The first handicap of the Festival follows at 4.50 with JP McManus holding two smart cards in the shape of recent Fairyhouse scorer Glan and Hearts Are Trumps who has landed a handicap over hurdles here previously. Mick Halford’s seven-year-old Ardla is just shading favoritism at present, having run well behind subsequent Cheltenham Festival scorer Banbridge at Navan in January, and having also won a course bumper here previously.

At 5.25, it’s the feature Champion Chase with Willie Mullins again holding all the aces with Energumene and Chacun Pour Soi. The latter made a rare jumping error when coming down in the Cheltenham Champion Chase won by his stablemate 41 days ago but given Chacun’s incredible record on Irish soil, many may give the ten-year-old a chance of turning the tables with Energumene here.

The Goffs Land Rover Bumper is due off at 6.00 and with most of the 16 intended runners making their racecourse debuts, eyes are naturally drawn to Willie Mullins newcomer Rocco Bay and Gordon Elliott’s debutant Caldwell Porter. Irish Envoy won at a fairly modest level on debut at Naas for Elizabeth Doyle but that’s the best form in the book so he has to be respected.

It’s back to the Grade 1 action at 6.35 as the Dooley Insurance Group Champion Novice Chase goes to post. Fortunate Turners winner Bob Olinger will step up to three miles for the first time under rules and if he gets the trip under Rachael Blackmore then he could prove just too classy for his rivals.

The bookmakers could be running for cover come the 7.10 if the Willie Mullins Batallion have scooped up a few trophies already, as the champion trainer also has the favourite for this Cross Country event in Good Bye Sam. Patrick Mullins mount won a Hunters Chase at Tramore last time out and was runner-up to Cheltenham Festival winner and stablemate Billaway earlier this year.

The opening day of the Punchestown Festival concludes at 7.45 with a four-year-old bumper. Once again, there are no huge piles of form to go on here so the betting is likely to be swayed by the days earlier results with Willie Mullins and Gordon Elliott once again holding multiple entries in the finale. 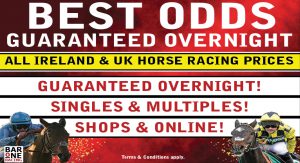 Prices for day 1 of the Punchestown Festival are available in-shop and online now, with the prices guaranteed!