Alan Marron is back to preview Day 4 of the Galway Festival.

What a day we had on Wednesday folks with two winners Nodoubtaboutthat (12/1) and Level Neverending (9/2, well backed from 10/1) from seven selections that ran.

The feature on Day Four is the Guinness Galway Handicap Hurdle (6:15pm).

Willie Mullins is double-handed at the head of the market here and, with plenty of question marks surrounding Tax For Max, FAROUT, who was very impressive on hurdles debut, gets my vote.

He will have to give Tax For Max seven pounds but that horse is his own worst enemy by racing keenly and exerting too much energy in the early stages of his races.

Farout was well behind his stablemate when making his debut for the yard in a Grade Three at Fairyhouse but looked to have really progressed off the back of that when absolutely bolting up at Cork in May.

If he improves again then I think he is a very smart individual who could take all the beating here.

This is not the easiest race in the world to try and solve but the John Mc Connell-trained runner STREETS OF DOYEN could be the one with the most improvement to come on chase debut.

This horse is the youngest horse of the runners at the head of the market and he arrives here off the back of what was a very decent hurdling campaign last season which included a place in Grade One company in the Albert Bartlett at Cheltenham before finishing fourth at Aintree.

He has been off since Punchestown and should be nicely freshened up for this run. I think he has more scope for improvement and, as long as the ground doesn’t get very soft, then he looks the value of the horses at the head of the market.

He should be hard to keep out of the frame if he jumps with some fluency. 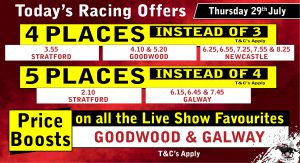 It could be a quick double for Willie Mullins on the evening as himself and stable jockey Paul Townend look to FAN DE BLUES to land this Grade Three prize.

This horse was mightily impressive last time out around Punchestown back in May when to skipped round in front and made all. He had finished well down the field the time before behind Asterion Forlonge and there is nothing of that calibre in this race.

I think Paul might take the bull by the horns and pop off in front and put his experience to good use. Galway is the sort of track where front-runners could get away off the front and Paul Townend adopted them yesterday aboard Royal Rendezvous to land the Galway Plate.

He will be able to fill this horse up for the two fences in the dip and hopefully quicken away to win nicely.

Takes all the beating here. 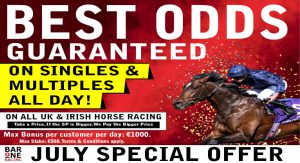 SKYACE has been a revelation for the Birdinthehand Syndicate and Shark Hanlon and, with the ground conditions in her favour, she looks a bit overpriced here for me.

She is a Grade One winner from Fairyhouse last season and a reproduction of anything like that form makes me think she could surprise quite a few in this.

She travels well in her races and ran an excellent race at Cheltenham in the Mares’ Novice when she finished fourth staying on strongly at the death.

This type of race looks right up her street, they will go a decent gallop and as long as she can get into a handy position and get some luck in running all the way, then she will be the one staying on when the others have cried enough.

It would be an incredible story if she could win but she looks nicely-weighted off 10-9 and should be tough to keep out of the places.

CONVARA could be one of the most interesting runners in this race considering he is the only course winner in the field.

He is rated twelve-pounds higher over fences and, with Cathal Landers aboard claiming another three pounds off his back, then, for me, that leaves him nicely handicapped.

He hasn’t been seen for 238 days but that wouldn’t worry me as he is now with a new yard and finished second on his first run last season off the back of a break.

It is a very tricky race to try and solve, but if he arrives here in decent form then he has a nice weight and could be one to keep a close eye on in the market.

Should be tough to keep out of the frame.

Willie Mullins could be poised for a decent day four at the Galway Festival as his runner here,  M C MULDOON, with his son Patrick on board, looks the one to beat.

This horse was a very unlucky second at Royal Ascot last time out and the step up in trip over hurdles looks sure to bring out the best of him.

Patrick knows this horse well, having ridden him back in the spring to finish second to Echoes In Rain and then third behind El Barra.

I think the difference this time around is that they will go a slower pace and he should be able to jump with more fluency.

He could be much better stepped up in trip and I think he will take a world of beating with race fitness on his side.

He will be my NAP on Day Four.

It could be another Mullins winner on the card, but this time around it could be Thomas Mullins and Jack Foley who team up with IT COULD BE YOU.

This gelding ran an excellent race at Ballinrobe last time out when third behind Julie’s Stowaway and that form should be more than enough to put him in contention here.

What I liked about that run is that he never shirked the issue and was finishing his race out well even though he got slightly outpaced.

He has only been put up a pound for his last two runs and both of them have been very consistent.

The uphill finish at Galway will surely play to his strengths and, if Jack can have him close at the back of the last, then the stamina should kick in.

He looks a very solid each-way proposition and will be tough to keep out of the frame.

Much like the penultimate race on Wednesday evening, it will be whether you can pick the correct Willie Mullins bumper horse, and while I went for Patrick Mullins on Wednesday I am switching allegiance this time around suggesting that Jody Townend may be on the likely winner.

CARFAX looks a very interesting runner based on the form shown when finishing fifth behind the very exciting Classic Getaway.

The heavy ground and the two-and-a-half-mile trip may not have been ideal and a drop back in trip here on slightly better ground could make all the difference.

The Mullins brigade will be out in force on Day Four at Galway and, hopefully, this means we will end the day on a high.