The 2022 FIFA World Cup kicked off yesterday with a rather drab opening affair in truth as controversial host nation Qatar were utterly outclassed by Ecuador. The 2-0 scoreline flattered the hosts who now face a major uphill task with games against Senegal and Holland still to come.

Day two of the World Cup promises far more with both England and Wales starting their group-stage campaigns.  The three lions are involved in the opening game of the day at 1.00 as Gareth Southgate’s men tackle Iran in what will be the nation’s first-ever H2H meeting. England cruised through qualifying, avoiding defeat in their ten matches while they also posted the best goal difference of any European nation (+36).

Such a record makes England’s relegation from league A of the Nations League all the more surprising but a good World Cup campaign and that will quickly be forgotten. England have been very consistent at recent major tournaments, reaching the last four in Russia four years ago before losing out to Italy on penalties in the Euro 2020 final last summer. However, Gareth Southgate has a number of defensive issues hanging over his head going into the World Cup with the form of Harry Maguire of particular concern. Southgate seems determined to stick by his man but with Maguire barely featuring at Manchester United this season Southgate must be concerned. Kyle Walker is also expected to miss the opening game through injury with Southgate expected to play a back three containing Maguire, Eric Dier, and John Stones.

While there’s likely to be plenty of negativity surrounding the selection of Maguire and Dier, both offer a threat in the opposition penalty area and with England having scored 12 of their last 18 World Cup goals from set-pieces that could be an area they can exploit.

Iran are coached by ex-Manchester United assistant Carlos Queiroz with the Portuguese coach leading his team to encouraging friendly wins against Uruguay and Lebanon in the buildup to the tournament. England start as heavy favourites today at 2/5. 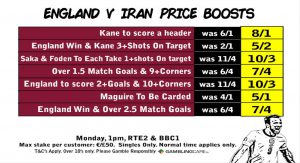 At 4pm, the Netherlands begin their bid to win a first World Cup title as they take on a Sadio Mane-less Senegal. The absence of the Bayern Munich star will have come as a hammer blow to the Africans with the Dutch hot favourites for the game given they’ve won 11 of their last 14 matches at the World Cup.

Senegal does of course have a history of causing upsets on the big stage with their opening match win against defending champions France in 2002 one of the great major tournament shocks. Going into this tournament as reigning AFCON champions they will be respected by Holland who are 6/10 for the win. 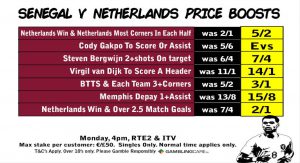 Finally, at 7pm Wales will end a 64-year wait to play at the World Cup finals as the Dragons take on USA in what looks a tough contest to call. Gareth Bale scored all three goals in the play-off wins against Austria and Ukraine to return Wales to the big stage and there’s a feeling Bale will have to shoulder the goal-scoring responsibility if Wales are to perform well at this tournament.

As for America, a 2-0 defeat against Japan and a scoreless draw with Saudi Arabia in the lead up to Qatar 2022 can’t be viewed as encouraging while their tally of 21 goals scored in 14 qualifiers suggests they may also be lacking ideas in front of goal.

In saying that, Wales have kept just one clean sheet in their last 11 matches so this could be an ideal opening match for USA.

Chelsea’s Christian Pulisic (8/1 FGS) is to USA what Bale is to Wales and having scored 21 goals in 52 caps he should carry plenty of threat tonight. Meanwhile, Dallas striker Jesus Ferreira (9/2 FGS) bagged 18 goals in the MLS this season and may feature on plenty of punters goalscorer slips. 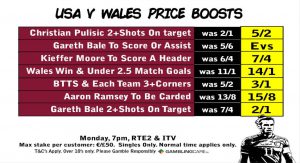