While the usual hectic wheeling & dealing of the League of Ireland winter transfer window is very much still ongoing, we are already starting to form a picture of how the 2022 season may look with back-to-back champions Shamrock Rovers (4/7) once again in pole position to be crowned kings.

Hoops boss Stephen Bradley guided his charges to an unbeaten albeit curtailed league campaign in 2020 but any doubters of the legitimacy of that title success were swiftly silenced as Rovers backed it up again in 2021. It should be remembered, this time last year the Tallaght outfit were dealt a double hammer blow with midfield dynamos Jack Byrne and Aaron McEneff cherry-picked by clubs from abroad yet Bradley found a way to replace them with Danny Mandriou impressing greatly upon his move from Bohemians while the likes of Dylan Watts and Gary O’Neill stepped up to the plate.

Twelve months on and Byrne is back! A move to Cyprus failed to get the best out of the former Manchester City midfielder with injuries and the swift sacking of Mick McCarthy shortly after Byrne’s arrival being major factors. However, there is no doubt Byrne will instantly improve a Rovers midfield who often struggled to break down some of the lesser sides in the division last season who camped in with ten-men behind the ball.

Of the chasing pack, Derry City (3/1) look set to close the gap significantly after an off-season of mega-investment with local lads Michael Duffy and the McEleney brothers of Shane and Patrick both returning to the Brandywell while other notable additions include goalkeeper Brian Maher, Cameron Dummigan, and Brandon Kavanagh.

Despite such star-studded additions on Foyleside, a gap of twenty-four points on Shamrock Rovers from last season is quite a gap to close but certainly, the Candystripes have genuine claims of being best of the rest if not mounting a genuine season-long challenge at the top.

The battle for Europe should prove fascinating once again with St.Patrick’s Athletic (13/2) losing manager Stephen O’Donnell to Dundalk just hours after he guided the Saints to FAI Cup glory. Tim Clancy replaces O’Donnell in the Inchicore hot-seat with his former club Drogheda (66/1) likely to find it tougher this term after a host of big-name departures.

Dundalk (8/1) look set to get back on track after a year of turmoil under American owners Peak6, they’ve hit the road with a new local ownership group at the helm and so far the business done both on and off the pitch suggests the Lilywhites may have their eyes fixed on an instant return to Europe.

Sligo Rovers (12/1) were generally disappointing last season despite finishing third and they look set to lose hot-shot Johnny Kenny to Celtic meaning building on what they achieved last season will be difficult, particularly given the strong investment elsewhere in the league.

Bohemians (12/1) missed out on Europe in agonising fashion both via their league finish and a penalty shootout cup final defeat but the same comment as on Sligo applies with Keith Long set for another major rebuild at Bohs following a raft of exits in recent weeks.

Newly promoted Shelbourne (25/1) adds an element of intrigue with Irish legend Damien Duff stepping into a managerial dugout for the first time. Shels failed to stay up following their last promotion in 2019 so will be keen to learn from the mistakes of the past. Their business has a bit of a safety-first look to it meaning a mid-table finish is probably the goal.

Down at the bottom, it looks a straight battle between Finn Harps (150/1) and promotion play-off winners UCD (150/1) but I’d be reluctant to just write off the Students as whipping boys given they have two of the hottest prospects in Irish football among their ranks in Colm Whelan and Liam Kerrigan, they will cause even the most experienced of defenders in this league major problems.

At the time of writing, I’d have major concerns for Finn Harps given a mass exodus of talent from Donegal with only a couple of rather underwhelming signings announced as of yet. Every year is a battle for part-time Harps to stay in the top-flight and sadly this season will be no different. Drogheda United may also flirt with the drop zone in 2022 but they are certainly in a much stronger position than Harps at present. 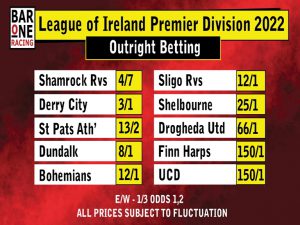