Alan Marron is back to review Sundays card at Thurles where he was on course.

On Sunday 23rd January it was all systems go at Thurles Racecourse for one of their flagship meetings of the season, which featured the Grade Two Horse and Jockey Hotel Chase and the Grade Two Coolmore NH Sires Mogul Mares Novice Chase.

I would like to thank Annemarie Cullen and her team for welcoming me and wish them every success in the future.

It was my first time at the track and I must say I was very impressed. It is a family-owned racecourse and everything was run with extreme precision and close attention on the day.

The parade ring is just spectacular with its wood chippings and, on a crisp day in January, it was quite picturesque. 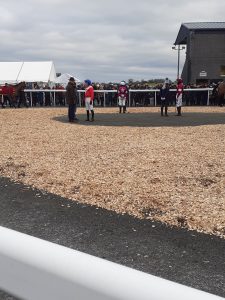 I like to go from parade ring to the stand and then back to parade ring and, at some courses you need to be quick to get back before the winning horse returns; but not at Thurles, where you go back under the stand and across to see the victorious horse in a matter of minutes.

On Sunday, the weather was quite cloudy with a small chill in the air, but the team at Thurles weren’t going to allow that to dampen their spirits.

The food and drink options were excellent with hot port and whiskey among the choices, along with soup and stew to keep the punter warm. There was also a barbecue in full swing and many of the racegoers made good use of that.

The racing itself was top class from race one, where the Noel Meade-trained Pinkerton was successful, right through to Hunter Chase success for Winged Leader in the final race on the card. I will give a brief review of the races now and identify which horses impressed me most on the day.

As I mentioned above PINKERTON (see pic below) was successful in race one and, on his hurdling debut, I was very taken with the manner of victory.

He was extremely relaxed in the parade ring before the race and travelled well for Sean Flanagan throughout the contest itself.

He challenged after jumping the second last and galloped all the way to the line. He is most definitely one for the notebook. 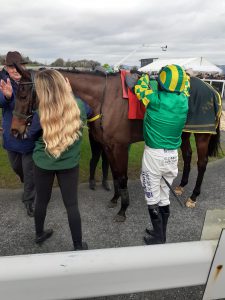 In the second race on the card, we saw the Gordon Elliott-trained GERRI COLOMBE (see pic below) come home in front and, for me, this is the horse from the day that has the most future potential.

He was on and off the bridle throughout but stayed on strongly to get up close home. The contours of the track may not have ideally suited him but he got the job done and there is no doubt Cheltenham will be his next stop.

Without a doubt, he will be a force to be reckoned with over fences next season and, like so many, his Thurles experience will stand him in good stead. 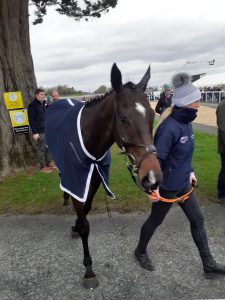 LIGHT BRIGADE (see pic below) landed the third on the card for the Charles Byrnes team and had been well punted from the night before. Jack Foley gave the horse a great ride, coming wide and challenging up the straight. 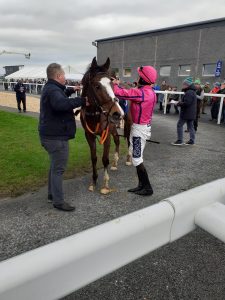 The fourth race on the card was one of the feature Graded races on the day, the Mares Novice Chase, and the market was dominated by MINELLA MELODY (sse video below).

She ran well for her first start in over 300 days but BALLYSHANNON ROSE  was the mare to come home in front for Jack Kennedy, just holding off Jeremy’s Flame in the race to the line.

The next race on the card was the feature and ALLAHO (see video below), trained by Willie Mullins, was the star turn in the race and he didn’t disappoint.

It was a pleasure to see him in the parade ring and his physique is a sight to behold. There is plenty of power there and he knows how to manoeuvre himself over an obstacle.

He galloped his rivals into submission and, despite a small blunder at the last, he was very impressive.

I’d agree with those who think that he looks like one of the Irish bankers on the week at this year’s Cheltenham Festival. And, of course, he won this race at Thurles last year before going on to Ryanair Chase success at the 2021 Festival.

FAKIR D’ALENE landed the penultimate race on the card for the team of Gordon Elliott and Rob James and he looks one to follow as he is a progressive young horse who likes to be prominent and gallop away.

The final race on the card was a race that I really looked forward to. Winged Leader (see pic below) was race fit from victories in the point-to-point fields but was coming up against the Willie Mullins-trained Billaway and It’s All Guesswork from the Gordon Elliott yard.

WINGED LEADER was absolutely electric and never touched a twig as he galloped away from his rivals for a resounding success under Barry O’Neill.

He is one horse to definitely keep on the right side of in the Hunter Chase sphere. 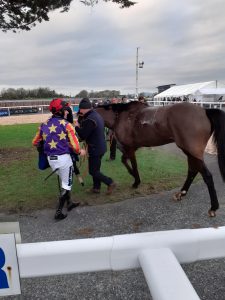 As I mentioned earlier, I am grateful to Thurles Racecourse for looking after me so well and, indeed, for putting on such an excellent day of racing. I look forward to getting back down to that part of the country very soon.