Alan Marron is back to give followers a look at what they can experience at the Irish National Stud.

Folks, I recently visited the Irish National Stud and I must say it is every horse racing fan’s dream as you get to meet the ‘Living Legends’.

The stallions are also a very important part of the breeding operation, and then the mares and the young foals are there also.

They have recently introduced the Irish Racehorse Experience and that is another excellent feature that adds to a great day out.

The stud itself is based in Tully, County Kildare and provides facilities for mares, foals and racehorses that have finished their racing career.

It has a wonderful layout and, with over 1,000 acres of land available, the horses have the best facilities that are available.

The land itself also has cattle and sheep on it throughout the year, and that leaves it in very good condition all year round.

The Stallions are a very important part of the National Stud and these include Invincible Spirit.

Invincible Spirit is the sire of the likes of Magna Grecia, who went on to land the Qipco 2000 Guineas and now stands at Coolmore Stud.

Phoenix Of Spain, who was one of my personal favorites on the track, now also stands at the Irish National Stud. Phoenix Of Spain was a very impressive winner of the Irish 2000 Guineas back in 2019 seeing off the likes of Too Darn Hot and the aforementioned Magna Grecia, who finished fifth.

A list of the other stallions who can also be seen at the Irish National stud are below along with their stud fees. 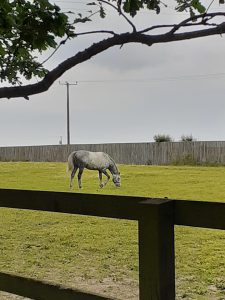 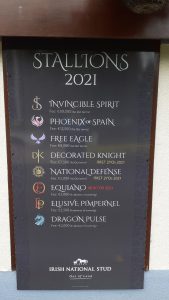 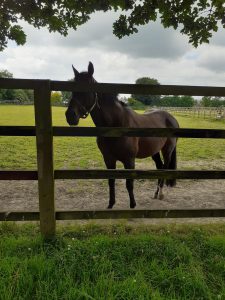 The Living Legends section is a fantastic addition and recently Faugheen has joined the likes of Hurricane Fly, Hardy Eustace, Beef Or Salmon, Kicking King and the only flat horse on show, the former Dermot Weld-trained Rite Of Passage.

The have a large paddock and they get plenty of attention from many racing fans who attend the stud. The day that I was there, it was Rite Of Passage, Beef Or Salmon and Hardy Eustace who spent most of their time with people.

Hurricane Fly was away on his own on the other side of the paddock. To get so close to some of these equine superstars was exciting to say the least. 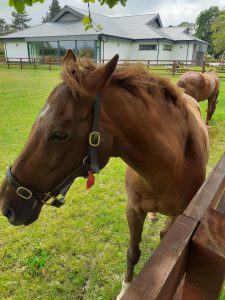 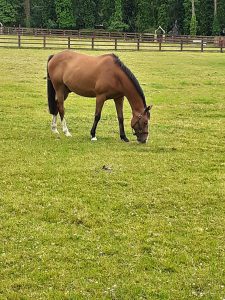 In recent times the National Stud has added another feature which is the Irish Racehorse Experience, and I must say you get to know all about the actual buying and early career of a horse.

You get a headset and a little Ipad to pick your own horse and name it and the final feature of it is to actually ride in a race at Naas. It is a simulator but it is great fun and a must for any racing fan.

Needless to say I would need plenty of practice if I was to take part in a race at Naas anytime soon!

The Irish National Stud is an excellent day out and I would advise any racing fans to book well in advance and check it out.