Alan Marron is back to preview an excellent card from Epsom on Friday.

We are back with an excellent two day meeting at Epsom on Friday and Saturday and I will hopefully be able to get us a few winners on the board. The Cazoo Oaks is the feature of Day One and this is where the three-year-old fillies will get to strut their stuff ahead of the Epsom Derby on Saturday. Scroll down to check out my selections folks.

DON’T FORGET that we are paying EACH-WAY 1/5 THE ODDS on FOUR PLACES in the EPSOM OAKS (4:30PM)

Michael Bell and Oisin Murphy team up with DAIRERIN and this colt is unlucky not to have been coming into this race unbeaten as he was only beaten a nose by Dukebox on his last start at Newbury.

He was a cosy winner the time before at Ripon, where he knew his job and, even though he jinked right at the start, he was very professional and got the job done in tidy style.

They were both on good to soft ground and this ground should be slightly quicker but he has a good draw in stall one and should put his experience to good use.

He looks a very smart juvenile and should take a world of beating.

IRISH ADMIRAL was a winner on his debut for John Feane at Dundalk and then improved off the back of that when he was third in a listed race behind Surrounding at Leopardstown.

He was then sold across the water to join the stable of William Haggas and resumed his career in impressive style at Wolverhampton where he justified short odds.

He stepped up in class at York and travelled like the winner for most of the way and then just flattened out and kept on at one pace in the finish.

He should improve massively off that run and Epsom should suit his travelling style and I think he will finish his race out better.

Should be hard to beat.

Martin Dwyer will team up with William Muir & Chris Grassick aboard PYLEDRIVER and this horse has proved to be a revelation for the yard and could add another nice victory to his CV in Group One company.

He was third in the St Leger behind Galileo Chrome and, with stamina assured, he could be the one to outstay most of his rivals. On his first start back this season he was second behind Sir Ron Priestley at Newmarket and he looked like he would come on plenty for that run.

He was an impressive winner of the Great Voltigeur at York, and if he can get back to anything like that form then I would expect him to go very close here. He has some course form when he finished 11th of 16 in the Derby behind Serpentine, but I think this smaller field might suit.

Will be tough to keep out of the frame with luck in running.

BLUE CUP was a major eyecatcher over course and distance two starts back and, with a hood applied, he could be a different proposition this time around.

He was far too keen at York last time when he finished seventh behind Surrey Pride, but if he can get settled earlier he should go close here with the trip and ground to suit.

He has been dropped a pound in the handicap from his run at Epsom and the booking of Oisin Murphy catches the eye. In my view, his form shows plenty of room for improvement and, hopefully, he can show it here.

Will be very hard to keep out of the frame with luck in running.

The feature of the day is the Cazoo Oaks and Jim Crowley and Roger Varian will team up with ZEYAADAH, who was very unlucky in the Cheshire Oaks, and if she can get some luck in running then I think she will take plenty of beating here.

Jim Crowley noted after the race that for some distance before and after the two-furlong pole he was unable to improve his position on the filly due to being trapped on the heels of La Jaconde.

She did well to finish as close as she did and I think she was the better filly on the day. She was unbeaten in three starts as a two-year-old, culminating in an impressive victory in a listed race at Newmarket.

Like most of the fillies in this race, there should be improvement to come but I think Zeyaadah is a special filly and she could prove to be a very decisive winner. 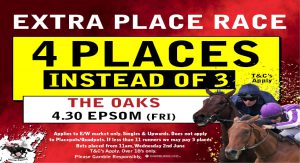 The booking of William Buick aboard the Adrian Nicholls-trained MAMBA WAMBA looks noticeable  if the better ground suits.

She was third in the Redcar two-year-old trophy last season and she looks like he is coming back into something like that form.

This is a tricky puzzle to try and solve but this filly has a nice draw and hopefully she can go close with some luck in running.

William Buick could be in line for a double in the final two races on the card as he gets aboard the David Barron-trained ON A SESSION.

This horse had some very strong form-lines when trained by Aidan Fogarty in Ireland.

He ran a very good race when finishing sixth behind Saltonstall in the Colm Quinn BMW Mile Handicap and a return to anything like that form should see him go close here.

The better ground should be in his favour and the booking  of William Buick really catches the eye.

I would be inclined to keep a close eye on the market to find out whether he is fancied or not but he looks nicely handicapped and should go very close.