Alan Marron is back to preview an excellent card from the west of Ireland featuring the Mayo National.

After an excellent weekend at The Curragh we are back with a full card preview ahead of a quality card from Ballinrobe featuring the Mayo National. Check out my selections and hopefully we can get a winner or two.

Our retail estate is now open so to check out all the specials and offers we have ahead of the Mayo National and much more call into your local shop where staff would be more than happy to help. You can also avail of the specials by checking out our website or contacting our Telebetting team.

GET MY DRIFT IS NOW A NON-RUNNER

Willie Mullins is double-handed here but it could be the Mouse Morris-trained GET MY DRIFT that will take all the beating.

This horse was second last time out behind the Willie Mullins-trained El Barra at Punchestown, but the one piece of form that catches my eye is his debut run at Wexford where he finished third behind Hazran.

Wexford is a sharp track, similar to Ballinrobe, and that is my worry regarding Royal Rendezvous.

Get My Drift arrives here in top form and I think we will be very hard to beat.

Check out these Racing Offers available today with Bar One Racing… 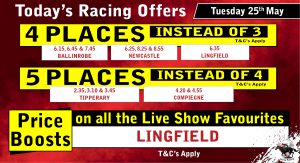 This is not the strongest race in the world and the Henry De Bromhead-trained GATEAU DE MIEL might surprise a few here at a decent price.

He ran well to finish second in a point-to-point at Lingstown for Pat Doyle and made his Rules debut at Leopardstown over Christmas. He dropped away quite tamely after making the running but returns here off a break and he is up in trip.

If he has schooled well over hurdles then the trip and track are sure to suit.

He will be hard to keep out of the frame here.

This is a tricky puzzle to solve but the mare that caught my eye is LA CHANTEUSE who had some very strong form prior to pulling up on her last two starts in Grade One company.

She was extremely impressive on both previous runs having won nicely at Down Royal, getting the better of a very good yardstick in On Eagles Wings.

Even though she has pulled-up in her two most recent starts I think there is every chance that the Crawford team could get her back into form.

On ratings, she looks nicely weight and I think if she can show some of the form from early in the season she looks a solid each-way proposition.

This handicap hurdle is split into two divisions and it may pay to keep a close eye on the market, but there could be a very interesting runner here at a big price – CORNHILL LASS trained by Tom Mullins and ridden by Jack Foley looks to have one of the strongest formlines from early in her career.

She was third to Asterion Forlonge in a bumper at Thurles and a return to anything like that form would see her go very close here.

Her handicap mark has dropped 6lb over hurdles in recent starts and while she is likely to be a big price she could be some solid each-way value.

It could be a double on the night for the Crawford team with the unexposed SKETRICK who ran an excellent race at Perth last time out.

Her handicap mark in Ireland is eleven pounds lower than the UK so, if she can improve off the back of that run, then she looks to be one of the main protagonists in this race.

She lost ground last time at Perth and then stayed on strongly in the closing stages and was also a  little hampered close home.

With no stamina doubts and a nice weight I could see her being ridden close enough to the pace.

She will be very hard to keep out of the frame with luck in running.

Jim Dreaper and Keith Donoghue team up here with the very consistent FORRARD AWAY and, if his jumping holds up, then I think he is going to take a world of beating.

He has some very strong form lines in hurdle company and a reproduction of any of them should see him go close.

He went up a stone in the weights for a very impressive victory at Gowran Park and showed that the increased mark was no issue when he was only beaten close home at Navan.

The ground and the trip won’t be an issue.

He will be my NAP on the night as I think it will take something extraordinary from one of the opposition to beat him.

POPONG heads the market for Henry De Bromhead and Rachael Blackmore and I think that’s where much of my attention will focus in the feature on the night.

If Popong can show anything like the form when she finished second to Colreevy at Punchestown last November, she will be on the mind of plenty of punters to land the Mayo National.

The last time we saw her she ran a cracking race when a fast-finishing third to Brahma Bull at the Punchestown Festival. The handicapper has been lenient and only put her up two pounds.

She will be very hard to keep out of the frame here with luck in running.

Previous race experience can be key in bumpers and the Sam Curling-trained and Derek O’Connor-ridden BALLYGLASS looked unlucky at the course when last seen.

There was plenty of support in the market for him – backed from 14/1 down to 8/1  – and he ran a race full of promise, staying on strongly to finish third.

He was slightly short of room close home and, if he can improve off the back of that run, then he looks to be one of the main contenders here.

He has ½ a length to find with Howyabud on that run, but I think he might be ridden closer to the pace this time and he will know his job better.

Takes all the beating here and will hopefully end the meeting on a high for us.