Alan Marron is back to preview Day 2 of the Punchestown Festival.

What an excellent day of racing we had on Tuesday , Chacun Pour Soi was electric in the Champion Chase and then we took on the “big two” with Colreevy and she was brilliant to get us a second winner on the day.

Scroll down and check out my selections for Day Two. A few big prices lurking for ye.

Due to covid 19 restrictions the retail estate remains closed but you can check out all the specials and offers by visiting our website or by contacting our Telebetting team who would be more than happy to help. 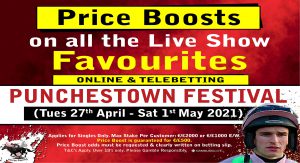 GUIRI looks a very interesting runner for the team of Jessica Harrington and Simon Torrens and will run in the colours of the sponsor JP Mc Manus.

This horse looks to have been laid out for this race considering he hasn’t been seen since Leopardstown at Christmas where he was fourth behind the Willie Mullins trained Dysart Diamond.

Guiri is lightly raced since arriving from Germany and looks the type to appreciate the ground. The handicapper has put him up a pound for his last run and that doesn’t look too severe. Connections are applying cheekpieces and that could make all the difference.

Competitive start to day two but with luck in running I would expect him to go close.

This race looks a very tricky puzzle to solve but the Kieran Purcell trained FAST DEIZ could be an interesting runner back on some nicer ground.

He looked to hate the heavy ground last time when finishing down the field behind Gabbys Cross but had won nicely at Cork the time before on better ground.

His run before that had been franked since as he was beaten by Lignou who went on and won a nice Novice Hurdle last weekend.

He will likely be a decent price but and for that he would be a small each way selection here and hopefully he can get into the frame.

This race has a very interesting look to it and the horse that stands out for me is the Martin Brassil trained FASTORSLOW.

This horse hasn’t been seen for 603 days but is a winner of a hurdle and a chase when trained in France. It will need to be an excellent training performance to get him to go close here but it doesn’t look the strongest renewal and it wouldn’t surprise me if he ran well.

With rain forecast during the day on Wednesday the ground should change to good to soft and that most definitely won’t inconvenience him. He is only a five year old and he could be one to surprise a few here and be staying on when the others have cried enough.

With luck in running should be hard to keep out of the frame.

An excellent renewal of this race and I was keen on the chances of STATTLER at Cheltenham and I think he has an excellent chance of reversing form with Vanillier and landing a decent pot.

He ran in fits and starts at Cheltenham before staying on again late suggesting to me that while he is still learning there is an engine there and this type of track might suit him.

Danny Mullins will be aboard fresh from front running success aboard Colreevy and similar tactics may be adopted here. He ran a very good race when third to Gaillard Des Mesnil at the Dublin Racing Festival and had broken his maiden tag over 2m 4f at Christmas when he had Glens Of Antrim in behind.

I think he could be underestimated in this field and while he has a bit to find he could be staying on late.

Solid each way chance and should go very close.

The feature of the day and this race is simply all about one horse for me. KEMBOY is the only course and distance winner in the field and we all remember that victory very well as it was the last time we seen Ruby Walsh in the saddle.

He was very impressive in the Irish Gold Cup when he had The Storyteller back in second and it was positive tactics that paved the way to success that time and it could be a similar feat here.

Danny Mullins could be in line for a very good week and I am hoping he can set off in front and set his own pace and gallop them into submission. In terms of the official ratings he has three pound to find with Al Boum Photo and Clan Des Obeaux but I think we will see a much different horse than we seen at Cheltenham.

I think he takes the world of beating here and will be my NAP for day two. 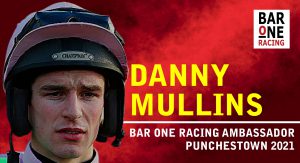 This looks another fantastic race and on paper and betting it will be a match between stablemates SIR GERHARD and Kilcruit.

I have been a massive fan of Sir Gerhard all season and he proved me right when landing the Champion Bumper at Cheltenham under an enterprising ride from Rachael Blackmore. I think tactically the smaller field will suit Sir Gerhard as I think he is a very uncomplicated sort.

Patrick Mullins will be on board this time around and it could be a case of have him handy and use his speed and stamina to get away from his rivals. I think he will be a massive player in the novice hurdle division next season and will hopefully take this race in impressive fashion before being sent on his summer holiday.

Will be very tough to beat.

This is without doubt the toughest race of the day to try and get your head around but the Liam Cusack trained SNUGSBOROUGH HALL could just be coming into form at the right time.

He is a course winner over two miles and with Eoin Walsh taking off a very valuable five pounds he looks one of the main protagonists here. He was last seen running a creditable race in the Topham at Aintree even though he was well behind Livelovelaugh.

The run that really caught my eye was at the Dublin Racing Festival where I think he was unlucky not to finish closer and I think that run can be upgraded.

The track and ground should be in his favour and I think he will be hard to keep out of the frame with luck in running.

Most of the attention for this race will centre around the Willie Mullins trained Grangee but I think there is one mare lurking further down the market that could give her plenty to think about.

Martin Brassil has CHOICE OF WORDS in here and she really impressed me last time out in a bumper for Point to Point mares when she won by 13 lengths.

She looks to have plenty of stamina and that could be the winning and losing of this race. Barry O’Neill has been booked for the ride and that for me suggests that connections are hopeful of a very big run.

She has been consistent in all her runs to date and looks a solid each-way play here and could go close.