Alan Marron is back to preview the feature on Easter Monday which is The Irish Grand National.

Folks the feature of the weekend is the Irish Grand National at Fairyhouse and I am going to look at some of the key trends for the race and select two horses that fit into those trends for some each way value.

Unfortunately our retail estate remains closed  but you can check out all the offers and specials on our website or by contacting our Telebetting team who would be more than happy to help. 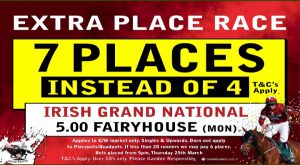 This horse is extremely consistent and comes into this race unexposed. He was a course winner back in January over 2m 5f when he stayed on strongly to beat Lean Araig by an ever widening six lengths.

He has been in really good form over fences and hasn’t been out of the first two in his last seven starts. I think the extended trip could see a little more improvement to come.

He has gone up fifteen pound in the handicap from 127 to 142. He won his point to point over 3m at Tinahely and looks like this trip will be no issue to him.

He will likely have to improve again to contend here but he has a likeable profile.  He could be the type to be staying on at the end and maybe grab a place or a little more. 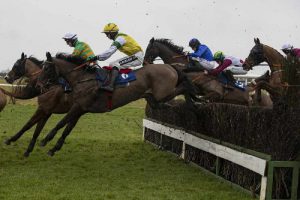 Enjoy D’Allen is improving all the time. Could he contend here for trainer Ciaran Murphy and jockey Conor Orr?

This horse has contested many of the better staying handicaps and remains competitive in them and caught the eye last time out at Naas under Rachael Blackmore in the Bar One Racing Leinster National where he done all his work in the closing stages to finish third.

He hasn’t won a race since 2018 but his record around Fairyhouse isn’t bad at all. We last seen him at Fairyhouse back in 2019 when he finished third in the Porterstown over the same distance as the Irish National will be run.

Everyone will remember Jerry Hannons famous commentary when Roaring Bull came home with a wet sail to land a competitive handicap at Leopardstown a couple of seasons back, Fitzhenry was the unlucky one to finish second on that occasion.

He is back off the same mark as he was that day and I can see him running a big race this time around.

Fitzhenry in the Green & Gold getting collared close home by Roaring Bull.