Alan Marron is back to preview Day Three of the Aintree Festival.

Folks, we have arrived at the pinnacle of the National Hunt Season. The Grand National as always is a very competitive affair but hopefully all jockeys and horses come back safe and sound. Check out my selections below for a winner or two.

The retail estate remains closed due to Covid 19 restrictions but dont worry folks ye can check out all the specials and offers on our website or by contacting our Telebetting team who would be more than happy to help.

We start the final day of the Aintree Festival for 2021 with a very competitive handicap but one horse has caught my eye for a while now and he makes his debut for his new yard today.

BARNAVIDDAUN was formerly trained by Thomas Mullins and was last seen when winning in tidy fashion at Naas beating Damalisque.

That form has been well franked with Damalisque going on to win next time and then run an excellent race to finish third at the Dublin Racing Festival behind Maze Runner.

Barnaviddaun is now fifteen pounds higher than his last winning mark but I think the step up in trip will really suit. He was a prominent racer in Ireland over 2m 4f so it wouldn’t surprise me to see him held up here and come through with a late run.

There has been money floating around for him overnight.

Will be very tough to keep out of the frame here on his first start for David Bridgwater.

Check out these RACING OFFERS available today with BAR ONE RACING… 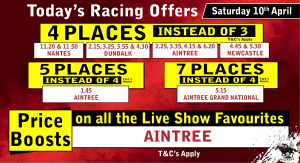 We have had plenty of excellent stories and memories of the National Hunt season but this could be the race that highlights the rapid improvement of a horse from one of the smaller stables.

Ronan Mc Nally sends DREAL DEAL to contest this race from his Armagh base and this horse has done nothing but improve this season.

He has had a mixed campaign between flat and jumps but he is looking to land his seventh race on the spin. He started his winning at Navan off a mark of 84 and to have had aspirations of contesting a Supreme Novice Hurdle at Cheltenham looked miles away at that stage.

Unfortunately he just wasn’t pleasing Ronan ahead of Cheltenham but can hopefully show his true colours here. He is now rated 145 and while having to find a couple of pound with the market principles he will surely go close.

He has the right man on his back in Denis O Regan who will let him travel and produce him late.

For anyone who loves the sport this is the horse everyone should cheer on.

We are paying EACH-WAY 1/5 THE ODDS ON SEVEN PLACES in the AINTREE GRAND NATIONAL, which is due off at 5:15pm… 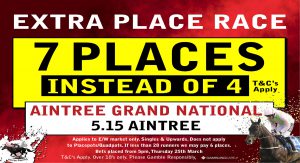 I wont bore anyone with the details of this race. Shishkin was very impressive at Cheltenham and looks like he could take the two mile division by storm next season.

There is not much in the way of opposition here and from a betting perspective it looks a race to watch. If you did want to have a small play I would check out the distance market as some of the chase races this week have already racked up big winning margins.

I found this a very tricky renewal to try and solve but the last time this race was run back in 2019 IF THE CAP FITS got the better of Roksana and Apple’s Jade.

Connections decided to go down the chasing route this season and he put in some very creditable performances before coming back to the smaller obstacles at Cheltenham last time out.

I have watched the Stayers Hurdle back on a couple of occasions and I just don’t think he jumped with his usually fluency. He travelled really well and looked like he was going to contend but then flattened out.

I think the return to this track and on ground that is sure to suit he could run a very big race.

He looks solid each way value at a double figure price and he could surprise quite a few of his rivals here.

MR WHIPPED returns here off the back of a 796 day layoff and starts out with the yard of Brian Ellison since leaving Nicky Henderson.

The last time this horse was seen was at Aintree in 2019 when he finished a well beaten 4th of 6 to Lostintranslation in a Grade One Novice Chase.

He had some very strong form over hurdles most notably lowering the colours of Paisley Park at Warwick back in 2018.

It would take quite a training performance to get him back in that form but if he can show anything like his old sparkle then it wouldn’t surprise me if he stayed on into a place.

He would be a very small each way selection at a decent price.

The world’s best-known steeplechase is now upon us and there is no doubt that I could mention more than one horse for this but I have followed one horse for quite a while now and I think he could get us home in front.

MINELLA TIMES trained by Henry De Bromhead and ridden by Rachael Blackmore really stands out here as a horse that has plenty of ability and has shown improvement this season.

He has been second on his last two runs over 3m and 2m 5f suggesting that stamina shouldn’t be an issue. He was successful at both Listowel and Navan prior to that and on both occasions he stayed on strongly close home.

The team of Henry De Bromhead and Rachael Blackmore could not be in much better form having taken all before them at Cheltenham and this could be the crowning moment for them with Rachael becoming the first lady jockey to land the Grand National.

Emmet Mullins has placed his horses really well this season and his runner here THE GOSSIPER looks very interesting based on his bumper win around Wexford.

He was towards the rear most of the way but travelled strongly and when Patrick Mullins asked him for his effort he quickened and went clear in the style of a very nice horse.

This will be a different proposition altogether but the market vibes are positive and that is always a good sign.

If we take a look back at his Point to Point form he was going to give Killer Kane a race of it at Ballycahane until he came down at the last and Killer Kane who is now with the Tizzard team is thought highly of and broke his hurdling duck at Exeter recently.

I think this is a plan well thought out by Emmet Mullins and I think The Gossiper will be very hard to beat.