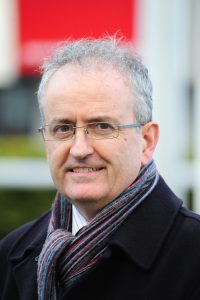 How It All Began

This year, unfortunately, it will be staged without crowds, but in whatever form it takes, it remains one of the most-popular and exciting events in the sporting calendar.

The current track, Prestbury Park, stands in the gaze of the handsome Cleeve Hill in Gloucestershire. Racing was first established on the hill in 1819, although steeplechasing first made its mark there in 1834 with the inaugural running of the Grand Annual Steeplechase.

The Grand Annual was initially run in the Vale of Prestbury. Racing at Cheltenham was then held at a number of venues in the years that followed and was always accompanied by local festivities. Flat racing at Cheltenham ended in 1855.

We have been NON RUNNER / NO BET (I.e. You get your CASH BACK) on the CHELTENHAM FESTIVAL since JAN 6TH

The National Hunt Steeplechase, now run as race five on the opening day of the festival, was first run in 1855 but found its way to Prestbury Park in 1911, by which time it was the third most-valuable race in the jumping calendar and the centrepiece of Cheltenham’s March meeting, which found a permanent home at Prestbury Park, where the festival is still held and forms a naturally-scenic amphitheatre, in 1902.

The fact that Cheltenham races became a key event in the English social calendar owed much to Cathcart’s forward thinking and, undoubtedly, the arrival of Golden Miller. He won the Gold Cup five times in succession from 1932 and, in doing so, found his way into the public’s heart and affections. Just for good measure, he also won the 1934 Aintree Grand National.

On March 19th, Al Boum Photo will bid to become only the fifth horse to have won three-successive Chletenham Gold Cups. Here’s how he won in a dramatic race in 2020…

Al Boum Photo is the hero once again in a thrilling @MagnersUK Cheltenham Gold Cup under a fine @PTownend ride.

A race that promised much, and a race that very much delivered #CheltenhamFestival pic.twitter.com/o3UkpGQoF1

Ireland’s influence at the meeting announced itself strongly after the Second World War, firstly through Prince Regent winning the Gold Cup. He was trained by Tom Dreaper, who would go on to train the legendary Arkle, the winner of three-successive Gold Cups from 1964 and, based on most opinions and measures, the greatest jumper ever to grace the sport.

Between 1948 and 1955, Vincent trained the winners of four Cheltenham Gold Cups, three Champion Hurdles and three successive Aintree Grand Nationals. He then went on to conquer flat racing and his training achievements are without equal.

The history of Cheltenham is full of famous racing names, both equine and human, and competing at the March festival has become an established main target for horses each season. It is often referred to as jump racing’s version of the Olympics, where the best meet the best in Championship races.

It is, of course, more than simply a race meeting, which is why the loss this year to the local economy will be sharply felt.

Ordinarily, four days of racing in March would bring in €60 million to the local economy; on-course betting is estimated to have reached over-€30 million, while the off-course figure is now upwards of fifteen times that amount.

On top of this, around 250,000 people would have attended the fixture and consume vast quantities of tea, coffee, wine, beer, Guinness, beef, potatoes, smoked salmon, and more besides, much of it produced and supplied locally. Ryanair would have scheduled around 50 extra flights from Ireland during the week to accommodate passenger demand.

Woven tightly into the four days, of course, are the deeds of horses, jockeys and trainers. Great names spring readily to mind: Arkle and Pat Taaffe; Dawn Run and Jonjo O’Neill; Istabraq and Charlie Swan; Best Mate and Jim Culloty.

The 2021 four-day Festival will, no doubt, bring with it the usual array of hype, hope, heartbreak and heroes. It is sport at its finest: unscripted drama and glorious uncertainty; athleticism and achievement; colour and spectacle; keen but sporting rivalry; appreciative and knowledgeable crowds.

And, as history tells us, it is likely to provide great excitement, along with some of our best sporting memories.

This year, it will all begin on Tuesday, March 16th.

BarOneRacing.com – the place to be for the 2021 CHELTENHAM FESTIVAL… 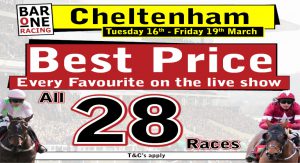