Alan Marron is back to preview midweek action at Dundalk Stadium.

Folks, we have had seven winners across the last two meetings at Dundalk Stadium so we will be looking to add to that here. We are coming to the end of the all-weather season as the turf season gathers pace.

Unfortunately, our retail estate remains closed due to Covid-19 restrictions but you can avail of all the offers and specials on Wednesday by checking them out on our website or by contacting our telebetting team who would be more than happy to help.

With the draw and the weights being in his favour MOTBEQ looks one of the main contenders here for the team of Denis Hogan and Joey Sheridan.

This horse finished behind likely market-leader Poet’s Pride last time out but is much better off with that rival this time around and should go close to reversing the form.

He is quite lightly raced and looks unexposed over the trip as this will only be his third attempt at the minimum distance. For me, the handicapper has been quite lenient leaving him on the same mark of 53.

I think if he can produce a similar run to last time he will take all the beating. 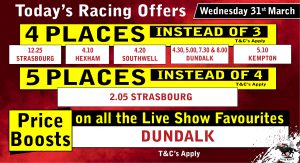 John Mc Connell and Siobhan Rutledge team up here with FALAK and I would be very disappointed if this horse wasn’t in contention close home.

He was successful under Colin Keane off a mark of 54 back in January and was raised six pounds for that victory. Siobhan will claim seven off his back here, so in theory that leaves him a pound lower than his last winning mark.

When a horse like this gains confidence and gets his head back in front, he can take a bit of stopping.

He seems like he is uncomplicated and Siobhan should be able to slot in from the wide draw and let him travel away.

Will take all the beating here.

It could be a quick double for Siobhan Rutledge on the evening as she teams up with DRAKENSBERG who she is looking to land a hat-trick of Dundalk wins.

This horse is really on the improve this season and is now on a mark of 80 and will likely need a career best here in order to win.

In my view I think that is possible; the race itself looks likely to have plenty of pace and this horse likes to travel away and come there on the bridle off a strong gallop.

Siobhan gave him an excellent ride when the pair were victorious last time, getting the better of Ballycaines who ran well over hurdles after that before disappointing on the flat.

There is no doubt that trainer Tony Martin will have this horse in top form.

He will be hard to keep out of the frame. 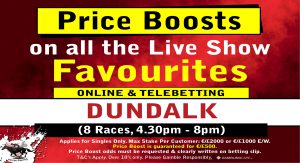 Aidan O’Brien has his team in flying form and is operating off a 60% strike-rate this season so far. We are only in the early days of the season and that is very noticeable considering Ballydoyle are normally slow starters.

BATON ROUGE is their representative here and I am shocked to still see some odds-against being available in the market.

This horse looks a class above any of his rivals and I will be very disappointed if he fails to come home in front here.

Baton Rouge was then seen finishing third behind Erzindjan at Cork where the ground was totally against him.

He is most definitely the one to beat here and it will take a decent performance from one of his rivals to get the better of him.

Paddy Twomey looks to have acquired a very interesting filly in AROHA who will make her debut for new connections here.

This filly was formerly trained by Brian Meehan in the UK and has some very strong formlines. She was third in the Albany at Royal Ascot back in 2019 behind Daayeh when she came home in front on her side but the split was against her.

She was second in a Group Three on her next start and since then she has been extremely unlucky not to have broken her maiden tag.

While the James Mc Auley-trained Meishar looks a big danger I think that Aroha in receipt of five pounds and race experience could have too much for the opposition.

She could be a name to keep an eye on for later in the season but she looks the one beat here.

ZARA MAC really catches the eye here from a good draw in stall one for a filly who has gone forward on her last start when she finished third behind Hazel and Joan Of Arc.

Joan Of Arc has gone on and franked that form by winning at the Curragh on the opening day of the flat season under Ryan Moore.

Zara Mac looks to be improving all the time and it looks interesting that connections are opting for a tongue tie as it might just help her finish her race better.

Her previous two starts were both very nice runs and in front of her on both occasions was Colfer Kay who improved to land the “Birdcatcher” at Naas towards the end of last season.

This filly is going the right way and will be hard to keep out of the frame here.

7.30 FIND US ON FACEBOOK @DUNDALKSTADIUM HANDICAP 7F (DIV I)

The final two races on the night are competitive handicaps and the horse that makes most appeal here is the Ciaran Murphy-trained MANHATTAN DANDY.

While watching back some replays of Motbeq, who will run in the first race on tonight’s card, I noticed Manhattan Dandy staying on nicely over five furlongs suggesting that a step up in trip would look the way forward.

While he is lowly rated off a mark of 41 on the all-weather, he finished second off 45 on the turf at Fairyhouse last season so I wouldn’t be surprised if he could improve on the run behind Poet’s Pride and go close here.

He looks like he could just be finding his way and, hopefully, this race might be run to suit.

Would be a small each-way shout in a tricky race.

The second division of this handicap looks an even tougher puzzle to solve than the first.

Eoin Christopher Mc Carthy has booked Billy Lee for his mare FASCINATING SPIRIT and that could tell us all we need to know.

She is only a pound higher than when winning on the turf at Cork and she has a very good draw here in stall one if she is able to exploit it. She was a massive eye-catcher on her last run when she finished fourth behind Togoville, where she was given plenty to do by Sam Ewing but she battled away and stayed on well.

Togoville franked that form by winning twice after that so that, for me, would leave her well handicapped as ridden a bit closer to the pace she may have got closer to the eventual winner.

I would be hoping Billy Lee might attempt to make all or be very close to the pace.

She looks an excellent each-way bet here and will be tough to keep out of the frame.