Alan Marron is back to preview another fantastic Friday night card at Dundalk Stadium.

Poets Pride, Tooreen Angel, A Case Of You and Alhaazm got us four winners on the board last Friday night if you followed my Twitter handle, where my selections were posted. Hoping to match that this week.

As ye are all aware by now shops remain closed due to Covid 19 restrictions but you can avail of all the specials and offers by checking out our website or by contacting our Telebetting team.

KENDRED SOUL who was successful in a claimer on her penultimate start drops back to this grade after finishing a very close second behind Jered Maddox last time out.

She steps up in trip to seven furlongs and, judged on the way she has settled in her races for her new yard, I don’t see the trip being an issue. Kevin Manning is back on board and she has a nice draw in stall two.

She tends to race prominently in her races so I could see her being close to the pace and challenging inside the final furlong.

Check out these racing offers available today with Bar One Racing, including PRICE BOOSTS on the FAV on the LIVE SHOWS in EVERY RACE at DUNDALK… 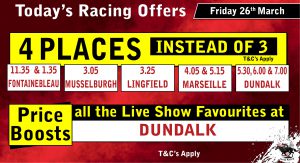 With the turf season back underway the bigger yards are back in business. Aidan O’Brien sends a very interesting runner to contest this maiden and he should take all the beating.

SIR LAMORAK caught the eye when he finished fifth on debut at Leopardstown and backed that up by finishing fourth at the Curragh behind stablemate Arturo Toscanini. He looked like he struggled on the heavy ground on that occasion having been niggled along throughout the race.

I think we could see a much better performance on the all-weather with the quicker surface likely to suit.

He is likely to have improved from two to three and, if he is ready to go at first time of asking, he will take plenty of beating. 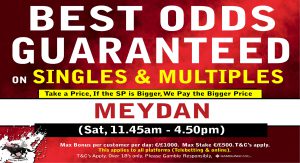 This is very competitive for the grade but NEVER MISTABEAT (trained by Jarlath Fahey) could get back into the winner’s enclosure here having finished second to Everyhouronthehour last time out.

He likes to race prominently and he stays well in his races and he should be close to the pace here considering he is drawn in stall 9. He is three-pounds higher than for his last run but I think he is still improving and there could be more to come.

He has had some time off and will arrive here fresh. Looks one of the main protagonists and will be hard to keep out of the frame.

This is quite a speculative selection but the Jim Bolger-trained HOOK HEAD might be worth keeping a close eye on in the market.

He cost 150k as a yearling and started 9/2 for his debut at Navan where he finished sixth of eight, having been slowly away and finishing off his race quite one-paced behind Hy Brasil.

In second on that occasion was Zanahiyr and we all know that he was a leading fancy for the Triumph Hurdle at the Cheltenham Festival. The fourth horse, Hint Of Stars, has been in fine form in the UK for trainer Kevin Philippart De Foy and has since landed three races in succession. The fifth, Lilli Milena, has also come out and won since.

Hook Head had two other runs towards the end of the season but started at big prices for them and finished down the field. On breeding, the step up in trip to a mile and a half looks sure to suit and he could be a different proposition here. He has also been gelded since his last run.

He would be a tentative each-way selection here if he is ready to go on handicap debut but I would be keeping a close eye on the market. 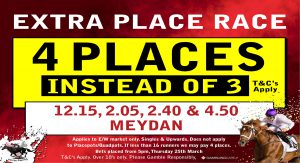 Race fitness can be key around Dundalk and REBEL STEP ran very well on his seasonal debut when finishing fourth to My Generation in the Listed Patton Stakes last time out.

All of the opposition that he will face on this occasion will arrive here on the back of 100-plus days off the track so that might just give him an advantage.

He has some very solid formlines and,if he can improve off the back of the run last time out, he must go close here. He received twelve pounds from San Martino when he was successful in Thurles and this time around they will race off level weights.

I just think that the advantage of course experience and race fitness may give him the edge and he looks the one to follow here.

Andrew Oliver and Conor Mc Govern team up here with second-time handicap starter SENSE OF WORTH.

This gelding ran a race full of promise on handicap debut when finishing second to Pride Of Pimlico when he got headed inside the final 110 yards to be beaten half-a-length.

Sense Of Worth will now be three-pounds better off with the winner and also looks to have the best of the draw on this occasion. There is no doubt that this horse will improve off the back of his first run and that should be more than enough to see him in contention here.

Having watched his last race back, he looks uncomplicated and travelled well.

He will take plenty of beating here in my view.

Togoville is back to try and extend his record at Dundalk Stadium but he sets off at a frantic pace and could set it up for one of the closers.

Johnny Levins and Donagh O’Connor team up with PRISONER’S DILEMMA and he could be doing all his best work in the closing stages.

He was successful over seven furlongs when getting the better of Dark Magic and Tyrconnell back in December and then followed that up three weeks ago when he finished second to Major Power. That form should be more than enough to put him in contention here.

He has been raised three pounds for his last run and, while the drop back in trip is a slight negative, I could see him getting a strong pace to aim at. He has a handy draw in stall two to be able to sit and track the pace.

Could take plenty of beating if he gets luck in running.

ELOSO is a horse that has been in my notebook for a while now and he looks like he could be very hard to beat here on handicap debut.

It is very interesting that the team are dropping back to six furlongs but he has kept some very strong company in maidens in recent weeks and this is a massive drop in grade.

He may have to give weight to the whole field but I think he could just simply be better than what he is up against on this occasion. He finished third behind Benavente and Devi’ls Outlaw and then was fifth of fourteen last time behind Diderot.

That is really strong form in terms of this race and he will take the world of beating.

We will keep the NAP until the final race of the night to finish on a high.