Alan Marron is back to preview Day 2 of the Cheltenham Festival.

Folks, what a day of racing we had on Tuesday. Great for the sport to see Honeysuckle and Rachel Blackmore come home in front in the Champion Hurdle. Hopefully we can get among the winners on Day Two of the Cheltenham Festival.

As ye are all aware my now shops remain closed due to the Covid 19 pandemic but you can check out all the specials and offers either on our website or by contacting our Telebetting team who would be more than happy to help.

Henry De Bromhead has his team in top order heading to the Cotswolds and BOB OLINGER is one of the most exciting novices over hurdles that we will see all week.

He finished second to Ferny Hollow in his maiden hurdle at Gowran Park where he battled all the way to the last. He improved massively on that on his second start when he landed short odds at Navan, beating Dunboyne by 14 lengths. The runner-up has franked the form since so it has a decent look to it.

Going into the Lawlors Of Naas Grade One, I tried to oppose him but he was extremely professional and the more I look back at that race now he looks even more impressive. Jamie Codd gave him a favourable mention in a Cheltenham Preview and I would always take notice of what Jamie says.

It looks a top-quality renewal of the race but, hopefully, the Irish will get the day off to a flyer. 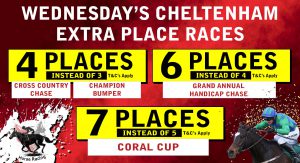 This race looks all about Monkfish and he is very hard to oppose. He has been nothing short of scintillating this season and it will take an amazing performance from one of the others to lower his colours.

In terms of a betting perspective, the market without the favourite is the way to play into this race and the Henry De Bromhead-trained EKLAT DE RIRE looks capable of a bold showing.

He has really impressed me this season in his chase starts and was very good when making all the running at Naas to see off Escaria Ten and Pencilfullofled. He could set off in front and, if he gets into a rhythm, it may only be Monkfish that could have the raw ability to lay a glove on him close home.

He looks the play in the ‘betting without market’, in my view, and has enough ability to go close. 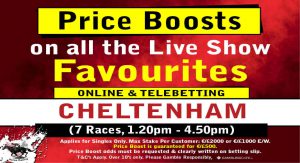 Emmet Mullins has placed his horses really well in recent months and this could be another very canny move with SNEAKY GETAWAY appearing here.

This horse is a dual-purpose performer and the last time we saw him he finished second to Grandmaster Flash at Dundalk Stadium. That was a lovely preparation and he should be spot on for a tilt at a very competitive handicap over obstacles.

He is a classy sort on the level, having finished eightth in an English Cesarewitch in 2019, where Stratum was victorious, and then finished midfield in an Irish Cesarewitch where his stablemate Cape Gentleman was the horse that came home in front.

He has cheekpieces applied here and they might just help his concentration. He normally travels well and the track and trip should be no issue to him.

Looks great each-way value and should be hard to keep out of the frame.

My preview for this race won’t be looking for a way to take on the favourite as I simply think the Willie Mullins-trained CHACUN POUR SOI is far too good for this field and could produce a very good performance on his first attempt around Cheltenham.

He shot on to the scene under Paul Townend at Naas just over two years ago when he absolutely demolished a field by 31 lengths and he hasn’t looked back since.

He went and followed that up by landing a Grade One at the Punchestown Festival later that season and has since landed three more Grade Ones. He is one of those horses, in my view, that come along once in a lifetime. I think he has a massive engine and jumps for fun.

All the question marks are around how he will handle the track and will he get up the hill? I think he will be that far clear going to the last that it won’t be a massive worry.

Looks far too classy for this field and takes all the beating.

SOME NECK was formerly trained by Willie Mullins but is now in the care of John Mc Connell and the booking of Richard Johnson really catches the eye.

This enigmatic grey looks to have really taken to this new discipline and proved that when he got his head in front over course and distance back in December under Ben Harvey.

His prep run for this was very eye-catching when he ran over hurdles at Punchestown, where he led to the second-last before weakening out of contention.

With the ground and track in his favour, and the assistance of the former champion jockey, I think he is a solid each-way player here at double-figure odds.

Joseph O Brien has sent a small but select team of horses to Cheltenham this year and he looks to have one of the main protagonists here in ENTOUCAS.

I can see this horse being well backed close to the off in the colours of JP Mc Manus. In terms of form, he was fourth at Leopardstown last time out behind A Wave Of The Sea and had The Shunter, who has since won the valuable Morebattle Hurdle at Kelso,  just in front of him, and back in fifth was Mitchouka, who has come out and won since.

I honestly believe that race will work out really well with The Shunter well fancied on Thursday at Cheltenham. This horse has a lovely weight of 10-11 and, with luck in running, I can see him being extremely difficult to beat.

He has a bit of class and the ground should be no issue.

This looks an absolutely excellent renewal and SIR GERHARD has been top of my list for this race for quite a while.

He demolished a field in Down Royal om his debut under rules for Gordon Elliott and Jamie Codd and he looked special. I was even more impressed with him at Navan as he travelled so strongly through the race and stayed on well.

Speed and stamina are two of the main attributes needed in a Champion Bumper but I think this horse simply has it all. He ehas since been transferred to the stable of Willie Mullins and will have Champion Hurdle-winning rider, Raechel Blackmore aboard.

In my view he takes all the beating.