Alan Marron is back to preview Day One of the Cheltenham Festival.

Folks, we have finally arrived at the pinnacle of the jump racing calendar. No spectators makes for different viewing this year but, as normal, we will hopefully get a winner or two.

Unfortunately, due to Covid 19 restrictions our retail estate remains closed, but if you would like to check out the specials and offers available this week, contact our Telebetting team or check them out on our website.

The field size is somewhat depleted this year but it is packed full of quality and is sure to be an excellent renewal.

BALLYADAM is a horse that I have followed this season with a very keen interest. He was touted as a very good horse until he got turned over at short odds in a bumper but, since that, his progression over hurdles has been excellent. He won his maiden hurdle in Down Royal back in October with ease and then went on to landed his Grade One when he was impressive in the Bar One Racing Royal Bond Novice Hurdle.

Gordon Elliott’s horses weren’t quite firing over Christmas and this horse ran below par. It was much more like it at the Dublin Racing Festival where he loomed up on the outside of Appreciate It as they turned in, but on ground he wouldn’t have liked he got done for stamina.

I just think the small field and the ground being better swings more attention the way of Ballyadam. I can see For Pleasure making it a truly run race and it turning into somewhat of a speed test from the back of the second-last.

I think Ballyadam has a good turn of foot and stays well. He will be very hard to beat.

While this race was billed to be one of the races of the week, the unfortunate defection of Energumene looks to have left it open for Shishkin to prove that he is the best in the division at the moment.

In terms of a betting perspective, I wouldn’t have a massive opinion on the race. I would however be looking at a small play in the betting without market and CAPTAIN GUINNESS might be the one to chase Shishkin home.

This horse came into the Supreme last season with a big reputation and was going nicely when Asterion Forlonge had wayward tendencies and caused a ripple effect ultimately leading to Captain Guinness being brought down. In terms of this race, Allmankind will set off at a proper gallop, which I think may be his undoing as his jumping leaves plenty to be desired.

Shishkin will likely travel away and then it will be a case of seeing what can go with him.

Captain Guinness has a bit of class and, in the betting without market, he might worth a small play.

Check out these offers we have available on today’s card at Cheltenham – PLUS the PRICE BOOSTS that apply ALL WEEK!… 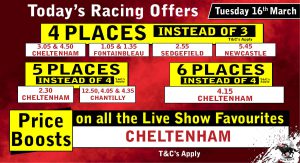 Jessica Harrington and Robbie Power team up here with DISCORDANTLY and this is a horse that I have followed on his last two runs and his jumping has cost him.

He ran very well in a competitive handicap at Christmas around Leopardstown before being well fancied for the Thyestes in Gowran Park. He didn’t get any further than the second fence on that occasion.

He went to Punchestown for the Irish Grand National Trial and his jumping was much better and he was in contention when he again let the fences get in his way and fell five out.

There is no doubt he will have had plenty of schooling to be heading to Cheltenham and, while his jumping may be suspect, I am still of the opinion there is a decent pot in this horse over larger obstacles.

He was eighth in the Martin Pipe in 2019 so he has a little bit of course form.

He would be a small each-way play in a tricky race.

This race on paper looks to be all about the two mares, Honeysuckle, who is unbeaten, and the reigning Champion Hurdler in EPATANTE.

I think it will be a bigger task for any of the others to be able to give weight to these mares and win. While Honeysuckle deserves plenty of respect, I just think Epatante, if she can come back to her best, will just have a little too much on the day.

She was brilliant in last year’s race and, while many have knocked the form, it was still a Grade One win around Cheltenham and that takes plenty of doing.

She was electric in the Fighting Fifth Hurdle at Newcastle and then ran poorly at Kempton over Christmas. It has since been reported that she had a back issue and, while that would be a cause for concern, there is no better man than Nicky Henderson to get her ready for the big day.

The pace side of things could set the race up lovely for her as Goshen, Aspire Tower and Honeysuckle all like to go forward so Aidan Coleman should be able to sit in and let her get settled.

I think on better ground Honeysuckle might be a little bit suspect. Epatante will track her to the last and hopefully it will be plain sailing after that.

I think she is an excellent mare that will take all the beating.

Willie Mullins knows what it takes to land this race and, while much of the attention may be centred around Concertista, I think one of her stablemates might be a bigger danger.

MY SISTER SARAH is a mare that was running a very good race in the Martin Pipe last season when she got brought down at the last. We will never know how close she would have been but she was staying on well.

She has some good lines of form over hurdles, has had Flooring Porter and The Storyteller behind her in races this season and they are both leading fancies for the Stayers’ Hurdle.

She was very impressive at Limerick in October and looked to need the run when she finished down the field behind Concertista last time out. She has had a wind op since that and, on better ground, I think she looks overpriced.

She would be a small each-way play for me, but don’t be surprised if she is doing all her best work at the finish.

One of the most competitive handicaps of the week and the one that I am most interested in is the Paul Nicholls-trained HELL RED.

Something looked amiss that day but he has since been in and out of form, but he has had a wind op and I think he will be much better suited by the drier ground.

He was beaten at odds on at Wincanton last time behind Pol Crocan and, while that form doesn’t look overly strong, I think Hell Red could bounce back to form here.

I’ve seen plenty of big prices floating around so small each-way play and hopefully he will get some luck in running under Bryony Frost.

This race is all about stamina and the Willie Mullins trained LORD ROYAL is a very interesting runner here. While he is inexperienced over fences I think that he has plenty of ability and could benefit from a stamina test.

I was really impressed with his jumping at Thurles on his chasing debut until he made a bad mistake and fell two out. He was then very cautious next time before running a much better race when finishing second to Mr Hendricks at Navan.

If Paul Townend can get him into a nice rhythm early on, he could be the one staying on strongly to end day one on a high for us.