Alan Marron is back to preview Day 4 of the Cheltenham Festival.

Folks, we are back with the fourth and final day of the Cheltenham Festival 2021. We landed a couple of winners on Thursday with Allaho and The Shunter. We nabbed a big price place with Asterion Forlonge also.

Our shops remain closed due to Covid 19 restrictions but remember folks you can still avail of all the specials and offers by contacting our Telebetting team or by checking out our website.

ZANAHIYR has been the absolute standout in this division all season and I can’t see how any of the opposition will be able to trouble him.

He is unbeaten in three starts over hurdles, winning at Ballinrobe, Fairyhouse and Leopardstown.

His penultimate victory at Fairyhouse absolutely blew me away. His turn of foot was electric and he left Saint Sam for dead approaching the last. Saint Sam has gone and franked that form by finishing second in the Boodles/Fred Winter this week at Cheltenham.

This horse was bred by the Aga Khan and formerly trained by Michael Halford. His progression this season has been steady but if he improves off his Leopardstown victory then he will take a world of beating.

Will be very hard to beat. 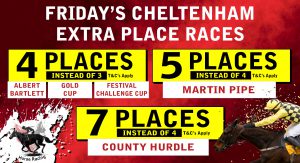 I have spent quite a bit of time looking at the trends and stats for this race and the horse that fits most of them is the Denise Foster-trained SAINT D’OROUX.

This horse is owned by Simon Munir and Isaac Souede and will be ridden by Daryl Jacob. He was third in the Boodles/FredWinter last season behind Aramax so his course form is the first positive with eight of the last twelve winners having run at Cheltenham before.

His age and weight are next in the equation: he is a five-year-old carrying 10-9 and nine out of the last 12 winners have either been aged five or six and have carried 11-1 or less. He has been raised three pounds to a mark of 135 having finished third behind Drop The Anchor on his last run and that form has a decent look to it.

He will surely land one of these decent handicap pots soon and hopefully it is this time around. 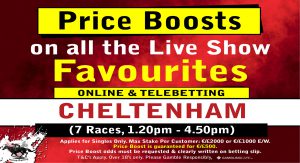 Both Sir Gerhard and Flooring Porter have demonstrated that with the advantage of an easy lead you can stay in front an land a decent prize.

STATTLER looks primed to be ridden close to the pace after he tried to make all last time at Leopardstown where he finished third to Gaillard De Mesnil.

He really impressed me in his maiden hurdle when he gave Glens Of Antrim seven pounds and still beat her by three lengths staying on strongly. She finished sixth in the Mares’ Novice Hurdle on Thursday, not fully staying up the hill.

I think Stattler is still learning and could be a better chaser for next season. If Paul Townend can set steady fractions up front it could take a good one to get past him.

He will be hard to keep out of the frame here in my view.

I simply can’t see past AL BOUM PHOTO who is attempting to enter the record books and make it three Gold Cup victories in a row.

This horse had his usual preparation, which was a run in Tramore, and this season he was absolutely brilliant when he got the better of Acapella Bourgeois by an ever-widening 19 lengths.

There are plenty of question marks about the opposition and whether they will see out the trip or whether visors or cheekpieces may help them.

Al Boum Photo is rock solid and has been there before and knows what it takes to land the showpiece on the week.

I think he will take the world of beating and he looks very hard to oppose.

I am going for a former winner of this race who is now a teenager but impressed me last time out with a battling victory.

HAZEL HILL will be ridden by Alex Edwards who was on board when they got the better of Shantou Flyer in this race back in 2019. He knows the horse well and that looks a positive move.

In terms of his form. I have watched back his victory from Ludlow last time, where it was slightly error prone all the way, but he still showed some grit and tenacity to battle away and get up and win going away.

He was giving weight away to the opposition on that occasion so that victory can be upgraded.

While he won’t have any improvement at age 13, I think he could stay on into a place and give us a decent run for our money.

A very unoriginal selection here but ELIMAY looks the most likely winner and, with her form being franked by Allaho landing the Ryanair on Thursday, she looks too good to take on.

She gave Shattered Love five pounds over two miles last time and travelled so strongly and beat her very easily. This longer trip will suit even better and we could see this galloping grey scoot off into the distance.

She ran an excellent race when second to Allaho in Thurles and, as I have already mentioned, that form looks extremely strong. She is a short price and, in betting terms, she looks ideal for many multiples on the day.

Takes the world of beating here for me.

It could be a quick double for owner JP Mc Manus as GENTLEMAN DE MEE looks very unexposed for this type of race.

Like many of Willie Mullins French recruits, this horse took a keen hold on debut at Naas but was very impressive when seeing off Don Diablo.

I was keeping a close eye to see would connections be tempted by running in the Supreme Novices’ Hurdle, but they have gone down the handicap route.

Both Grand De Thaix and Magrudy, who beat him in France, have gone and won since so the form has a solid look to it.

He is very unexposed and, if he has improved off the back of his last run, then he could take plenty of beating.