Posted By: Will Reilly 6th February 2021 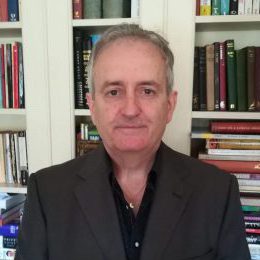 The match is live on Sky Sports Premier League

Just when you thought that the wheels were back on the wagon, they fall off again

Liverpool’s 1-0 home defeat to Brighton on Wednesday means that they have now lost three of their last six league games, two of which were home games.

To add to their woes, they have failed to score in five of those seven games and have not scored in three-successive home league games – the first time that has happened since October 1984.

Back-to-back 3-1 wins ahead of the Brighton match seemed to have steadied things. Not so, it would now appear.

Meanwhile, Man City march on at the top of the table and, following their 2-0 win at Burnley on Wednesday, have won their last nine league matches, in the process keeping eight clean sheets. If they keep another one on Sunday they will set a club record of seven-successive clean sheets in the league.

Leading the way in terms of goals during this purple patch are İlkay Gündoğan (6, and he has scored seven in his last eleven starts) and Raheem Sterling (4), but ten different players have contributed at least one goal in their nine-game winning run.

The full list of options is here >> Bet Buffet

Here are some of the options… 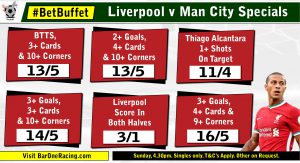 He has also scored two goals in the last three league meetings at Anfield between Liverpool and Man City (as has Sadio Mané, who missed Wednesday’s game but should be okay for Sunday).

The up-and-down nature of Liverpool’s form is puzzling. Yes, injuries and a lack of fit central defenders are playing their part, but that does not explain their inability to score on a regular basis.

I must admit that I was expecting them to beat Brighton and, therefore, be heading into Sunday’s game on the back of three-successive league wins.

As such, I would have fancied them to beat Man City at home – and the stats on the match could only have supported this view.

That’s an impressive record for the Reds, one that may not be easy to sustain on Sunday.

Liverpool v Man City is a DOUBLE THE ODDS on FIRST GOALSCORER BETS match with us!

(I.e. If the first goalscorer scores again in the match, we will Double The Odds on him as first scorer in the game)

A further concern for Liverpool is that goalkeeper Alisson could miss the match through an unspecified illness, although it is not Covid-19. He would be a big loss if unable to play on Sunday – as would Mané and Fabinho. However, all three have a chance of playing. There will be more news on Saturday.

Man City have no new injury concerns. We already knew that the tri0 of Sergio Agüero, Kevin de Bruyne and Nathan Ake would miss the match.

Will Liverpool rediscover their touch and prevent a confident City side from moving ten points ahead of them in the table? City also have a game in hand over their north-west rivals.

It’s yet another question that adds to the compelling nature of the weekend’s eye-catching fixture, Liverpool v Man City on Sunday Feb 7th at 4:30pm.