Alan Marron is back to preview Sundays card on Day Two of the Dublin Racing Festival.

What a day of racing we had yesterday folks, Chacun Pour Soi, Energumene and Honeysuckle all electric in victory showing that the Irish will be a force to be reckoned with at Prestbury Park next month.

We had a couple of winners on the preview with Chacun Pour Soi and Energumene but we will hopefully do much better today.

As ye are all aware by now our shops remained closed due to Covid 19 restrictions but you can still avail of all the specials and offers on a fantastic day of racing by checking out our website or contacting our telebetting team.

We start the second day of the Dublin Racing Festival with a very competitive handicap. One piece of form stands out for me and, while she will certainly have to improve, she could be a solid each-way price.

RAZZLE DAZZLE LOVE, trained by Tom Gibney, was very impressive when beating Hammundarson and Pure Genius by a massive 23 lengths at Punchestown when she relished conditions and galloped her rivals into submission.

That form got a massive boost when Pure Genius, who runs later on the card, won by 52 lengths on his next start. Razzle Dazzle Love ran a decent race when third to Royal Kahala on her next start and this will be her first attempt in handicap company.

She looks a decent price and could be a solid each-way play in this race.

This is an excellent renewal of this race, and while Quilixios is a deserving market leader, I think he could have it all to do to beat YOUMDOR.

Willie Mullins and Paul Townend were in superb form on day one yesterday and, as long as the final-flight fall last time doesn’t have any effect on this horse, then he must go close.

He looked very impressive when winning by 16 lengths at Gowran Park and then was coming to challenge at Fairyhouse when clipping the top bar and coming down, leaving Teahupoo to go well clear and claim victory. The question on many people’s minds that day is,  was Youmdor travelling the best?

While there is a slight question mark over the 99-day absence for Quilixios, there is no doubt that Youmdor will have been well schooled since that fall and will be ready to go.

He should take all the beating here.

Here are the RACING OFFERS available with BAR ONE RACING today, including PRICE BOOSTS at LEOPARDSTOWN… 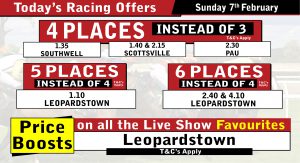 While Appreciate It looks electric over hurdles, and this could be a massive stepping stone towards Cheltenham in March, I will be happy to take him on here.

BLUE LORD, who is stablemate of the market leader, was my selection on a recent preview for Bar One Racing when he ran in the Lawlors Of Naas behind the very smart Bob Olinger.

He jumped well on that occasion but was far too keen in the hands of Paul Townend and, when it came to making a challenge near the finish, he had nothing left to give. That was over 2m 4f and the drop back in trip here can only be a positive.

He may be allowed to bowl along in front here, and if Bryan Cooper can get him to settle we could see a massive performance.

Willie Mullins will be looking to follow up his win in this race last year with Asterion Forlonge and I would think he will likely do so, but Blue Lord looks a major contender.

If Razzle Dazzle Love happens to run well in the first race on the card then we should get a good line into the chances of PURE GENIUS here for Ted Walsh.

This horse will be contesting his first handicap hurdle and will have Simon Torrens claiming five pounds off his back. Simon was victorious twice on yesterday’s card, including when wearing the famous green and gold of JP McManus aboard Drop The Anchor for Pat Fahy.

Pure Genius could be a very smart stayer in the making considering he absolutely bolted up last time when he won by a massive 52 lengths. A handicap mark of 127 may really underestimate the ability this horse has and he could be one to keep a close eye on with Cheltenham in mind.

He travels really well in his races and I think he may just sit off the pace here and use his stamina.

While Monkfish is likely to take plenty of beating, I think ASTERION FORLONGE looks very interesting on the basis that he won on this card last season and that Willie Mullins will have had him schooling much more in recent times considering he has come to grief in his last two chase starts.

He impressed me on chase debut at Punchestown and, if he could get back to something like that form, he would be a major contender here.

His victory in the Chanelle Pharma Novice Hurdle last season was very impressive so the ability is there but he seems quite quirky. He went to Cheltenham for the Supreme Novices’ Hurdle and constantly jumped right and did well to finish fourth to Shiskin.

It is interesting that Patrick Mullins will take the ride this time around suggesting that he has done plenty of work with him recently.

It wouldn’t surprise me if he ran a massive race and looks a decent each-way play.

The feature on the day looks a fantastic renewal and the one that I am very keen on is MELON.

This horse finds it difficult to get his head in front but has run some fantastic races in defeat including when third in the Savills Chase at Christmas.

His last two appearances at the Cheltenham Festival have seen him finish second on both occasions, firstly in a Champion Hurdle and then in a Marsh Novice Chase, which was a titanic battle between himself and Samcro and he just got bobbed out of it on the line.

In the Savills Chase at Christmas, he was in front very far out and I think Paul Townend may hold onto him a little longer here. His jumping was very good last time and, when headed, he never shirked the issue and battled back all the way to the line.

Willie Mullins and his team were always of the opinion he would get three miles and I think he looks the one to beat here.

FARCLAS is a very interesting runner here based on the fact he was very well-fancied for the Thyestes in Gowran Park but didn’t run. The race was eventually won by his stablemate Coko Beach for the same owners in Gigginstown House Stud.

This horse was much too keen in a very competitive handicap at Christmas and I think the drop back in trip is sure to suit. Jack Kennedy may ride him close to the pace and he looks a major contender off a two-pound higher mark.

He has plenty of class and is a former Triumph Hurdle winner so he will be coming into form at this time of year.

I think he gets into this race on a lenient enough mark and should take plenty of beating with luck in running.

The final race of the Dublin Racing Festival is a very good mares’ bumper and Willie Mullins looks to have a strong hand with the top two in the market.

BRANDY LOVE was visually very impressive on debut and could book her ticket to Cheltenham with victory here.

She beat Presentingnewyork by seven lengths but she did it very easily and looks another very smart mare to take up residence at Closutton. She will likely improve off the back of that and. if she does. the others will have to be very smart to get anywhere close to her.

Should take the world of beating here.