Alan Marron is back to preview another Friday card at Dundalk Stadium.

The followers of my previews were in clover on Monday last when we landed three winners. Masalai (4/1) and Gatsby Cap (4/1) being the standouts with Shackleton Hero a short price.

Another excellent card on Friday to get a winner or two on the board ahead of a fantastic weekend of racing at Leopardstown which full card previews will be available for.

Our retail estate remains closed folks but keep an eye out for all the specials and offers on our website or avail of them by contacting our Telebetting team who will be more than happy to help. Stay safe.

BarOneRacing.com prices for Dundalk on Friday can be found here

A very interesting runner in this race is the Michael Halford trained filly HODD’S GIRL. She is seriously on the improve and gets plenty of weight here and should take plenty of beating.

Watching her race back from last time she travelled very well through the race and waited on a gap to appear and quickened away to beat a good yardstick in Pillar by a length.

She is 20lb higher than her opening mark but Adam Farragher will keep the partnership in tact and claim seven off her back.

She could be a filly to keep on the right side of for the rest of the season. The one to beat here.

Bar One Racing will be be BOOSTING THE PRICE of the FAVOURITE on the LIVE SHOWS in EVERY RACE at DUNDALK today!! 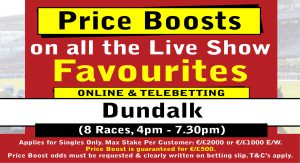 Bar One Racing have these EXTRA-PLACE races available too!! 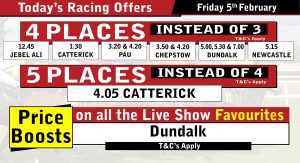 BLUEBEARD’S CASTLE returns to the mile and a half trip off a two pound higher mark than what he was successful off last time when just holding on to get the better of Tartlette.

He will likely make the running here and if the fractions can be right up front he could be the one to beat. On the 23rd November he broke his maiden tag and had Tooreen Angel in behind him. She franked that form on Monday last when just getting the better of Melliferous in a driving finish.

I think there is plenty more to come from Bluebeards Castle and he looks tough to beat here.

Much of the form in this race ties in with a number of the runners but the one that interests me most is GETAWAY QUEEN who will be ridden by Conor Hoban.

This mare finished fifth behind Storm Elza last time out but should get much closer here with a pull in the weights in her favour. The form received a boost on Monday when Pineapple Express who was second, finished second again just getting caught close home.

Getaway Queen is only two pound higher than her last win so she looks a solid each way proposition in this race at what should be a decent price. She has one nice piece of form back on the 25th September when she had Storm Steps in behind here. He went on to win two after that and finish third twice and is now rated 76 on the all weather.

She is rated 62 here and must go close.

If Getaway Queen runs well in the 5.00 then it will enhance the form of our next selection. Back on the third of December 2019 Getaway Queen won the race and had the selection for this race back in second.

MONSIEUR PIQUER was a real eyecatcher on his last run over 1m 4f in a race where the enigmatic Macaban City got his head in front.

I have watched the race back on a number of occasions and if you stop the race at the two furlong pole than Monsieur Piquer has kicked for home and looks the likely winner. The petrol gauge goes to empty and he starts to wander suggesting that he didn’t stay the trip. He travelled really well just off the pace last time out and could do similar here.

Lady Of Luxury who finished fifth in that race has come out and won since and Flindt who finished eight has won over hurdles at Fairyhouse. The drop back in trip is sure to suit and he could be overpriced.

The handicapper has dropped him two pound and he should be tough to keep out of the frame here.

This race doesn’t look like it will take much winning but the John Mc Connell trained DREAM ROUND looks the standout and should be very hard to beat.

She gave Illusory plenty to think about for most of the straight before her stamina gave way and she faded into third. Melliferous who finished fourth on that occasion has franked the form since with a fast finishing second as previously mentioned earlier.

This filly drops back to a mile and has some solid form over the distance when trained by Andrew Balding. She has finished second at Southwell and third at Kempton and they were very solid runs.

This race looks a real drop in grade for her and I would be very disappointed if she is beaten here.

This for me is the race I am most looking forward to on Friday night as STAR HARBOUR finally gets stepped up in trip for the team of Adrian Mc Guinness and Gavin Ryan.

This son of Sea The Stars should relish the trip even though he is quite speedily bred out of Siodiul. He was well backed on his debut but had plenty to learn when finishing fifth to The Highway Rat.

He then ran well on his next start which was over seven furlongs when he finished fourth behind Visualisation and Devils Outlaw. Devils Outlaw will likely be near the head of the market here.

Star Harbour is drawn in stall thirteen and many will say that is a negative. I think he will be better to slot in and it should see him finish his race better.

One of the better bets on the night for me and will be my NAP selection.

This is a case of last chance saloon for the selection in this race as he is so well handicapped but is just failing to put it all together.

KATIYMANN has appeared in my previews on more than one occasion and I am happy to put him up again. I am going to cross out his last run and judge him on what he has done prior to that. Something looked amiss last time and he faded very quickly.

He is rated 69 here and Adam Farragher will take seven pounds off his back. He has been placed off 88 in the past around here and if he can put his best foot forward then he would be a solid each way shout.

He is drawn in stall one on this occasion so Adam should be able to slot him in and hopefully get him to see the race out better.

He will be extremely hard to keep out of the frame if he runs a true race.

This looks a cracking race on paper and looks all about SPEAK IN COLOURS for Joseph O’Brien.

This horse has some really solid form in the book having won the Greenlands Stakes and the Ballychorus Stakes last season at the Curragh and Fairyhouse respectively. They were both Group contests and his sights are much lower here to get his season off to a winning start.

The last time we seen him was on Champions Day at Ascot when he finished down the field in the Group One Sprint. He is rated 111 and his main market rival Harry’s Bar is rated 106. Speak In Colours has to give him 4lb so he is effectively a pound well in at the weights.

It could well be a prep run for bigger things in Meydan for this horse but if he brings his A game to the table then he should take all the beating.

I think the market will tell us plenty in this race.