Alan Marron is back to preview another excellent Friday night fixture at Dundalk Stadium.

Unusually, I didn’t get a winner on the board last Friday night but managed a couple of placed efforts. Hopefully we can get one or two into the winner’s enclosure today. Both maidens look to hold chances of us getting our heads in front.

As ye are all aware, folks, our retail estate remains closed due to Covid 19 restrictions. Check out our website or contact our Telebetting team to avail of any specials or offers ahead of an excellent weekend of racing.

Check out today’s key RACING OFFERS (scroll down page), which include PRICE BOOSTS at DUNDALK plus EXTRA-PLACE races

STRIP LIGHT looks to be one of the main protagonists here following a very good run last time out when finishing second to Lady Of Luxury. Strip Light looked the winner inside the final furlong but then Alan Persse got a lovely tune out of Lady Of Luxury to win going away.

The handicapper put Strip Light up two pounds for that run, but with Cian Mc Redmond claiming four off his back he looks nicely weighted here. He did well to finish as close as he did to Lady Of Luxury considering he was conceding plenty of weight to her.

I thought it was a very solid run and if he can back that up he will be hard to keep out of the frame here. 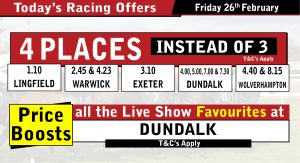 This is a very strong race for the grade but it’s hard to see past TOWER OF PISA who is dropping back in trip having failed to stay a mile and a half last time out.

This filly will receive a stone from Tartlette,who was impressive last time but I think this will lean the race in favour of Tower Of Pisa.

She really impressed me when landing her maiden over today’s course and distance when she absolutely bolted up by six-and-a-half lengths from Palace Rock. That form was franked when Palace Rock followed up next time out.

She was fourth behind The Mouse Doctor last time, and while she may have to improve I think there is plenty more to come.

She takes plenty of beating here.

Alan Marron feels that Joseph O’Brien will get another winner on the board at the Co.Louth venue

Many of the runners here have form that ties in with each other but the one that interests me the most is DARK MAGIC trained by Tom Cleary and who will be ridden by his son Rory.

There may not be much more improvement to come from this horse but he is extremely consistent and will be very hard to keep out of the frame.

He finished ahead of Kudbegood and Well Suited back on the 20th of January. That form has been well boosted as Well Suited has gone on to win twice since and will reoppose here.

Just looking at the weights, Dark Magic received three pounds from Well Suited when he finished ahead of him and this time around he will receive five pounds. I would think the handicapper knows where he is with Well Suited and that will leave Dark Magic on a lovely mark here.

He looks an each-way bet to nothing here from a good draw and should be definitely on the premises in the closing stages.

The one standout here – and he’s likely to head the market – is the Johnny Murtagh-trained SKILLED WARRIOR.

This colt made his debut in Gowran Park when he finished third behind Southern Cape and his stablemate Fourhometwo.

That was a decent run in the circumstances as Southern Cape was a very short price and would have taken plenty of beating on the day. Skilled Warrior ran a race full of promise as he was slowly away and was learning all the way through the race. The winner of that race went on to contest the Group 2 Beresford Stakes while the second ran in the Listed Star Appeal Stakes at Dundalk.

On his second start, Skilled Warrior was much more clued in and probably just got done for speed behind Jack Duggan trained by Jim Bolger.

He sets the standard in this race and should take all the beating.

The second division of this maiden is very much like the first. FEELING TIP TOP is a horse that I have followed since his debut and have been slightly disappointed that he hasn’t got his head in front.

The last two times we’ve seen this colt has been on the all weather at Dundalk. Firstly, 2nd to Inca Prince who went on to contest the Group Three Killavullen Stakes, and then, next time out, when he looked a ‘banker’ to me but Feeling Tip Top was sent to the front and just struggled to keep the likes of Hale Bopp and Charmed at bay.

He wasn’t beaten far in the finish and I think they may be slightly more conservative this time around instead of adopting forcing tactics.

It’s not matter of if this colt gets his head in front, it is all about when.

He will take plenty of beating here.

Jessica Harrington could be in Tip Top form after this race.

This race looks one of the trickier assignments on the night considering all the runners in the field will be coming off a break.

The standout form though is shown by GODHEAD who is a new recruit for Shamrock Thoroughbreds and Ado Mc Guinness.

This gelding was picked up for 50,ooo guineas at the Newmarket sales back in August 2020. He is a three-time all-weather winner in the UK, having won twice at Kempton and once at Chelmsford.

The last time we saw him was when he was trained by John Gosden and he finished a very respectable third to Motakhayyel in the Bunbury Cup. That form was even more enhanced by the fact that Motakhayyel had won the Buckingham Palace at Royal Ascot prior to that.

Godhead looks to have been a very shrewd purchase by connections, and if he is ready to go then he looks one of the main contenders here.

Will be very hard to keep of the frame.

We move to the penultimate race of the night and, with plenty of pace in the race, I am going to take a chance that it falls into place for INDIANA GREY.

This mare will need to bring her A-game to the party, firstly from the stalls and then throughout the race, but she has plenty of ability to get into contention here. The likes of Miss Sassyboots likes to get on with it so it should be a strongly-run affair.

This mare has been fourth behind the likes of Masalai and Togoville in recent starts and there is nothing really of that calibre in here. She is still eight- pounds higher than her last winning mark, but if she gets the race run as she needs then it will be hard to keep her out of the frame.

She would be a small each-way play in what looks a competitive contest.

When I had a good look through the form for this race there seemed to be plenty of horses who like to get on with things.

TRUEBA on the other hand could be held up and could be doing all his best work late and fast. This horse is having his first run for Eddie Linehan having been formerly trained by Johnny Murtagh. It is actually still owned by the Johnny Murtagh Racing syndicate.

Jamie Powell will claim ten pounds off the back of this horse and that leaves him very nicely weighted. While much of his turf form was on softer ground, he will likely appreciate further on the all-weather. He could just pick up the pieces in what could be a burn-up at the head of the field, something that could suit the closers.

There are not many in this field, as I’ve mentioned, that like to come from off the pace so we will be hoping Trueba gets luck in running and, if so, that he can go close.