Alan Marron is back to preview another meeting at Dundalk Stadium on Friday evening.

Folks, winners have been hard to come by in recent times, most notably last Friday at Dundalk and then it proved unwise to take on Willie Mullins at Leopardstown. I am hoping some of the selections below are well-enough handicapped to get us back in front.

Our retail estate remains closed due to Covid 19 restrictions but you can avail of all the specials and offers online on our website or by contacting our Telebetting team.

We start the night with a maiden over five furlongs and it looks the easiest assignment that BLUE CABOCHON has faced in recent times.

The Stack team landed this race with American Lady last year and this filly is a very similar type. She is the highest-rated in the race off a mark of 82 and has some very strong form as a two year-old.

On her debut at the Curragh she finished a creditable fourth to Dickiedooda, who went on to win a Listed race at Cork. Blue Cabochon followed that up by finishing 3rd and 4th to Frenetic on two occasions in Listed company.

The last time we saw her, she was fifth behind Queens Carriage and I think she may have needed that run which was her first run since September.

She should improve massively from it and take plenty of beating here.

Check out these RACING OFFERS we have available today, including PRICE BOOSTS & EXTRA-PLACE RACES at DUNDALK… 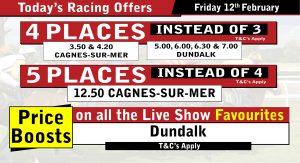 This looks to be a tricky-enough puzzle to try and work out with plenty of form matching-in with certain runners.

MELLIFEROUS will be the selection as she showed enough on her second start, which was over a mile and a quarter, and with cheekpieces applied and the step back up in trip, we should see a decent performance.

She will have Scott Lang in opposition again as she did on debut, but the fact that she has got a second run in may prove decisive. If we watch back her race from last time, it took her a stride too long to get going up the straight which was simply the winning and losing of the race.

Joseph O’Brien has trained the winner of this race twice in the last three years and I think she will go very close.

Tony Martin and Siobhan Rutledge teamed up last week for victory with The Mouse Doctor and they could do similar here with DRAKENSBERG who deserves to get his head back in front.

He was third to Glorious Zoff last time out, which was a driving finish and he was unlucky not to get up out wide. This horse travels really well in his races and loves the surface at Dundalk.

The pace is likely to be strong with the rejuvenated Pak Army in the field, and I think Siobhan will be able to take her time. Siobhan’s claim will leave him three pounds below his last winning mark on the all-weather.

He absolutely bolted up in this race back in 2019 under Wayne Lordan from a much-lower mark. I think he will get the race run to suit and he will be the one finishing late and fast.

This is a very good renewal of this race and SALSTONSTALL, while he will be short in the market, should take all the beating.

He is rated 111, well clear of his rivals, and while it looks to be a stepping stone before he heads to Riyadh in Saudi Arabia later next week, he has race conditions completely in his favour.

Cian Mac Redmond will claim seven off his back and this leaves him receiving weight from all the runners apart from Tartlette.

This horse has won the Colm Quinn BMW Mile at the Galway Festival and also landed the Glencairn Stakes at Naas.

From a betting point of view, he looks a banker for many multiples on the night and that is the way I would play.

This looks to be one of the trickier races on the card and I will side with HARRIET’S FORCE, who has appeared more than once in my previews.

This mare is consistent around Dundak without actually getting her head in front. Keith Clarke, who trains her, thinks plenty of her and it would be nice to see her back in the winner’s enclosure for himself and his team.

She got very close last year when she finished second to Bucky Larson, and in another stride she may have got up. She has contested some decent races and the jockey booking of Shane Foley really catches the eye.

She has been placed off slightly higher marks than this before so I wouldn’t be surprised if she ran a very good race. She has got a decent draw in stall two and Shane should be able to track the pace and let her travel.

She might be slightly better over this trip than further but she should stay on well.

She would be a small each-way play in a tricky race at a decent price.

As competitive as this looks, it is a really good chance for MASALAI to complete a quick double at the County Louth venue.

This horse was entitled to win last time and got a three-pound rise in the weights. I think Conor Hoban won a little cosily on him from a closing Ranger Bob. Dylan Browne Mc Monagle will be on board this time and I would be very disappointed if he couldn’t go close again.

The stable won this race last year with Major Power so there is no doubt it will be on their radar to land it again.

This looks an even more-winnable race than last time so he should take the world of beating here.

If Masalai happens to get his head in front in the first division of this handicap then it will point us in the direction of RANGER BOB, who was a fast-finishing second behind him last-time out.

Sam Ewing will claim two pounds off his back and that could make all the difference to finally getting his head in front. He has run some very decent races in defeat in recent weeks and will win sooner rather than later.

I watched his race back from last time and it took Colin Keane quite a while to get him going and hit full stride. He will need a strong pace and should get it. He is drawn in stall seven so Sam will have a choice when he comes into the home straight. I will be watching for him finishing late and fast.

With more improvement to come I think he looks extremely difficult to keep out of the frame.

This could turn out to be the race of the night with BENAVENTE and Devil’s Outlaw in opposition once more.

Devils Outlaw finished ahead of him on the last occasion they met but I think the fact that Devil’s Outlaw has been beaten again since could see a reversal in the form.

Benavente hadn’t been seen since his debut in June where he finished behind the likes of Lucky Vega and Lippizaner. I think there is plenty of improvement to come from this horse and Shane Foley stays on board.

He looked to me as he may just have needed the run the last day. He just wasn’t able to go with the battling leaders in the final 150 yards and I think we will see a much better performance this time around.

I think he has some very strong form from his debut and should take plenty of beating and end the card on a winner for us.