Alan Marron is switching codes to National Hunt to preview an excellent card at Gowran Park on Thursday.

Folks, we are off the all weather and back to the National Hunt scene at Gowran Park where the features include the Galmoy Hurdle and The Thyestes Chase. Hopefully we can get a winner or two on the board.

Our retail estate remains closed under government level five restrictions but to avail of any specials or offers that we have don’t be afraid to check them out on our website or by contacting our telebetting team.

We start Thyestes day with a competitive handicap hurdle and one of the most interesting runners in the race is the Tony Martin-trained DJASEK who caught the eye finishing second last-time out.

He was given plenty to do and absolutely flew home to snatch second in the dying strides when ridden by Liz Lalor. This time around he will have Peter Carberry in the saddle and he should be hard to keep out of the frame.

Gowran Park has a long home straight so it can be quite a slog in heavy ground. The handicapper has increased his mark by two pounds and he should still be competitive this time around.

With luck in running he should go very close.

JOHNGUS drops back in trip here for Sean and Sheila Ahern and I expect him to go very close on ground that should be no issue.

He has finished fourth on his last two runs at Cork and Fairyhouse, respectively, and I wouldn’t be surprised if he set the fractions up front here and tried to make all the running.

Even though he was well beaten on his penultimate start at Fairyhouse, he had Takarengo in front of him and he was placed in the Cesarewitch at Newmarket on the flat.

I just think I would be keeping a close eye on the market, he has kept decent company and the drop in grade and trip here should see him get his head in front.

The first of the two features on the day and, while the weights seem to suit Great White Shark, I would be happy to take her on at the forecast prices at the minute.

SAMS PROFILE, trained by Mouse Morris, is a very interesting runner here as he reverts back to hurdles for the first time since finishing second to Reserve Tank at the Punchestown Festival back in May 2019. Prior to that he ran a cracking race to finish fifth at Cheltenham in the Grade One Ballymore Novices’ Hurdle behind City Island.

His chasing career has been a damp squib this season, having fallen on his first attempt and then finishing third to Monkfish last time out when he took a keen hold. I would take the chance that the freshness may be out of him now and we could see a much better performance over the smaller obstacles.

If it was a handicap, he would be getting 7lb from Great White Shark but he actually has to give her 7lb this time around. I just think he might be more match fit and he is quite a tenacious battle hardened individual. He will also race in a first-time hood today.

While most of the attention in this race may be around Princess Vega as she is a foal to the mighty Quevega, I am much more interested in the Charles Byrnes runner at the foot of the weights.

As we are all well aware, Charles has been in the news recently but can have runners pending an appeal. PAIRC NA NGAEL ran a very eye-catching race last time out when he finished second. He was short of room at a vital stage and had to be switched left but came home strongly suggesting that he may have been slightly unlucky.

Simon Torrens, who was on board on that occasion, will be on board this time around too, and while he should be close to the head of the market, I think he will takes the world of beating here.

He is extremely well-bred, being by Yeats out of Solerina, so there should be much more improvement to come over this sort of distance.

A four-pound rise by the handicapper doesn’t look overly severe and he will be my nap on the day.

DISCORDANTLY is a horse I have followed since a beginners’ chase victory at this course back in March 2020 and he looked like he was coming into a bit of form when finishing midfield in a very competitive handicap at the Leopardstown Christmas Festival.

Since his beginners’ chase victory he was impressive when he landed another nice pot at Galway in October beating Chavi Artist, who went on to frank the form and win next time up.

The next time we saw Discordantly was in the ‘Troytown’ at Navan behind The Jam Man. Nothing would have beaten The Jam Man on the day but he ran a nice race. I have watched the race back from Christmas on a couple of occasions and I think he ran much better than his finishing position suggested.

Jessica Harrington has since spoke of how the horse needs heavy ground and has come out of the race well at Christmas and has a nice weight here. Robbie Power will be back aboard and the horse has been subject of some market support in recent days.

I think if he can stay out of trouble he should be one of the main betting propositions in this race. Should go very close. 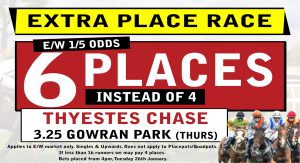 This is a tricky looking contest as a couple of the main protagonists don’t have the greatest record over the larger obstacles.

Antey and Jungle Junction are likely to head the market but the horse that I would be keeping a close eye on is REBEL GOLD trained by Tom Foley.

This horse has finished third on both his beginners’ chase starts to date, most recently behind the very enigmatic Asterion Forlonge. If he can produce something like that then he looks a massive player in this race.

He reverted back to the smaller obstacles last time at Leopardstown over Christmas where he ran an excellent race to finish eighth in a competitive handicap.

That should set him up nicely for this and he could be decent value in this race.

Not much form to go on in the final race on what will have been an excellent day’s racing but a notable jockey booking might be the way to go.

Michael Mulvany has Jamie Codd booked for the mount on his runner here BARNACULLIA and that could be the best way to approach this race.

This horse cost 8k as a foal and will no doubt improve for the run but I would be keeping a close eye on what the market suggests.

He is by Turtle Island and most of his progeny have a liking for softer conditions.

A small each-way play suggested unless the market tells us otherwise.

HERE ARE TODAY’S KEY RACING OFFERS AVAILABLE WITH BARONERACING.COM (AND VIA OUR TELEBETTING SERVICE)… 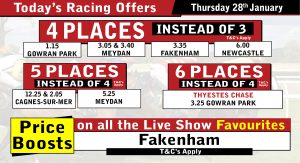