Alan Marron is back to preview another fantastic Friday card at Dundalk Stadium.

Folks, we had an excellent day on the preview yesterday at Gowran Park with Sams Profile (8/1) landing the Galmoy Hurdle and Rebel Gold (4/1) landing the beginners chase on the card.

We are back on the all-weather this afternoon and will hopefully get a winner or two on the board.

Due to Government Level Five Restrictions our shops remain closed but you can still avail of all the specials and offers on what promises to be an excellent weekend of sport. Contact our Telebetting team or check out our website. 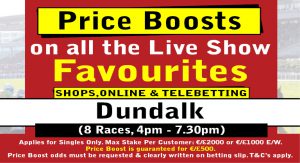 HARRY’S HILL impressed me last time over course and distance with Seamie Heffernan on board and has every chance here to back that performance up.

He tracked the strong pace and stayed on well to get up close home and similar tactics should be employed here. He has gone up 7lb in the handicap but Dylan Browne Mc Monagle will be on board here claiming five.

I think that leaves him very nicely weighted and he should take all the beating here.

Even though he is drawn wide in sixteen, I think TONKINESE looks the one to beat with luck in running.

The last time we saw him he finished third behind stablemate Scholastic in a two-mile handicap, which just tested his stamina a little too far.

It could be a quick double for jockey Dylan Browne Mc Monagle and he gets on very well with this horse, having won the Apprentice Derby on him at the Curragh and also finished fourth on him in a decent handicap here behind Pure Nature.

As the Racing Post comments state: this horse is a likeable rogue and if blinkers work first time then it will take a decent performance from one of the others to beat him. 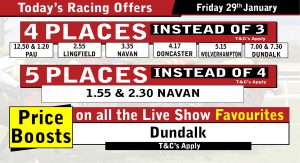 If my race reading is correct, jockey Dylan Browne Mc Monagle could be in line for another winner on the card with the Sheila Lavery-trained SIDESHOW BOB.

We only saw this horse run last Friday when he was fourth behind Emphatic, but I think there is plenty more to be taken from the run than we actually saw from the race itself. He got very upset in the stalls and he was out the back and not really travelling so he did well to finish as close as he did, in my opinion.

The weight pull with Emphatic is now in his favour and I think he looks the standout each-way bet of the night.

He is drawn in stall one and if Dylan can get him settled in a hood then I think he will be very hard to keep out of the frame.

It takes an above-average newcomer to win first time out at Dundalk and THE HIGHWAY RAT achieved that in impressive fashion back on the 11th January getting the better of Cisne and Visualisation.

That form has been boosted on a couple of occasions with Cisne running well on his next start and Visualisation breaking his maiden tag in tidy fashion.

The Highway Rat was professional on debut and if he improves off the back of that then his handicap mark of 79 does not look insurmountable. Andrew Oliver does well with this type of individual and there will be no doubt that he will step up in trip in time.

Should take plenty of beating here.

This doesn’t look the strongest maiden we will ever see at Dundalk but Sarah Lynam has her team in tremendous form and anyone who follows my previews will know that ABEONA has appeared a couple of times before.

This filly has some outstanding form in the book when trained by Ger Lyons and should have more than enough to get her head in front here.

The standout piece of form is when she was a running on second to Pearls Galore on her penultimate run at Cork. Pearls Galore is very well thought of and started favourite for the Listed Cooley Stakes at Dundalk back on the 13th November, having finished second in a Group Three the time before.

While she is drawn wide, I think Abeona might be better to sit off the pace and come through late and fast.

She should have too much for this field.

EGLISH, who is a four-time course winner, looks very interesting here, especially with the booking of Shane Foley.

She has to reverse form with stablemate War Hero from last-time out but she gets a weight pull for a defeat of half-a-length and I think there is every chance she can do that.

She is a filly that seems to have been around for quite a while but she is actually only four years of age and saves her best form for the County Louth venue.

Even though this will be the highest mark she has raced off, she battled away on her last run suggesting that this mark might be within reach.

A small each-way play suggested at a decent price.

Another very tricky handicap but the most interesting one for me  – which could lead to a four-timer for Dylan Browne Mc Monagle – is FARNESE trained by James Mc Auley.

This gelding was a course-and-distance winner back in December and, on his last two runs, he went up to a mile and back down to six furlongs. I think seven will suit him much better this time around and, taking Dylan’s claim off his back, he looks to have a solid each-way chance.

He wasn’t beaten far in his last two runs, but I think from his draw this time around Dylan may be able to go forward and get a handy position and let him travel away.

I think he will be hard to keep out of the frame here.

One of my tracker horses appears here and that is LADY ANDAZ, who really caught the eye last-time out when she finished strongly under Colin Keane to take third place behind Caesar’s Comet and Sunset Nova (who dead-heated).

That was her first run for her new yard following her move from the stable of John Gosden in December. She was bought for 60k guineas at the Newmarket December Sale and this should go some way to paying some of that back.

She is a half-sister to very smart filly Terebellum and, if she is to live up to something like that, she will need to win here carrying top weight.

She is the most unexposed runner in the field and should be hard to beat.