Alan Marron is back to preview another fantastic Friday card at Dundalk Stadium.

Folks, another fun-filled Friday at Dundalk Stadium and we are hoping to get a few winners on the board. It was a struggle on Monday but we look to have a few good chances this evening.

As ye are all aware by now due to government restrictions regarding Covid 19 our retail estate remains closed but don’t worry you can still avail of all the offers and specials either online with us or by contacting our telebetting team.

The draw hasn’t been kind to many in the top half of the market apart from AHYOKA who could improve off the victory she gained last time out in September.

Colin Keane has been booked here and it looks like connections are hopeful of a big run. She is drawn two and should be able to slot in off what looks like a very strong pace and come through late with a winning run.

She is nine pounds higher than that victory but there could be more improvement to come.

Should be hard to keep out of the frame here.

STOP ON RED looks the most interesting runner here even if the drop in trip from seven furlongs to five may be a slight concern.

He will also be five pounds out of the handicap on this occasion but showed plenty of speed when winning here last time out. Seven furlongs may just be about the optimum trip as his stamina was certainly coming to an end.

I think the fact that he has the tactical speed and stays further could be a strong point and could prove very hard to beat here.

The form stacks up nicely and should take all the beating here.

Check out these RACING OFFER available today with BAR ONE RACING, including PRICE BOOSTS on the FAVOURITE on the LIVE SHOWS in EVERY RACE at DUNDALK – and there are also 3 EXTRA-PLACE RACES AT DUNDALK!! 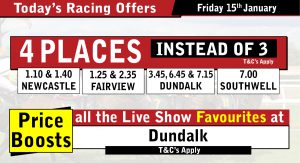 Michael Halford leads a two pronged attack on this race and TIRMIZI is the one that really catches my eye following a very good run over two miles at this venue last time out.

He was third behind Hannon and Scholastic and that form was franked last Friday when Scholastic won very impressively for Joseph O’Brien.

While he is 0-7 on the all weather the fact that Adam Farragher will claim another seven pounds off his back really brings him into the equation here.

He caught the eye in a maiden hurdle prior to his last run and even the time before around Dundalk he ran very well.

Should be hard to keep out of the frame here.

A maiden with plenty of exposed runners and S’ALL GOOD MAN appeals as a horse that could have a little bit more to give on the all weather.

Mosala will likely be the market leader but I wouldn’t be sure as to whether the step up in trip will suit having been worried out of it the last twice.

On the other hand S’All Good Man comes here via some creditable runs in bumpers most notably down the field behind the Noel Meade trained Thedevilscoachman. He has some very good runs on the all weather also considering he finished behind Bluebeards Castle and midfield behind the very impressive Vermilion Cliffs.

I think he could be a bit more battle hardened than many in this field and could take a bit of beating under Chris Hayes who is in flying form in 2021.

Irwin should take all the beating here but I am interested in GO LARGE from an each way perspective who should be a much bigger price but ran with plenty of promise on debut.

He finished fifth to Bear Story trained by Michael Halford in what looked a very decent maiden and he was doing all his best work towards the end of the race when the penny dropped.

He never shirked the issue up the straight and put his head down. I would take that as a promising run with improvement to come.

He could be one to keep a very close eye on in the market or even the betting without.

It wouldn’t surprise me to see him run a solid race here.

CATHERINE CHROI caught my eye last time out and went into my notebook straight away with the comment “unlucky”.

I thought on that occasion there was a little too much use made of her and now with blinkers applied for the first time and the fact she has been dropped two pounds by the handicapper she is certainly on my radar here.

Sam Ewing will be taking another two pound off her back so if he can get her to settle early I think she is the one they all have to beat and looks overpriced in the market.

She has a decent draw in stall six and if Sam can get her to travel away just off the pace I think she could get her head in front this time around following two very consistent third places.

With luck in running she will be very hard to keep out of the frame here.

The first division of this handicap is extremely tricky but looking at markets overnight it is interesting to see money around for SHATHARAAT trained by James Lambe.

I have followed this horse for quite a while as his mark has been in freefall but he has yet to come to life. He is effectively 32lb lower now than when he was placed at Gowran Park back in 2019. I watched his run last time out at Dundalk and even though he was well beaten, he wasn’t beaten that far in the end. They were all well bunched.

He will surely come back to life at some stage so a small each-way play is suggested.

I am taking a real chance here that INDIANA GREY will come out of the starting stalls on terms with the rest of the field and give us a decent run for our money at a double-figure price.

She finished second off a mark of 56 on her penultimate run but last time out she couldn’t land a telling blow after being very slow away and losing all chance.

She is still well handicapped on the back of a 25/1 victory earlier in December and she could go close here. She is drawn in stall two and of she is to get away on terms she could track what looks a decent pace and must go close here with luck in running.

I would suggest an each way play but it wouldn’t at all surprise me if she got her head back in front.