Alan Marron is back to preview another Friday night card at Dundalk Stadium.

Folks, we are back with another excellent card at Dundalk Stadium on Friday evening and we will hopefully get a winner or two on the board after a luckless run on Wednesday. The Paul Nolan-trained Quamino catches the eye as a very interesting runner making his debut in a maiden as a seven year-old.

Catch all the action live in your local Bar One Racing Shop where we will have some excellent specials and offers throughout the day.

Kieran Cotter and Declan McDonogh teamed up with DANDY SPIRIT back on the 27th November and look like having a really good chance of following up here.

He has been raised eleven pounds by the handicapper but he is drawn to attack here from stall one and we could see him make all. Kieran Cotter was questioned by the Stewards regarding the apparent improvement last time out and he said it was the drop down in trip that helped so he stays at five furlongs here.

He is only a three year-old and there should be plenty more to come on the surface.

Should take all the beating here.

QUEENSHIP and Lay It Out renew rivalries here after their run behind Queens Carriage on Friday 13th November,  and with the weights favouring Queenship she looks to be the one to beat.

They ran off level weights last time and this time around Queenship is in receipt of 8lb and she was only beaten three quarters of a length. This will be her second run and many of the stable’s runners improve significantly from first to second run.

It could be a quick double for Declan McDonogh and she will be my NAP on the card in receipt of the weight.

Can Joseph O’Brien get another winner on the board at the Co.Louth venue??

Pat Martin’s horses have been in fine form in recent weeks and his runner here INDIANA GREY could follow up after an impressive victory last time out.

They went very hard up front and the fact that this filly was slow away played to her strengths as she cut them down on the outside close home to win going away. She has been raised 6lbs for that victory and I think there might be more to come on the surface. She has a better draw this time around in stall six so she should be able to track the pace and come through late again. The form was boosted on Wednesday when Tynamite won under a memorable call from commentator Jerry Hannon.

This filly will be very hard to keep out of the frame with luck in running.

Here are the headline racing offers available today with Bar One Racing, which include THREE EXTRA-PLACE RACES at DUNDALK and the fact that we will be BOOSTING THE PRICE OF THE FAVOURITE on the LIVE SHOWS in EVERY RACE at DUNDALK… 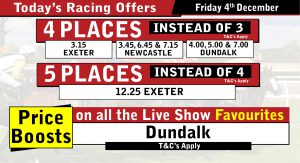 CREATIONIST is a horse that caught my eye a couple of times when trained in the UK by Roger Charlton and looks very interesting here on third run for Ken Condon.

We haven’t seen him since October where he finished midfield behind Marchons Ensemble and that was a decent race for the grade at the time. This horse was a market mover when second in a 70k contest at Kempton back in November 2019, and if he could return to something like that form then he looks a solid each-way proposition here in a very competitive race. He was rated 91 on that occasion and is now only four-pounds higher and runs off a mark of 95.

He wasn’t beaten far behind subsequent Breeders’ Cup Mile winner Order Of Australia here at Dundalk back in September, and even a return to something like that form could see a decent performance.

He would be a small each-way play here at a double-figure price, but I would keep a close eye on the market. 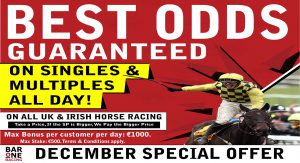 Johnny Murtagh had his team in flying form this season and his runner here SCHERBATSKY looks primed for a very solid run with Ben Coen booked.

Last time out he was third behind a well punted Chateau Musar and Quiet Desire. Quiet Desire has finished third since to frank the form while the horse that finished seventh on that occasion, Crest Of A Wave, was successful here on Wednesday. Scherbatsky kept on very well in the closing stages and just dropped to third close home.

He has been raised three pounds for that run and, while it will demand more to see him successful, there may be a little more improvement to come on the all-weather.

He looks a solid each-way contender and should be hard to keep out of the frame.

The second division of this maiden is a very interesting contest with the Paul Nolan-trained QUAMINO taking his chance. It is not very often you will see a seven year-old contest a maiden but this high-class jumps horse could take all the beating here.

He was successful at the Dublin Racing Festival back in 2019 and he was also successful over hurdles at Roscommon this season when he was well handicapped to win. He has to give likely favourite Tower Of Pisa seven pounds but he is a very smart individual and if he has the speed for a mile and a quarter he will take all the beating.

He is rated 134 over fences and that should be more than enough to see him successful here.

This is something of a shot in the dark but it is very interesting that Tony Martin has booked Declan McDonogh for the ride aboard BELGOPRINCE who is at the foot of the weights.

This horse  was a well-beaten third behind Zanahiyr in a three-year-old maiden hurdle at Ballinrobe. Zanahiyr franked the form massively by winning at the Winter Festival at Fairyhouse sponsored by Bar One Racing. He may have a modicum of ability as he was backed in from 14/1 to 7/1 in a maiden hurdle at Killarney so he must have showing something at home.

A small each-way in a very competitive race but it is a very interesting booking.

HARRIET’S FORCE ran an exceptional race to finish second to Bucky Larson on the 6th of November before being outclassed by the very impressive Ummalnar in the Cooley Stakes.

This should be much more to her liking and trainer Keith Clarke had a winner on Wednesday with New Vocation and could get another on the board here. She is rated four-pounds higher than for her run behind Bucky Larson and she was unlucky just to be caught close home. Luke McAteer claims five pounds off her back and that weight allowance could be vital in a tricky contest. She travels well and could get a nice tow into the race with the likes of Geological in the field.

She should be very hard to keep out of the frame here at a decent price.