Posted By: Will Reilly 9th November 2020 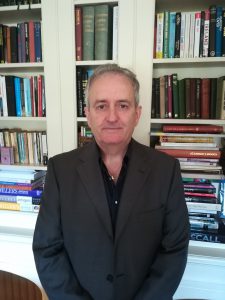 As usual, there are three Grade One races on Sunday’s card, with total prize-money of €505,000 on offer across the seven races.

BarOneRacing.com markets for Sunday’s card at Fairyhouse can be found via this link 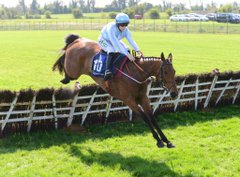 It is a meeting to savour and we are delighted to once again be the fixture’s sponsor.

Our involvement with the ‘Royal Bond’ began in 2006. Two years later, we took over sponsorship of the ‘Drinmore’ and the ‘Hatton’s Grace’.

It has been a happy partnership and the list of winners of the feature races reads like a Who’s Who of jump racing.

The ‘Drinmore’ has been won in recent years by Coney Island and subsequent Cheltenham Gold Cup-winner Don Cossack. When Don Cossack won, Carlingford Lough was second and Road To Riches finished third. Those three horses have won 13 Grade 1 races between them.

The 2018 winner, Delta Work, went on to finish third in the RSA Chase at the Cheltenham Festival before winning three more Grade 1 contests.

Last year’s winner, Fakir d’Oudairies subsequently finished second in the ‘Arkle’ at the Cheltenham Festival and was recently given as a horse to follow this season by his trainer Joseph O’Brien.

The ‘Royal Bond’ has been won by such racing greats as Istabraq, Moscow Flyer, Hardy Eustace, Hurricane Fly, Jezki and Nichols Canyon, each of them a champion in their own right, some of them all-time greats. 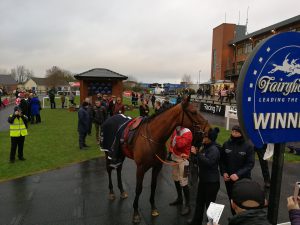 The Cheveley Park Stud-owned, Gordon Elliott-trained Envoi Allen went on to land the ‘Ballymore’ at the Cheltenham Festival and is widely recognised as the most-exciting young horse in training.

Also trained by Gordon, Abacadabras was subsequently beaten a whisker by Nicky Henderson’s exciting Shishkin in the ‘Supreme’ at the Cheltenham Festival while Darver Star finished third in the Champion Hurdle, hurdling’s blue riband event, at the same meeting.

The ‘Hatton’s Grace’ has also been won by a mixture of champions and all-time greats, with the list including Danoli, Dorans Pride, Large Action, Istabraq, Limestone Lad, Solerina, Brave Inca, Hurricane Fly, Jezki, Apple’s Jade and the new queen on the block, last year’s winner Honeysuckle, who has yet to be beaten in  five runs at Fairyhouse.

In 2018, Apple’s Jade joined the short list of three-time winners of a race that is named after the great Vincent O’Brien’s hurdler who won three-successive Cheltenham Festival Champion Hurdles (1949-51). The others are Limestone Lad and Solerina, both of them trained by James Bowe. 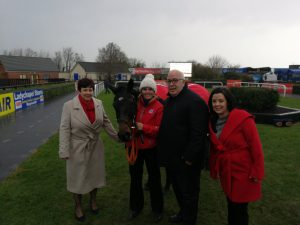 It is a great meeting with a great history, one that seems to grow in depth of quality with each year that passes, something that reflects great credit on the work of Peter Roe and his team at Fairyhouse.

Honeysuckle and Envoi Allen are among the horses that will be returning for this year’s meeting. They are currently two of the biggest names in jump racing.

It promises to be another superb day of racing, one that will be covered by Racing TV and RTE.

Here are some offers available with BarOneRacing.com on Sunday’s card at Fairyhouse… 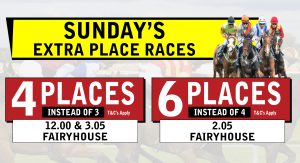 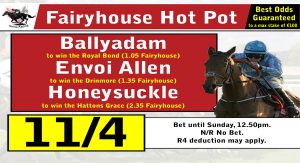