Posted By: Will Reilly 6th November 2020

Liverpool (16 points) are currently top of the table with City (11 points) sitting in tenth although they will move up to third if they win their game in hand.

Everything is set up nicely for Sunday at 4:30pm.

BarOneRacing.com prices on Man City v Liverpool are available via this link

City have only lost one game all season, winning seven and drawing two.

However, their league form has been uneven with three wins, two draws and a 5-2 home defeat to Leicester on Sept 27th.

Prior to winning 3-0 in the Champions League on Tuesday, they had scored no more than one goal in each of their last four matches.

They have, though, won five of their last six matches in all competitions and have kept a clean sheet in each of their last three games.

Their joint-leading scorers in the league this season are Raheem Sterling and Phil Foden with two apiece. Sterling has, though, scored five goals in ten appearances all-told this season.

Much as they haven’t looked so dominant this season, Liverpool are still top of the table, having won five, drawn one and lost one of their seven league games so far.

That defeat, 7-2 at Aston Villa, seems more bizarre the more you think about it.

Liverpool have kept just one clean sheet in the league this season and just two in the ten games they have played domestically.

It’s a different story in the Champions League, with three clean sheets from their three European matches this season.

Leading the way for Liverpool in league goals scored this season is Mo Salah (7) followed by Sadio Mané (4) and Diogo Jota (3).

Jota has now scored six goals in his last four Liverpool appearances, including a midweek hat-trick against Atalanta in the Champions League.

Liverpool have failed to score in just one of their games this season – 0-0 versus Arsenal in the EFL Cup – but hadn’t scored more than two in a game for seven matches until the 5-0 victory in Atalanta.

Overall, they have scored more-than two goals in a game in just four of their 13 matches in all competitions this season.

These are our latest DOUBLE THE ODDS on FIRST GOALSCORER BETS matches, which include MAN CITY V LIVERPOOL…

Manager Pep Guardiola reported on Monday that Gabriel Jesus and Sergio Agüero (hamstring) are closing in on fitness but will miss the Liverpool game. Fernandinho remains sidelined with a “leg injury” and Benjamin Mendy’s muscle injury has also ruled him out.

Virgil van Dijk continues to recover from the ACL injury which could keep him out for the rest of the season. Naby Keita, Joel Matip and Kostas Tsimikas all travelled to Atalanta for Liverpool’s midweek Champions League match so are available again but Thiago Alcantara will miss out.

Fabinho (hamstring) will miss the game, as will Alex Oxlade-Chamberlain.

HEAD TO HEADS – I.e. League meetings between the sides when City were at home

Just two of the last ten have ended as a draw

Over 2.5 goals in the match also looks likely, but is also odds-on

Jota as an Anytime Scorer at 2/1 will catch the eye of many – he has scored in each of Liverpool’s last four games, notching six in total, including a hat-trick in the Champions League on Tuesday and he was only on the pitch for 64 minutes!

City have a very good recent record in this fixture

This week, the Price Boost is Man City to win and Both Teams To Score

Here’s a link to the offer 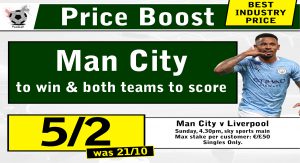