Alan Marron is back to preview an excellent midweek card at Dundalk Stadium.

Folks we are back at Dundalk Stadium on Wednesday with another excellent card and we will hopefully be able to get a winner or two on the board.

This will hopefully build the funds for a bonanza of National Hunt racing at Fairyhouse on Sunday, which is sponsored by Bar One Racing.

Keep a close eye on all the social media channels as some excellent competitions and video pieces make their way online.

As ye all know, the retail estate remains closed under level-five restrictions, which are hopefully will soon come to an end, but ye can still avail of all the specials and offers by contacting our Telebetting team or by checking them out Online at www.baroneracing.com.

TONKINESE looks the class act in this field and he should be extremely hard to beat.

While many will look at the fact that this horse is 0-14 on the all weather and wonder why he is the selection it is mainly on the form. This horse is a former winner of the apprentice derby at the Curragh and showed that he can win over further when successful at Leopardstown earlier in the season. He ran an excellent race to finish fifth behind Pure Nature on his most recent run on the all weather.

I just think his class will get him through this assignment and he could provide new connections with some fun in the early stages of 2021.

This race looks very competitive but back on the all weather I will be hoping for a much better run from THE MOUSE DOCTOR this time around for Tony Martin and Adam Short.

This horse absolutely bolted up under Aine O’Connor at Navan in the Download The Bar One Racing App Ladies Handicap Hurdle. He was given plenty to do on his next run when he reverted back to the level again under Aine O’Connor when he ran on to finish seventh beaten just over 10 lengths.

He returns here off a mark of 71 which is four pound lower than his last winning mark at Dundalk. On that occasion he had Storm Steps in behind and even though it was over a year ago I think the prices may favour The Mouse Doctor.

He will be fit from his recent wins and he looks slightly overpriced to me. Keep a close eye on the market as with any horse from this yard but I think he will be hard to keep out of the frame.

Check out these offers we have available on today’sracing (Wed Nov 25), including PRICE BOOSTS on the LIVE SHOWS in EVERY RACE at DUNDALK! 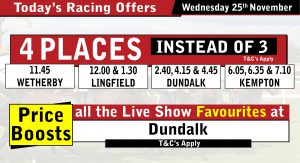 With Sam Ewing claiming seven pounds and the application of cheekpieces ORCHID GARDENS can finally break her maiden tag after some very respectable runs.

She drops back down to a mile for the first time since she was third in the Patton Stakes Listed Race around here last season. The winner that day was a very good yardstick in Crossfirehurricane who went on to win the Group Three Gallinule on his next run.

Orchid Gardens has been campaigned from seven to ten furlongs since that and for me is unlucky not to have got her head in front. This looks to be one of the easier tests she has faced and hopefully the return to the all weather will see her in a better light.

Should take plenty of beating here and will be the NAP on the card.

MUNFALLET normally likes to get on with his races from the front and I was surprised to see him slow away last time out and race towards the rear.

That was his first run after a two month break and he may come on plenty for it. He is better drawn in stall three here and with Annalise Cullen on board claiming ten she might just let him roll away up front.

This horse is a course and distance winner off two pound higher when he made all the running last season and taking Annalise claim into the equation he looks nicely weighted. He may get the run of the race up front and he could set them quite a target.

He is certain to start a double figure price and could give us a decent run.

Pat Martin got a winner on the board with Indiana Grey on Monday and he could get another one here with NEYLAND who will be looking to improve off a very good run last time out.

While she is 0-6 on the all weather she has some very consistent form and will need a strong pace to be able to travel behind the leaders and get there close home. She runs off the same mark as she did last time out and Danny Sheehy will be on board. Normally a wider draw around Dundalk wouldn’t tend to suit but I think this mare might get it run to suit.

She will be hard to keep out of the frame with luck in running.

A reminder of the Dundalk PRICE BOOSTS today… 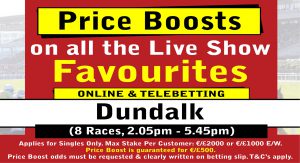 Handicap debutante MAJESTIC MATRIARCH has been the subject of some market support and could be interesting here.

He caught the eye at the Curragh last time out in a maiden behind Menagerie trained by Joseph O Brien and if you watch the race back you will see not much ran on out of the pack. While that was over 1m 1f on heavy ground I think we might see a better performance from this horse on the all weather.

I would keep a close eye on the market overnight cos it may tell us plenty on what is expected of this horse.

BLUE BUNNY impressed me when she ran a cracker to finish third to Messidor trained by Joseph O’Brien on Friday last and if she can improve off the back of that she will surely go well here.

She was 100/1 on that occasion and made most of the running, it’s a long way home at Dundalk and she never shirked the issue one bit. She battled all the way once pressed and only lost second inside the final furlong. She has the pole position in stall one if connections intend to force the pace and she could be better than an initial rating of 79.

Many of the prominent racers have been going well at Dundalk this month and she could be another.

They may struggle to reel her in if she can get into a rhythm up front.

A tough puzzle to solve in the final race on the card but that missing puzzle piece may be the Leanne Breen trained DOUBLE KODIAC with Chris Hayes aboard.

He has dropped a little in the weights since I selected him on his Irish debut and I was intrigued by his run last time out. He was rushed up to lead and then weakened away. His sights have been very much lowered here and we could see a much better performance on his third run for new connections.

He was second to Fox Champion over seven furlongs at Newmarket last season and the winner went on to win the German 2000 Guineas. While Double Kodiac has shown little or no sign of that form in recent starts I will give him another chance dropped back to seven furlongs here.

He could be slightly overpriced. Keep a close eye on the market. The yard had a dead heat winner here on Monday so hopefully their luck is in this time around.