Alan Marron is back to preview Mondays card at Dundalk Stadium.

On a very busy November , we are back with another very decent card at Dundalk Stadium. Romanised who is a dual Group One winner looks the standout performer and should be very tough to beat.

We got a couple of nice winners on the board on Friday last with Queens Carriage breaking her maiden and then Ummalnar producing a very taking performance in the Listed Cooley Stakes for Chris Hayes and William Haggas.

To avail of all the offers and specials that we have check them out on Bar One Racing.com or contact our Telebetting team.

TWILIGHT MAN done all his best work at the finish in a race that has worked out quite well when he made his debut on the 30th October behind Anjalawi.

Queens Carriage who was touched off in second in that race has come out and won since and the fourth Montego Bay ran well in a Curragh maiden next time out.

This horse attracted his share of the overnight market on his debut suggesting that he was doing some nice work and home.

If he can improve off the back of his debut he should be hard to keep out of the frame.

Here are today’s key racing offers from BarOneRacing.com which include EXTRA PLACES and PRICE BOOSTS on the FAVOURITE on the LIVE SHOWS in EVERY RACE at DUNDALK… 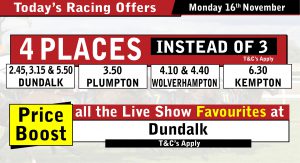 This is a typical competitive handicap but HIT THE SILK could be poised to strike off a declining mark.

I have selected this horse once or twice before and he always seems to catch the eye in behind and then just flattens out.

In terms of a handicap mark he is 12lb lower on the all weather than the turf but is zero from seven on it also. He came back from a month break to race last time out over seven furlongs when ridden by Chris Hayes and they tried to change the tactics up and he again caught the eye. He dwelt and was in rear, got rushed up out wide and was headed under 2f out and weakened out of contention.

Donagh O’Connor is on board this time from a similarly wide draw and I think he could be dropped in and let him travel and hope for some luck.

If he puts it all in he is nicely weighted but it would be a small each way shout from the draw.

TREBLE CONE ran a very solid race last time out behind Leabaland and with Sam Ewing claiming seven here, this horse looks like he is very well handicapped.

Much like Hit The Silk in the previous race his turf mark is higher and from a decent draw I’d expect a very good run. In terms of the form, Punk Poet who finished fourth absolutely bolted up from the front here on Friday night.

Treble Cone was a recent winner at Cork off a mark of 58 and then went to Leopardstown on ground that didn’t suit and finished third. The handicapper has given him a very good chance here by dropping him a pound and I think he will be extremely hard to beat.

He will be my NAP of the day.

3.45 TEST YOUR TIPPING TALENTS AT EVERY DUNDALK MEETING RACE 1M

ROMANISED looks the class act in this field due to being a dual Group One winner on the turf and should be extremely hard to beat here.

On his last two runs he finished down the field in the Prix Jacques Le Marois which was won by Palace Pier and last time out we seen him ultimately finish in the Prix Du Moulin behind Persian King and Pinatubo.

That form is simply head and shoulders above anything else in this field and while he has weight to give away he could be a very short price to get his head back in front here.

In terms of a punting view on this race I would maybe look at the distance market if there is one available, I could see Billy Lee just setting off very close to the pace and getting this horses confidence back, up the home straight, with an easy win. 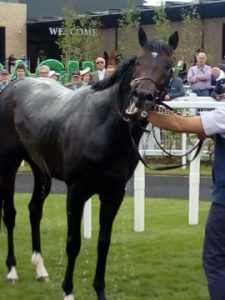 Top-class Romanised is the star of Monday’s racing

This horse was due to make his debut last week and the market was decimated overnight by plenty of money for ISLE OF SARK and there will be no surprise should be dispute favouritism close to the off this time around also.

He was subsequently a non runner so it’s very interesting to see him entered here. This horse was very impressive in a barrier trial around Dundalk on 29th July when he travelled supremely well in behind for Rory Cleary and quickened up smartly to win going away by three lengths.

On that occasion he was trained by Charles O’Brien and he will now line up for Joseph O’Brien in the colours of the Long Wait Two Partnership who have had success in those colours with Numerian.

He was bought from the Keeneland Sales for 100k and then was subsequently withdrawn from the June Craven Sale this year.

If he produces anything similar to the barrier trial and the market support returns then he should take all the beating.

4.50 FIND US ON FACEBOOK @DUNDALKSTADIUM HANDICAP 7F (DIV I)

This mare ran an excellent race last time out when she set the pace and quickened and only got touched off close home. The handicapper has been quiet lenient and given her a good chance by dropping her two pound in the weights and if Shane adopts similar tactics from a good draw in stall five then she could prove hard to catch.

The track has been suiting prominent runners in recent weeks and there is no better man than Shane Foley to set steady fractions from the front.

This mare is 6lb lower than her last winning mark when trained by Anthony Mulholland but she look poised to strike last time with a promising effort and should go close again here.

When ye look at the form for my selection in this race you may think how can I make a case for it but SHATHARAAT has dropped 20lb in the weights in recent months and the booking of Seamie Heffernan catches the eye.

I have followed this horse for quite a well now and while it’s becoming expensive there is definite ability for trainer James Lambe to try and eke out.

This horse was formerly trained by Andy Oliver and he finished third at Gowran Park off a mark of 86 only a year or so ago. He has been totally out of form lately but this will be his first attempt on the all weather and we could see a return to form.

He is likely to be a very big price but I would keep a close eye on the market.

Siobhan Rutledge gave Magi Gal an absolute peach of a ride on Friday night and she teams up here with DAME RAPIDE and this filly is very consistent and could get her head back in front.

This filly is 20lb higher than her opening winning mark here and the step up in trip could bring about a little more improvement. She has raced mainly over 1m 2f and has been staying on strongly in the closing stages suggesting that the step up to 1m 4f wont be an issue.

John Mc Connell has his team in flying form in recent weeks and has a knack of landing the final race on the card.

This filly seems uncomplicated and Siobhan has won on her before. She should be very hard to keep out of the frame here.