Another excellent card at Dundalk Stadium on Friday folks ahead of a cracking weekend of racing culminating at Fairyhouse on Sunday sponsored by Bar One Racing.

Anyone who followed my preview on Wednesday we had two nice winners at 11/8 and 17/2 and Munfallet ran well to finish third at 25/1. Keep an eye on him around Dundalk, he will win very soon.

Black Friday specials and offers are available Online folks so keep an eye out for boosted selections throughout the day.

BarOneRacing.com prices for Dundalk on Friday 27 Nov are available here

Both trainer Kieran Cotter and jockey Cian Mc Redmond have been in decent form in recent weeks and they team up here with POLLY DOUGLAS.

This mare looks nicely weighted with the fact that she was successful at Wolverhampton last season off a mark of 59 and she is in here off 60 and Cian claims seven pound. She is coming off a 92 day break and that wouldn’t worry me as she had just over a months break before the victory at Wolverhampton and prior to that had run well to be second off a long break aswell.

She will come into this race fresh and with luck in running will be hard to keep out of the frame. 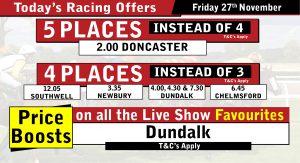 The step up in trip looks perfect for KING LENOX and for those of you who follow my previews you will be aware this horse has appeared before.

He is consistent around Dundalk and his form ties in with Irish Poseidon, Romann and Macaban City all of whom have been successful here in recent weeks. King Lenox again has had no luck with the draw but he is normally quick away and might just slot in here behind the leaders. The handicapper has left him on the same mark of 60 that he ran off the last twice and that gives him a solid chance.

I would expect a big run and if the step up in trip is to his liking he should take all the beating.

In terms of form for this race the standout form looks to be that of GIVE HER A SQUEEZE who has run third in a Group Three at Naas behind Mother Earth and Sussex Garden.

Since that Mother Earth has kept her form well in Group company and has since concluded her season by finishing second in the Grade One Breeders Cup Juvenile Turf at Keeneland.

Give Her A Squeeze followed her Naas run by finishing third at Gowran Park and she was doing all her best work at the finish. She has stepped up in trip each time but the mile around Dundalk could be the key to unlock her maiden success.

The one slight negative is that she flashed her tail when coming under pressure at Naas suggesting she may not be totally straightforward.

She has the best draw of the market principles and I expect her to go very close.

Don’t forget that we will be boosting the price of the favourite on the live shows in every race at Dundalk tonight! 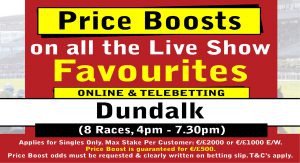 One of the standout winners in recent weeks around Dundalk was Isle Of Sark trained by Joseph O’Brien and not too far behind him in that maiden was the Michael Halford trained MIRAGE MORE.

She kept on well but didn’t have the pace to challenge behind an impressive winner and the step up to a mile here looks sure to suit. Her pedigree suggests a mile plus will be the making of this filly and she has a decent draw here and should sit behind the leaders and get a nice tow into the race.

She will be hard to keep out of the frame here.

GROVE ISLAND will need to be very smart to be able to give likely favourite and stablemate Russian River five pounds and still win on debut but he is one that I will be keeping a close eye on in the market.

This colt was bred by Noreen Mc Manus wife of owner JP and being out of No Nay Never and Mastercraftsman I would expect him to be pretty smart. It doesn’t look the strongest maiden if you take the likely favourite out of the equation.

There may be value with a forecast or the betting without but keep a close eye on this horse for the future.

It could be a quick double for owner JP Mc Manus with JO MARCH who caught the eye on debut at Leopardstown behind the Dermot Weld trained Eylara.

It is a big weekend for the owner with Andy Dufresne looking to improve his reputation even more when he takes on stablemate Envoi Allen in the Bar One Racing.com Drinmore at Fairyhouse on Sunday.

In terms of Jo March many of Josephs horses have improved from first to second run and she travelled well on bad ground and stayed on nicely. I don’t think she will have to improve much of the back of that to be successful here.

She will be my NAP on the card and should take a world of beating here.

MASTER MATT looks an interesting runner here with Sam Ewing maintaining the partnership after a very good second last time out behind Pulse Of Shanghai.

The form has been boosted a little with the ninth horse on occasion War Hero winning since. The one thing that really struck me about Master Matt is that he travelled lovely in front and it looked like Sam Ewing had got away nicely only to be caught by Pulse Of Shanghai. He was well clear of the third and a two pound rise in the weights looks fair.

I think similar tactics could be employed tonight and he could stay in front this time around. I think this race wouldn’t have as many improvers unlike Pulse Of Shanghai who was on a three timer.

Master Matt is a solid each way proposition here.

We finish the card with a two mile handicap and the unexposed BLUE SHADOW looks primed for a big run here.

When he won last time out he stayed on very strongly over a mile and a half suggesting that the step up in trip here shouldn’t be an issue. He has gone up 7lb and is effectively two pound wrong at the weights but I don’t think that will be an inconvenience. Conor Hoban should be able to let him travel away behind the leaders and use his stamina up the straight.

The form of his victory last time got a nice boost when Bluebeards Castle absolutely bolted up in a maiden here recently. If Blue Shadow does stay the distance he looks one to keep on the right side of, he may run up a sequence of victories.