Alan Marron is back to preview Mondays meeting at Dundalk Stadium.

We are back at Dundalk Stadium for the first of three meetings a week until the end of the month. We were unlucky not to get a nice winner on the board with Harriet’s Force on Friday who was second at 33/1. I am really looking forward to seeing my nap run so check it out below.

As always check out the specials and offers that available with Bar One Racing by using our Telebetting service or Online. I will be back again on Wednesday with another preview so keep an eye out folks.

We will be BOOSTING THE PRICE of the FAVOURITE on the LIVE SHOWS in EVERY RACE at DUNDALK today! 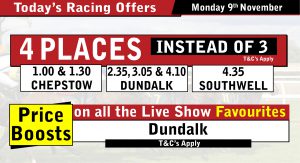 With question marks surrounding the trip for many of the runners TOUCH OF GOLD could run well at a big price for Conor Orr.

This mare is a course and distance winner of a handicap back in 2018 and while she has been slightly out of form over hurdles her second last run at Listowel wasn’t devoid of some promise.

Her last victory over hurdles was in September 2019 at Clonmel off a mark of 100 and in terms of this race if she was to come back to something like that form then she could go close.

It is quite a speculative shout but if she ran on to be placed it would be a decent effort.

The horse that caught my eye in this race is the Gordon Elliott trained TAKE A TURN with Sam Ewing aboard.

This horse ran over 1m 5f last time out at Cork under the same jockey and travelled well to lead inside the final furlong before the petrol gauge emptied and ultimately finished fourth.

Fujimoto Flyer who finished second on that occasion wouldn’t be a bad yardstick as she ran a good race behind the Paul Nicholls trained Solo in the Adonis at Kempton before winning a Listed Hurdle at Auteuil.

Take A Turn hasn’t won on the flat since 2017 but back in trip here and racing off the same mark I could see him going very close.

For those of you who follow my Dundalk previews you would have seen AASLEAGH FAWN being selected before and I think the step up to two mile could unlock the improvement needed to be victorious here.

With her stamina pretty much assured as she won over 1m 6f at Navan the booking of Shane Foley really catches the eye and it looks like connections are hopeful of a big run.

She was very unlucky at Navan this season when she tried to make all the running and to be only caught close home by the Gordon Elliott trained Lalipour.

The handicapper has dropped her a pound from her last run and I just think things didn’t go to plan for Sam Ewing. This time around Shane Foley will have her close to the pace and use her stamina.

She should give them all plenty to do and go very close.

PROVOCATEUSE looks the standout performer in this field and could give Shane Foley a quick double, this time for Jessica Harrington.

This filly has ran two very respectable races over five furlongs and has done all her best work in the closing stages suggesting a step up in trip is needed.

She caught the eye on debut at Bellewstown when she was waited with off the pace and ran on strongly to finish second to Lady Princess but just couldn’t get to the winner. She slightly disappointed me on her second start as I expected her to win well and again she looked to get caught a bit for pace and run on when she finished second to Grammata who overturned the form from Bellewstown.

The form from that race leaves a little to be desired but I think the extra furlong could make all the difference to this filly.

I think she will like the surface and looks the one they have to beat. She will be my NAP.

Sarah Lynam and Oisin Orr team up here with SABRINA FAIRCHILD who returns off a break and she just might be best caught fresh.

She returns here off a mark of 60 and I think she can be very competitive off that mark. She has proved tricky to just get her head in front and caught the eye on a couple of occasions at Dundalk Stadium getting no luck in running and staying on late.

She returned off a break to finish third of the same mark she will race off this time around so as long as there were so niggling problems that kept her off since March I would expect a decent showing.

She has a decent draw in stall five so Oisin should be able to track the pace and hope for luck in running.

Solid each way proposition in a tricky handicap.

Champion Apprentice Gavin Ryan got a right tune out of EGLISH when the pair combined last Friday night and should have no problem following up here over the slightly longer trip.

She was won off this mark over this course and distance before so if she comes here in the same heart she looks the one they all have to beat. The one thing that impressed me with this filly on Friday was her gutsy attitude to stick her head down and battle all the way to the line for Gavin. While it was a bunched finish I think she may have been value for more than the winning margin.

Ado Mc Guinness and Gavin Ryan have been in flying form this season and it should be another winner to add to the tally.

SASSIFIED deserves another chance for the team of Johnny Murtagh if you can excuse the run last time out at Naas when he finished well down the field.

The ground was heavy that day and he simply may not have handled it. His first two runs were full of promise, on debut he finished sixth at Leopardstown but was denied a clear run and when switched right he ran on nicely.

He followed that up with a decent performance when fourth behind Cadillac at Leopardstown and in that race, Aikido who looks the likely favourite here finished fifth. Cadillac has done his bit for that form by proving he is a smart colt and running well in the Breeders Cup last weekend.

Sassified looks overpriced on the back of his first two runs and could run on into a place.

While Breakfast Club looks a deserved market leader here, I think that there is one lurking that could potentially throw a spanner in the works.

ALLEZ SOPHIA has been campaigned at Listed and Group level by Paddy Twomey and this drop in grade could see her get her head in front.

She ran a very solid race at Cork in a fillies handicap behind A Step Too Far and watching that race back she did well to finish as close as she did as she got upset in the stalls beforehand.

On her next run she was out of her depth when she ran here at Dundalk in the Mercury Stakes Group Three.

The market will tell plenty of what is expected but I think she might just be the class angle into the race and in terms of the prices she could be the one to side with.