Alan Marron is back with four excellent selections for Breeders Cup Saturday.

We got a taster last night from the Breeders’ Cup but Saturday is always an excellent card and this year it is no different. I have put up four selections that will hopefully give us a good run for our money.

Check out all the markets on the website at Bar One Racing.com and either avail of all the specials and offers there or contact us through our Telebetting service.

Being quick from the gates proved beneficial last night for Golden Pal and this races looks no different.

The current track record holder LEINSTER looks overpriced in terms of his form and should go very close here under Luis Saez. This horse likes to track the pace and has solid form over course and distance.

His victory in a Grade Two at Keeneland last time out was impressive when he had Extravagant Kid in behind who also runs here. There is likely to be a very fast pace on and I think Leinster can just sit prominent and come with a late run.

The track and the going look in his favour and I think he should be slightly shorter in the market.

Our Breeders’ Cup markets for Saturday can be found here

This race could be laid out perfectly for Ger Lyons and Colin Keane and we could see SISKIN back to his brilliant best.

While one of the main issues could be at the stalls any clips of him from Keeneland in recent days suggests he is on very good terms with himself.

His victory in the Irish 2000 Guineas was very impressive as on the day it looked like he was going to be trapped behind a wall of horses and quickened clear when he got out. This race could be similar, Colin will no doubt look to get him travelling well from off the pace and come with a late run.

Going on what I seen last night at Keeneland with the likes of Mother Earth trained by Aidan O’Brien you can get rolling late and fast but this time around I’m hoping nothing will have slipped the field.

I think Siskin will appreciate the track and the pace could suit him down to the ground.

This would crown an excellent season for Colin Keane and Ger Lyons and hopefully Siskin can put his best foot forward. 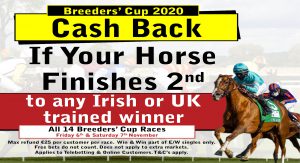 Dermot Weld has done an excellent job with TARNAWA this season and if she continues her improvement she could go close and give Colin Keane a quick double.

Unfortunately Christophe Soumillion who was due to be on board contracted Covid 19 so Colin is an able deputy.

Tarnawa is a filly that has really impressed me in her last two victories in Group Ones at Longchamp. The mix of staying power and turn of foot could be exactly what she needs to be successful around Keeneland. The form of her races has worked out very well with the David Menuiser trained Wonderful Tonight landing two Group Ones since finishing behind Tarnawa in the Prix Vermeille.

This looks an exceptional race with Magical and Mogul in opposition but I think Tarnawa may have too much tactical speed for them and give the master of Rosewell house another big day.

Will be very hard to keep out of the frame with luck in running.

I am really looking forward to this race as MAXIMUM SECURITY takes his place in the lineup.

This horse hasn’t been out of the first two in his career to date and looks primed for another big run over a trip that he is two outta two.

I am hoping they will make the running and get settled on the lead and kick as they turn for home because his staying power simply looks too much for the rest of the field. Last time out he was caught out by the pace behind his stablemate Improbable.

If we delve back into the form we see that Maximum Security was successful in Saudi Arabia at Riyadh and had the likes of Benbatl and Magic Wand in behind. Luis Saez will look to get prominent early and get him settled.

I think Maximum Security could have too much for this field and win impressively. 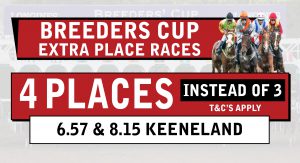