It’s the battle of two young, under-pressure head coaches, Ole Gunnar Solskjær and Frank Lampard. A win for either would help keep critics quiet. A loss for United would again have them scenting blood. Football is, after all, a well-paid but unforgiving business, even for club legends.

A disastrous start to the campaign – a 3-1 home defeat to Crystal Palace – has been arrested by their last two results – a 4-1 league win at Newcastle and an excellent 2-1 win in Paris in the Champions League on Wednesday against PSG.

However, a 6-1 home hammering by Tottenham three games ago and the fact that they have yet to keep a clean sheet in the league this season – both teams have scored in all four of their EPL fixtures, with those four games producing 23 goals – suggests that all corners have not been turned just yet.

They have, though, won five of their last six games.

Bruno Fernandes has scored three goals in four Premier League starts this season, two of them from the penalty spot. Marcus Rashford has scored four goals in six appearances (all comps).

Clean sheets are harder to come by for Chelsea than a poorly-run B&B and holding onto a lead is proving trickier than a youngster walking a lively greyhound.

That said, Chelsea have lost only one game this season (2-0 at home to Liverpool in September) but a calamitous first-half at West Brom (from which they salvaged a 3-3 draw) and a squandered 2-0 lead at home to Southampton last Saturday in another 3-3 draw show that they, too, are far from being the finished article.

Also, Chelsea have kept just 11 clean sheets in their last 44 matches and just six in their last 22 league games. However, new keeper Édouard Mendy has kept a clean sheet in each of his appearances so far for the Blues.

Chelsea’s five league games this season have produced 22 goals, with three of them landing ‘Both Teams To Score’ bets.

After a slowish start to his Chelsea career, Timo Werner has now scored three goals in his last four appearances. Kai Havertz has scored four goals in seven starts and Jorginho has chipped with three goals this season, all of them penalties.

United appear to have come through their midweek Champions League game unscathed. Eric Bailly (muscle injury), though, remains sidelined, but Harry Maguire (also a muscle injury) is likely to be fit. Word has it that Jesse Lingard is fit again, while the “niggle” that has beset Mason Greenwood may still keep him out. New signing Edinson Cavani has now completed a full week of training and is available for selection. Anthony Martial is suspensded.

Thiago Silva appeared to pick up a knock on Tuesday in the Champions League but Frank Lampard has played down injury concerns. Hakim Ziyech is fit again (he came on as a sub against Sevilla on Tuesday). Kepa Arrizabalaga will miss the trip to Old Trafford after picking up a shoulder injury in training.

Man Utd beat Chelsea at home (4-0) and away (2-0) in the league last season and also put them out of the EFL Cup (1-2) in London. Chelsea gained some compensation by beating them 3-1 in an FA Cup semi-final.

In eight of the last 15 league meetings at Old Trafford between these sides, one side has failed to score and just six have produced over 2.5 goals.

However, these games took place pre-coronavirus and, as the stats tell us, plenty of goals are being scored in the behind-closed-doors matches, with home advantage substantially diluted. There have been 177 goals scored in 50 Premier League games this season (prior to 3pm Sat 24 Oct), producing an average of 3.5 goals.

Shaky defences for these two sides, and a dilution of home advantage owing to games being played behind closed doors, means that Over 3.5 goals (7/5 with us as at 4pm on Fri 25 Oct) has been PRICE BOOSTED  to 7/4 (to a maximum stake of €50). Price subject to change. 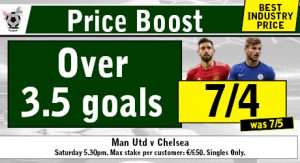