Just four wins in their last 15 league matches – and none so far this season (three losses and one draw) – means that it has been a lean time for the Clarets. Also, they have scored more than one goal just twice in those 15 games and haven’t scored in their two Premier League home games this season. Manager Sean Dyche’s thinly-disguised frustration at the lack of activity during the latest transfer window still hangs uncomfortably in the air.

A lacklustre opening-day defeat at home to Everton now seems a long time ago for a side that has gone unbeaten in nine matches since then. Yes, they are still capable of slip-ups, as their late squandering of a 3-0 lead at home to West Ham last Sunday can testify, and they have kept just one clean sheet all season. However, they have scored three-or-more goals in each of their last four matches and six of their last eight. Stability seems to be breaking out at the Tottenham Hotspur Stadium.

Jack Cork, Bailey Peacock-Farrell and club captain Ben Mee all remain sidelined. Phil Bardsley may have to miss out for Covid-related reasons and Erik Pieters is struggling with a groin injury. However, Matt Lowton is fit again and looks set to feature.

Erik Lamela and Giovani Lo Celso both played in the Europa League on Thursday so are in contention for selection. Dele Alli also got some Europa League playing time. However, Erik Dier (hamstring) remains sidelined, as does Japhet Tanganga (thigh).

The sides have met 18 times this century in all competitions, with Burnley winning on just four occasions and Tottenham ten times (but only three of them away from home).

Burnley are struggling to get their season into gear while Tottenham are going along nicely and, also, have plenty of goals in their locker. Heung-Min Son (10) and Harry Kane (10) already have 20 goals between them this season and they look good for goals again in what is likely to be a Tottenham win. 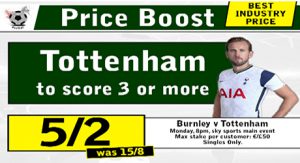