Alan Marron is back to preview a midweek meeting at Dundalk Stadium and its another cracking card.

We are back at Dundalk Stadium this week folks for a double helping of all weather action. We had a couple of nice winners last Friday with both Aidan O’Brien trained runners doing the business.

This time around there is plenty of form stacking up for the form students and a barrier trial that has worked out really well.

Anyone with a telebetting or online account with Bar One Racing can avail of all the specials and offers that we will have for another excellent card at the picturesque County Louth venue.

Trainer Shane Duffy teamed up with Sam Ewing to good effect last Friday night with the victory of a Moving Forward and we could see the same result here with PHOENIX OPEN.

This horse is a course and distance winner when trained by Ger Lyons and has some solid form on the turf recently. The last time we seen him at Dundalk he finished down the field over 6f in a race won by the Natalia Lupini trained Arnhem.

That trip was always going to test him and the step back up to 1m here should really suit. His last run has worked out nicely as he was third at the Curragh behind Takeachancejimmy and Excusio Joe. Excusio Joe went and won at Galway on Monday so that adds a little substance to the form.

The draw is the slight negative as he is out in stall fifteen but Sam should be able to slot him in and use his stamina close home.

This looks a weaker race that he has contested in recent times and it would be no surprise to see him go very close.

ADAMARIS really catches the eye here under Luke Mc Ateer who is having an excellent season and could get another winner on the board.

He looked value for more than the winning margin last time out at Leopardstown where he made most of the running and held on well to win by a head. It will be a lot harder to try and make all the running around Dundalk but he has a nice position in stall four and should be able to slot in behind the leaders if he doesn’t adopt prominent tactics this time around.

He has course form as he finished second in a nursery handicap behind the Johnny Murtagh trained Enchanted One so at least we know he handles the surface. He has a mandatory six pound penalty here and that shouldn’t stop him going close.

I think he will be hard to keep out of the frame and could give them all plenty to do if he makes the running.

Henry De Bromhead has his team in flying form over jumps and could add another nice two year old winner with the unraced CATENA ZAPATA.

This horse ran in a barrier trial at Dundalk back on the seventh of September where he finished a very creditable second behind Southern Lights trained by Joseph O Brien.

The form of this trial has worked out really well, Southern Lights went and finished second in a maiden at Naas behind Deputy Sandy trained by Jessica Harrington but the most noticeable thing was the market vibes for Southern Lights that day as he started a short priced favourite so must be held in high regard.

The third horse from the barrier trial was Supposedtobe trained by James Barrett and that horse ran a cracker on his debut finishing third to Carlisle Bay who went on to be placed in a Group Three next time out.

The fourth from the barrier trial was Soaring Sky and we seen her last Friday night at Dundalk Stadium put in an excellent performance to get up close home under Shane Foley for Jessica Harrington.

Catena Zapata looks very interesting in terms of all this collated form, he travelled well throughout the trial and when he got the gap he quickened nicely through it and just got beaten by a better horse on the day.

I think he will improve plenty from it and looks one to keep a very close eye on.

Market vibes will surely tell us plenty but he looks a smart individual and should give us a decent run. 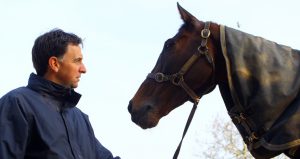 Henry de Bromhead has his team in flying form as the National Hunt hits top gear. He just might have a very smart colt in Catena Zapata.

REGAL EAGLE caught my eye on his last run over course and distance two weeks ago when he was slow away and in rear and stayed on well inside the final two furlongs to finish fifth behind the progressive Crystal Dawn who has won again since.

It would be great to see John Oxx get a winner before his training career comes to a close at the end of the season. Regal Eagle has taken a while to get his act together but it was much more like it last time out and the handicapper has left him off the same mark so if he can improve again he could go close here.

The second from last time out Tipperary Moon reopposes and Regal Eagle is slightly better off at the weights this time around getting three pound for just over two lengths.

This horse seems to like Dundalk so he should have a decent opportunity to go close here in what looks the weaker of the two divisions of this handicap.

Kevin Manning fresh from his success in the Vertem Futurity at Doncaster last weekend aboard Mac Swiney teams up with Pat Flynn on ACCESSORY and looks to have a good chance.

Having watched back replays of his geldings last two runs I think he just got bogged down in the ground and may appreciate the better surface around Dundalk.

The last time we seen him on the all weather Kevin Manning was aboard when he finished a close second to Chagall off the same mark that he will race off this time around. He looks one of the most consistent runners in the field and it will be disappointing if he is not I the firing line close home.

He challenged inside the final furlong over a mile on his last run here and the drop back to 7f should be perfect.

Will be extremely hard to keep out of the frame with some luck in running.

The battle to be champion jockey is ongoing and while Shane Foley has it all to do to catch Colin Keane he could get another winner on the board here with the consistent ANNA STRADA.

She was fourth last time out at the course over seven furlongs in a fillies maiden behind Allagar but I think the drop back in trip will really suit here and we could see a much better performance.

She has a lovely piece of form that has worked out really well from the time before at Cork. The winner that day was Magnanimous who finished second in the Star Appeal Listed Stakes at Dundalk while the second Amber Kite trained by Ger Lyons really impressed me last weekend coming late and fast down the wide outside in a nursery handicap at Leopardstown under Colin Keane.

Anna Strada handles the surface and she looks like she has a great chance of getting her head in front here.

This is something of a shot in the dark but the Patrick Tallis trained ODD VENTURE could be slightly overpriced based on his career so far.

His run last time out at Cork, which was his first time over a mile and a half wasn’t a bad run at all and ten fact that he was so far back as they turned into the straight he did well to get as close as he did finishing sixth.

He got a lovely split up the inside as they turned for home and he galloped all the way to the line. The handicapper has dropped him three pound for that run and Andrew Slattery claims three pound so he gets in here on a basement mark.

The blinkers are retained and if he can produce a similar staying on run like he did at Cork he could catch them all late on.

Sam Ewing has been in flying form in recent days with back to back doubles and could land another double here with first and last race victories.

AASLEAGH FAWN looks well handicapped on the basis of a run at Navan back on the 23rd June where she attempted to make all and was unlucky to get caught close home by the Gordon Elliott trained Lalipour.

Her first run back off a break should have got rid of the cobwebs and I think we will see a different mare this time around. She finished seventh to Final Endeavour who franked that form by winning at Galway on Monday.

This mare appreciates a sound surface and with Sam claiming 7lb it will bring her down to two pounds lower than her last winning mark.

I would expect her to go very close here.