Alan Marron is back to preview another cracking card on the all weather at Dundalk Stadium.

We are back at Dundalk Stadium with another cracking card featuring the Al Basti Equiworld, Dubai Pat Smullen Mercury Stakes (Group 3). It is lovely to see Pat Smullen remembered in a race so soon after his sad passing. He was successful in this race aboard the Reginald Roberts trained Timeless Call in 2013 and no doubt whatever jockey is successful here it will be a poignant moment.

Make sure you call into your local Bar One Racing Shop and check out all the offers and specials we have available for an excellent Friday night card.

FRANKUUS looks an interesting recruit for the Hilltop Racing team of James Mc Auley and Joey Sheridan. He cost £6,500 at Tattersalls back in August and on his handicap mark he looks like another very shrewd purchase.

This horse started his career with Mark Johnston and won on his debut at Haydock when he landed a novice stakes in decisive fashion. He is also a listed and Group Three winner so this is a distinct drop in grade.

He is a horse that likes a sound surface so the artificial surface at Dundalk should be perfect for him.

Should take all the beating here.

The team of Colin Keane and Ger Lyons won this race last year with Long Arm and they have a good chance of winning it again with the unexposed filly ELA KATRINA.

She was recently acquired from the stable of Roger Varian across the water and has won her two starts at Dundalk in nice fashion and should improve again here. In between that we saw her finish down the field in a very hot fillies handicap on Champions Weekend at the Curragh.

Her apprentice handicap win last time out was a decent victory with Sam Ewing aboard when she got up in the closing stages to lead close home.

She goes back up in grade here but the surface suits her and we could see a much better performance.

Trainer Ger Lyons will be looking for Ela Katrina to continue her progression here and give team Glenburnie another winner.

The Sheila Lavery trained STYLEDOME caught my eye on her last run when she finished fifth in a strong maiden at the track behind Inca Prince. She broke well to lead on that occasion and just ran out of steam inside the final furlong and faded into fifth.

This time around she is drawn in stall one and has blinkers applied for the first time and that might just help her concentration and she could have them in trouble from a long way out. She wasn’t beaten far in a claimer at Naas the time before that and she could still have improvement to come on her second start in a nursery.

She is likely to be a big price but I will be keeping a close eye on the market.

Kieran Cotter has his horses in fine form and his last two runners have been winners. We could see him make it another winner here with ST GEORGES HEAD.

He ran a very respectable race when third to Arnhem last time out when he had a troubled passage and ran on well close home. He steps back up in trip here to 7f and while it could stretch his stamina he could be helped up at the back of the field and come with a late run. He was dropped a pound in the weights from last time out and that should be more than enough to see him competitive here.

Adam Farragher who was on board last time out is on board this time again and the wide draw may not be as much of an inconvenience as it looks as he should be able to drop him in and get a good tow into the race.

Looks a solid each way contender here and should be hard to keep out of the frame.

TIPPERARY MOON could be the one to pay most attention to here as he has his second run after a break.

He performed with great credit last time out when finishing third behind Helen De Pourtales and Time and Money. He challenged inside the final furlong but had no extra inside the final fifty yards and ultimately faded to finish third. That was his first run in a handicap and there will be no doubt that he should improve off the back of that and go close here.

Time And Money franked the form a little last Friday night when he ran well to finish second behind the progressive Dame Rapide. He has gone up three pounds for that run and that should put him in contention here.

He should be hard to keep out of the frame with luck in running.

Michael Halford looks to have a very progressive filly here with SINDHIA and she should take all the beating after her victory last time out in a course and distance maiden.

She kept on well to break the maiden tag and while she will need to improve again to contend here, her mark of 78 doesn’t look overly harsh. The form of her maiden victory has got some boosts when the third placed Shawaf was placed since and the seventh Royal Pippin came out and won for Shane Donohue at Limerick last Saturday at 40/1.

Sindhia had some very strong maiden form at the start of her career and she looks to be a filly to keep on the right side of here.

She should be very hard to beat.

The feature of the night and all credit to Al Basti Equiworld to run the race in memory of the late Pat Smullen. Pat Smullen was successful in this very race back in 2013 for Reginald Roberts.

Philip Makin sends over a very interesting runner in the shape of MUKER from his Yorkshire base. Dundalk may well suit this horse as he has a prominent style of racing and has a nice draw here in stall seven. While it will take a very good run for a two year old to beat the older horses, this horse has some very strong formlines early in his career and should give connections a very good run.

A two year old was successful in this race last season and it could pay to follow the same route this time around. He broke his maiden at Newcastle on his debut when he made all to beat the Karl Burke trained Significantly. His trainer had very high aspirations next time out when he was seen in the Windsor Castle at Royal Ascot where he ran an absolute cracker to finished third behind Tactical trained by Andrew Balding.

We last seen him at York where he held on well to beat Credible in a novice stakes. The weight for age allowance could give him a very strong chance of going close here as he gets a stone from the older horses.

He should be a big price here but could be hard to keep out of the frame with Declan McDonogh on board. 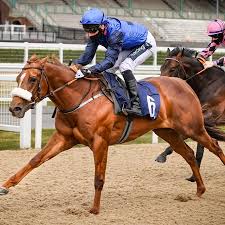 Muker could be an interesting runner for the Yorkshire based team of Philip Makin. (pic courtesy Philip Makin Facebook)

On paper this doesn’t look the strongest maiden but STALINGRAD looks like an interesting runner for the Stack team.

He was 7/4 favourite on debut when he finished second behind Soaring Monarch trained by Peter Fahey and then finished sixth on his last run at the Curragh.

This horse is by War Front and should appreciate the sound surface on the all weather and should go close here. There should still be some improvement to come while many of the opposition look thoroughly exposed.

This looks to be an ideal opportunity for this horse to get his head in front and with Chris Hayes on board he should take all the beating.