Alan Marron is back to preview Day Two of Irish Champions Weekend.

We failed to hit the target yesterday but we were extremely close with Sinawann who ran a cracker and had another placed selection with No Speak Alexander in the first race on the card.

The Curragh play host to day two of Longines Irish Champions weekend and the racing is simply incredible.  Group races galore and we finish with a very competitive handicap.

Folks, call into your local Bar One Racing shop and catch all the action live. There will be plenty of specials and offers throughout the day.

MR LUPTON who was a winner of a Group Two over course and distance last May showed a return to form last time out when third in the Great St Wilfred at Ripon and looks poised to go close here.

He is really well handicapped off a mark of 100 having won off 103 last season. He has been contesting some very strong group and listed races and could not have a better jockey on board at the moment than Colin Keane.

This horse will need plenty of luck in running as he likes to be delivered late but there is no doubt raiding trainer Richard Fahey will have him in prime condition.

Strong each way possibility in a competitive opening handicap.

It could be a quick double for Colin Keane on the card with LEMISTA who has proved to be a filly on the up this season and could land another nice pot here.

She is unbeaten this season with a couple of Group races and a listed success to her name and the track and ground should prove to be no issue here.

What really caught my eye last time out at the Curragh was the way she finished her race, she travelled well and quickened up nicely. The step up in trip looks sure to suit and she will be very hard to keep out of the frame here.

I’m surprised by her price as she has the beating of a shorter market rival in One Voice on form from earlier in the season.

Colin should be able to get her into a rhythm and produce her late and fast down the outside.

This race will really depend on the ground conditions and the one horse that could enjoy any rain that may be around is the John Quinn trained LIBERTY BEACH.

This filly had some very smart form at two and had run some creditable races this season behind the likes of Battaash and A’Ali, with the latter taking her on here again.

A strong pace looks likely in this race and she should travel into it really strongly. The only slight negative is that when push came to shove last time out at Goodwood she found very little. She raced very freely that day and it will be interesting to see if Jason Hart can get her to travel early on here.

She was fourth in a Queen Mary at Royal Ascot last season before beating Alligator Alley in the Molecomb at Goodwood.

She will likely need to improve off the back of her last run but she makes plenty of appeal to me at the prices and will be hard to keep out of the frame.

I was very impressed with TERESA MENDOZA on debut and I will give her another chance to improve her reputation here after a respectable second in the Round Tower last time out.

She got run down late on in that race by the 66/1 shot New Treasure trained by Jim Bolger. She done very little wrong on that occasion and may improve off the back of that run. The only thing that slightly worried me from her last run was she didn’t travel as strongly as her debut.

This race should be run to suit and she will be played slightly later this time around. She will be very hard to keep out of the frame.

This looks to be the standout two year old race of the season and the Jessica Harrington trained LUCKY VEGA will be extremely hard to beat.

He will have two very worthy adversaries in Master Of The Seas trained by Charlie Appleby and Battleground trained by the master of Ballydoyle.

Lucky Vega was simply electric on his last run when he landed the Phoenix Stakes in impressive fashion. He reversed form with Laws Of Indices in no uncertain terms and if he can improve again we could see something very special here.

If you watch the replay of the Phoenix Stakes you will see Shane Foley struggle to pull this horse up after the line so he had plenty left to give. He travelled so well that day and the turn of foot was very smooth.

If he arrives here in that form then they will all need to produce a very good performance to get close.

The bet of the day for me and will be very hard to beat.

Jessica Harrington looks to have a very promising colt on her hands in Lucky Vega.

The Willie Mullins trained MICRO MANAGE is a very interesting runner here on what will be only his fifth career start.

He returned from a long layoff last time with a very eye catching run when third to Delphi and Master Of Reality in a trial for this race. Willie Mullins knows what it takes to win this race having landed it in 2016 with the ill fated Wicklow Brave.

Micro Manage could have had training issues but this race looks to have been the target and if he can improve off the back of his last run then he makes plenty of appeal.

He won his maiden in nice fashion before absolutely bolting up in a handicap at the Curragh last season.

He is the least exposed in the race and looks a very interesting runner.

The man of the moment Colin Keane is on board and it looks like he may have a very good day. 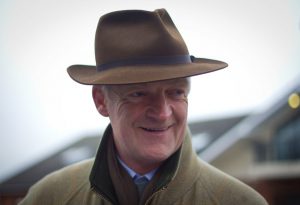 Could Willie Mullins be all smiles when Micro Manage lands the Irish St Leger?

As normal these sales races produce a full field for an excellent pot and it is no different here. It looks a very competitive renewal but I like one here at a very big price.

BELLE IMAGE trained by Sheila Lavery was a filly that I selected for a recent Dundalk preview after she produced a very taking performance in a barrier trial at the County Louth venue prior to her debut.

Belle Image got caught in behind at Dundalk last time and the kick back was that bad on that occasion then I would completely ignore the run and give her another chance here.

She may improve off that run and a first run on turf may be more to her liking. She finished sixth at Dundalk last time and the form has been franked with the third and fourth going on to win next time out.

She would be a small each way play here at a very big price.

A very competitive end to Irish Champions weekend but we have seen some excellent racing and the final race on the card will hopefully be a cracker also.

INSIGNIA OF RANK is in my notebook quite a while and I am surprised how big a price he is as he showed a return to form last time out.

I was keeping an eye on his entries for this weekend as I was sure John Murphy would target something at Champions Weekend.

The most interesting thing for me last time out is that he got headed and lost a bit of ground and then tried to rally again. He looks back to form and looks a solid each way play.

I am surprised by his price and he may get shorter in the market before the off. A well handicapped runner to end the day could pay dividends.